A teenager who became a trampolining champion despite losing both her arms and legs to meningitis has been honoured with a national award.

Brave Isabelle Weall, 14, picked up a Pride of Sport Award after becoming one of the country’s best young trampolinists despite her disability.

The inspirational youngster won the Young Achiever category at the ceremony which recognises and celebrates the unsung heroes of grassroots sport.

Seven years ago Isabelle was rushed to hospital when she collapsed just hours after going to school as normal.

Her parents Oliver Weall and Catherine Lloyd, both 43, were warned she had just hours to live after she suffered a heart attack and multiple organ failure.

She battled back but surgeons were forced to amputate both arms and legs after she was diagnosed with bacterial meningitis.

When she recovered from surgery she spent more than two months in hospital and a further eight months in a wheelchair before being fitted with prosthetic limbs in 2011.

The schoolgirl picked up her latest award during a glittering ceremony at London’s Grosvenor House on Wednesday (22/11).

She has also been inspiring other teens suffering hardships by launching her own YouTube channel in which she does her own beauty tutorials. 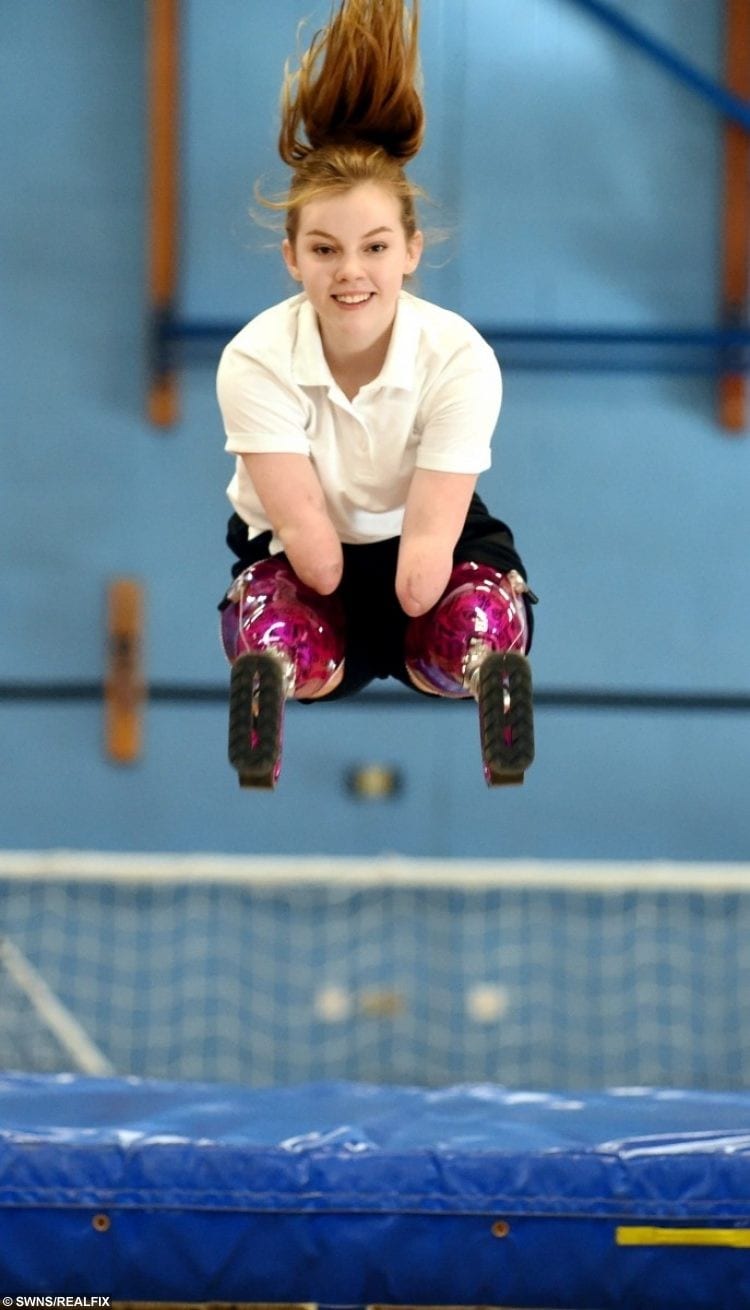 Isabelle of Oakwood, Derby, said: “You should always give something you want to do a go.

“I’d always liked the idea of trampolining and my school had a club after school and my friends went I really enjoyed it so continued to go.”

Isabelle was given just hours to live when she was struck down with meningitis at school in September 2010.

Mum Catherine, 43, said: “It was so quick. She went to school that day and she got sent home ill at 11am.

“We called an ambulance at 8.30pm and she was taken to Derby Hospital.

“She was then transferred to Nottingham Hospital, and her heart actually stopped in the ambulance. She had total organ failure and we were told she would die.

“They had to give her a shot of adrenaline to keep her alive, they gave her a less than 1 per cent chance of surviving.

“But somehow she survived. The top consultant said she was the sickest child he had ever treated, who had managed to pull through.

“She was in hospital for two months after that, and was in a wheelchair for eight months. 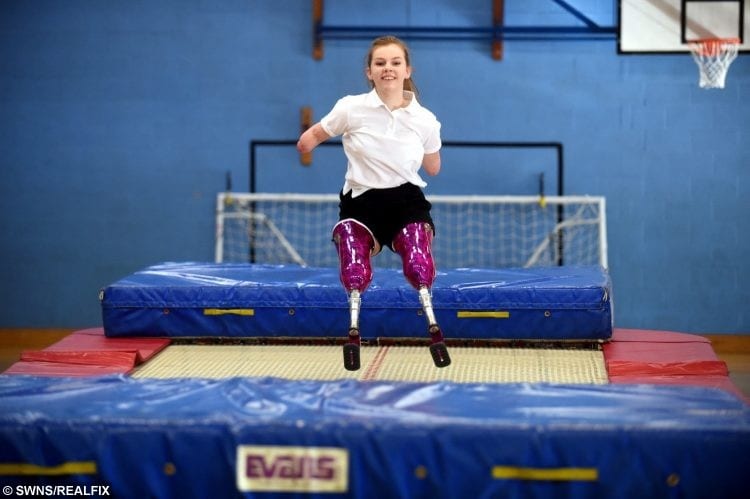 “We were sure she would never walk, but she was so determined. When she was given her legs she got straight up and started walking right away.

“Now she doesn’t need her wheelchair at all.

“She started trampolining just because her friends were doing it, and she wanted to go along. She doesn’t see herself as disabled and wants to do everything they do.

“She wasn’t sure if she’d be able to do it, but luckily her teacher was amazing with her and got her doing routines.

“Izzy goes after school once a week, then practices her moves in the garden on our trampoline.

“Twists are really hard for her, and she can’t do any flips because the blades might chop her head off.

“It’s incredible how well she’s done so quickly, we don’t know if there are any international competitions but she’s going to just keep going with it.

“She is very thick skinned and determined and if someone gives her a challenge she will prove them wrong.

“Some people say to us it must be so awful for Izzy to have lost her limbs but we are lucky to have her with us regardless, we are so grateful we still have our daughter.” 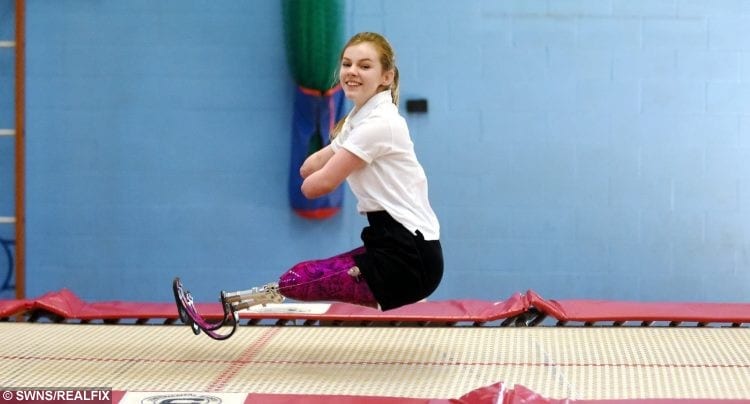 Dad Oliver, a manager at Rolls-Royce, said: “It’s inspiring to see what Izzy has achieved.

“The sky’s the limit for her now. We are all very proud of her.”

The judges of the event, which is sponsored by TSB, said: “Isabelle is such a determined young woman, and her spirit and positivity really shine through.

“She is absolutely inspirational.”

Host Ben Shephard said: “Grassroots sport brings people together and represents so many of the things we love about this country.

“We all start somewhere, whether that’s children taking up a sport, or someone who hasn’t exercised for years taking their first steps towards getting fit, and these awards celebrate the amazing people who make that possible.”

Jennie Price, Chief Executive of Sport England, said: “We want everyone, regardless of age, background, or level of ability, to feel able to engage in sport and physical activity, and the unsung heroes honoured in these awards are the people who help make this happen across the country week in, week out.

“Whether it’s as volunteers running clubs and coaching, or as participants inspiring others by way they push themselves to overcome barriers, they all thoroughly deserve this recognition.”