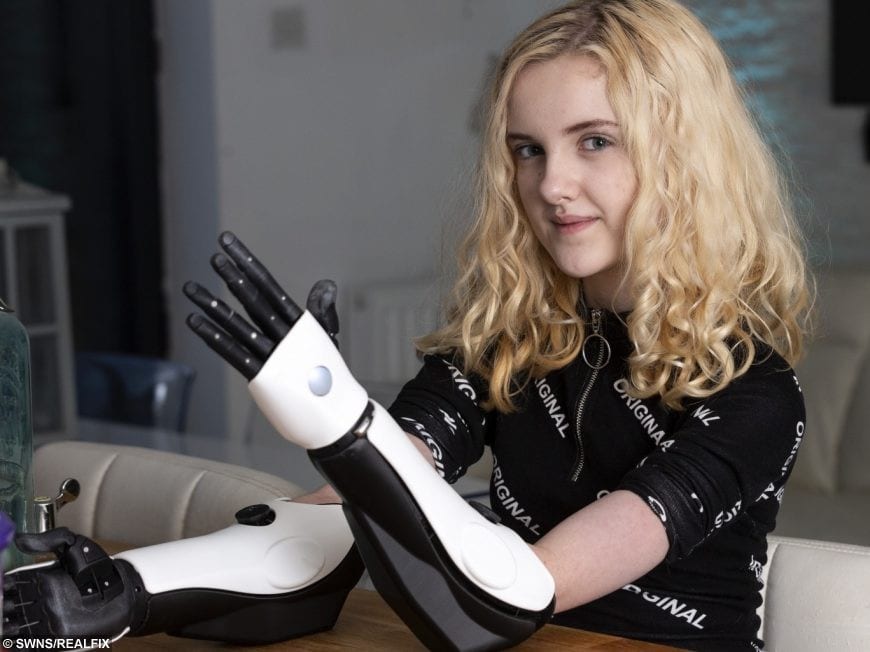 This incredible video shows a teen who lost both hands to meningitis as a baby completing her makeup routine – using a BIONIC ARM.

Tilly Lockey, 13, can put on her eyeliner, use makeup brushes and blenders effortlessly without any assistance.

The inspirational girl has devoted her time over the years to raising awareness of the complications that can follow meningitis.

She needed 10 blood transfusions and lost both of her hands after contracting meningococcal septicaemia at just 15 months old. 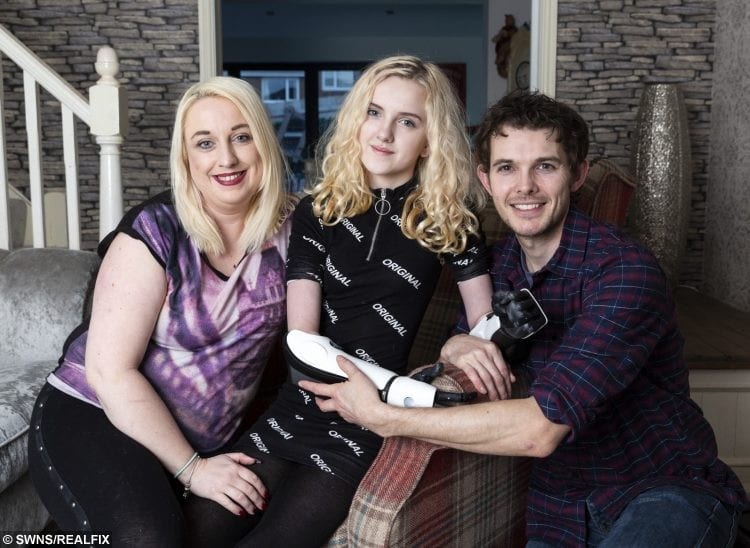 Tilly was given a 0% chance survival by doctors but defied all of the odds to survive the deadly disease.

She has previously been given bionic arms with basic functions and also trialled several others.

But at Christmas 2018, Tilly was given her first set of comic book inspired ‘hero arms’ by Bristol-based technology company Openbionics.

The high-tech limbs can function as normal hands and were tailor-made for Tilly on a 3D printer.

The bionic arms are the first medically approved prosthesis of their kind in Britain and allow for precise and delicate movements that other prosthetic hands cannot do. 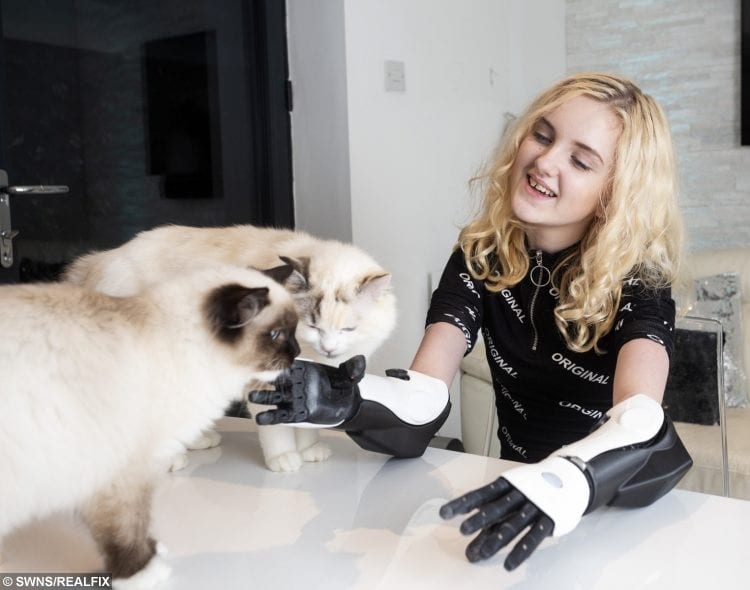 Tilly uses the arm to paint, play games and to give a ‘thumbs-up’ to her friends but she has also started to use them to put on her own makeup.

She has followed makeup blogs and now posts tutorials and videos online.

Her mum Sarah Lockey, 39, who works for the charity Meningitis Now which supported her daughter, said: “She finds the arm so useful.

“Tilly posted a video doing her makeup on her Twitter last year and everybody seemed to love it.

“She mainly started to put makeup on when she became a teenager so the arm has been such a huge help.” 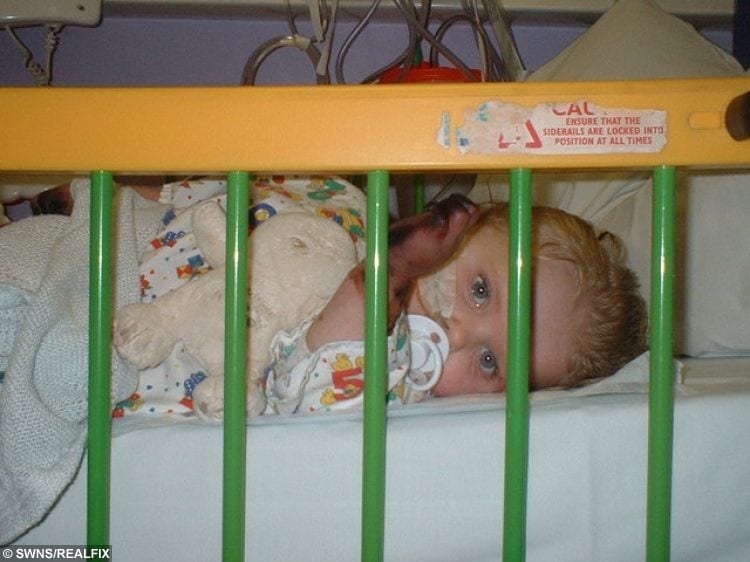 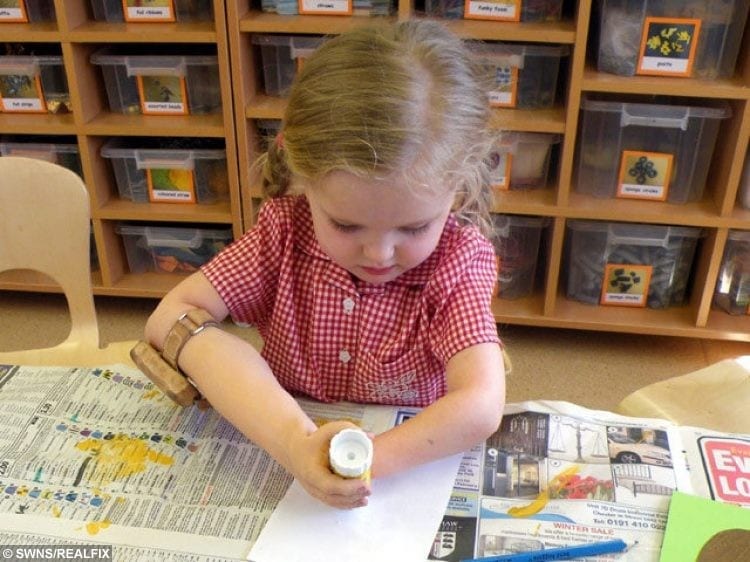 Tilly Lockey, 3, at nursery using an electronic arm in 2008.

Tilly lost both of her hands and the tips of her toes when she contracted meningococcal septicaemia.

Aged just three-years-old, Tilly got a pair of ‘myolectric arms’ which only had basic functions of control.

For years after the surgery, Sarah desperately tried ways to get her the best prosthetics, fundraising and researching.

However, in 2016, Tilly was the first child in the world to be given trial ‘bionic arms’ by Bristol-based technology company Openbionics.

The new ‘hero arms’ – given to Tilly in 2018 – use sensors within the casing to respond to movements by Tilly and are designed to have all of the same functions as a usual pair of arms.

It means Tilly can now interact with her friends and family – including her father Adam Lockey, 38, and sisters Tia, 15, Lucyanna, 11, and Hermione, seven – in the same way as any other teenager. 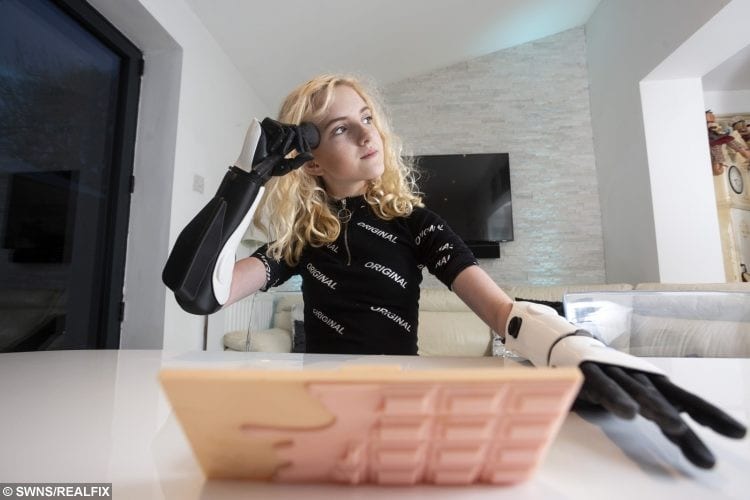 Her mum Sarah, from Consett, County Durham said: “She can do everything with the arms.

“When she was diagnosed with meningitis as a 15-month-old I was told she had no chance of survival.

“To see how far she has come is incredible, I am so proud of her.

“She can use the arm just like anyone would use their hands.

“She now realises how much she can actually do with her ‘hero arm’ and she uses it for everything in everyday life.

“Tilly has become a triallist for the company now so she gets sent different designs and is used to test them for other children.

“She has tested around eight different designs since 2016 and they can then be altered and developed to be better for people in the same position.”

Tilly has had incredible experiences throughout her life including meeting the Dalai Lama.

She has also appeared on hit ITV show ‘This time next year..’ where she showed the amazing difference being given her bionic arms had on her life. 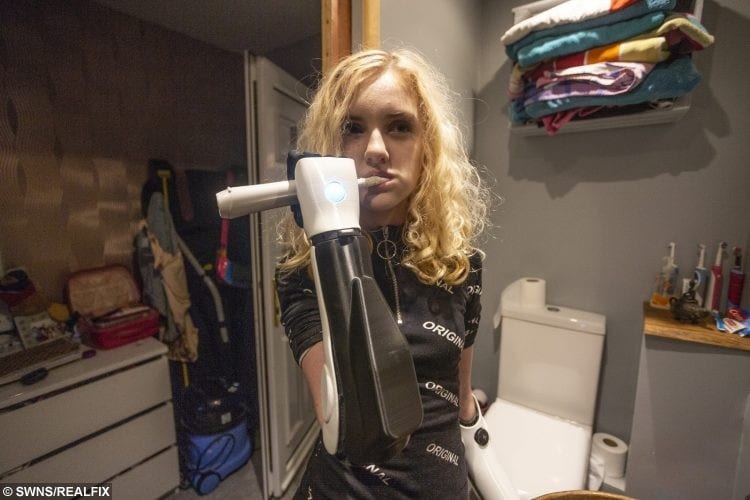 Last week, Tilly even headed to London to model her hero arm at the premiere of Alita: Battle Angel in the West End – complete with a custom arm to become the character.

Sarah added: “She has achieved so much already in her life.

“We just want to keep raising the awareness of everything she went through and how much these arms can help children.

The ‘hero arms’ cost approximately £10,000 per arm to purchase, although Tilly has been given multiple different sets to trial due to her role as an ambassador for the company.

Tilly said she loves the simple things about the arms – including being able to hold two items at once.

She said: “I really love how I can now hold two things at once.

“It sounds really simple and it is probably what a lot of people take for granted but to me, to be able to hold a book in one hand and a pen in another while I’m studying is great.

“I also love how cool they look, they’re lots of fun and I’m proud to wear them.”