Olivia Farnsworth from Huddersfield, West Yorks., See Ross Parry Copy RPYBIONIC : Doctors have dubbed a seven-year-old with a rare disorder the "bionic girl" - because she doesn't feel tired, hungry or even PAIN. Unique Olivia Farnsworth has a rare chromosome condition that has left medics and her family stunned. It is thought she could be the only person in the world to exhibit the three symptoms together. When she was diagnosed, the consultant geneticist told mum Niki, 32, she had never seen the disorder before. 15 january 2015

Doctors have dubbed a seven-year-old with a rare disorder the “bionic girl” – because she doesn’t feel tired, hungry or even PAIN.

Unique Olivia Farnsworth has a rare chromosome condition that has left medics and her family stunned.

It is thought she could be the only person in the world to exhibit the three symptoms together.

When she was diagnosed, the consultant geneticist told mum Niki, 32, she had never seen the disorder before.

The condition means she never feels hungry or sleep or pain and can go three days and nights without sleep.

She was also once run over by a CAR and couldn’t feel any hurt from her injuries.

Mum-of-five Niki, of Huddersfield, West Yorks., said: “Doctors have called her the bionic girl, she’s made of steel. She’s got no sense of danger.

“She got run over and dragged down the street by a car and she didn’t complain.

“She was dragged about ten car lengths down the road. It was horrendous, I don’t think it’s something I will ever get over.”

“I was screaming and all my other children were screaming as she ran out.”

“But Olivia was just like, ‘What’s going on?’. She just got up and started walking back to me. The hospital said she’s bionic.

“Because of the impact she should have had severe injuries. She had a tyre mark on her chest. But her only injuries were she had no skin on her toe or her hip.

“The doctors were busy giving her CT scans, x-rays, trying to find injuries but there was nothing. She was really lucky.

“The doctors think what saved her from injury was she didn’t tense up.”

Full-time single mum Niki explained that from time time when Olivia was born, she knew she was different to her other children.

“I’d already had two children before Olivia arrived so I knew she wasn’t the same.”

“She didn’t sleep, but I put that down to her being a fussy baby. At about nine months old she stopped napping during the day.

“But as she got older, she never needed sleep. She survived on about two hours a night sleep and was never tired.

“I’ll always remember when she was five and started school, I saw her yawn for the first time. I was so excited, I’ll never forget it. I thought to myself, finally she’s tired.

“Finally, I’ll be able to get some sleep, I thought. Because it wasn’t her that suffered without sleep, she never needed it.

“It was just me who needed the sleep. After about two hours she would be up and out of her room.”

“She’d make any excuse not to sleep – she didn’t like the colour of her carpet, her curtains, her bedding.

“About six months ago she was put on medication to help her sleep. Now she gets about six hours a night.

“She didn’t feed, when she was nine months old she started rejecting my milk. I thought she didn’t like it but since then, she’s never liked food.

“She’s almost become conditioned to eat, she eats at school because everyone else does but she doesn’t really need it. She never gets hungry.

“At home she will go through phases of eating the same thing for months and months and then go off it – once it was milkshakes, once butter sandwiches, once chicken noodles.

“As a baby I always said she was made of steel as she never cried,” said Niki. “I never thought she’d feel no pain, it was just a joke.

“I remember when she was at nursery, once day they rang me and told me she’d fallen and her bottom teeth had gone through her bottom lip.

“When I arrived to take her to hospital, she wasn’t even crying.

“She had to have plastic surgery and when the surgeon was examining her, he was pulling her lip and she wasn’t even flinching.

“He said to me, there’s something not right about her.”

Niki, also mum to Ella-Mae, 12, Bradlee, 10, Archie, six and four-year-old Poppy, said: “She had bad colic and her hair didn’t grow. She had no hair until she was about four-and-a-half. People called her a boy all the time.”

Another struggle for Niki is her daughter has been prone to occasional outbursts and violence.

But despite all this, Niki said Olivia is a happy little girl.

“She doesn’t let any of this affect her – because for her, she’s normal. She’s never experienced pain, or hunger, or tiredness.

“But it was such a battle for us to find out what was causing her symptoms. The doctors had no idea what could be wrong with her.

“This is why I want to raise awareness or chromosome 6 problems.”

“To look at Olivia you don’t know anything’s wrong with her. I want people to know and to stop judging.”

Niki and Olivia have been supported by chromosome disorder support group Unique.

Little Olivia’s condition is described as chromosome 6 deletion but the mix of super-human abilities has never been reported before.

There are dozens of more rare disorders which can cause developmental problems.

About one in 200 babies is born with a rare chromosome disorder but each one can be very different, making them exceptionally rare. 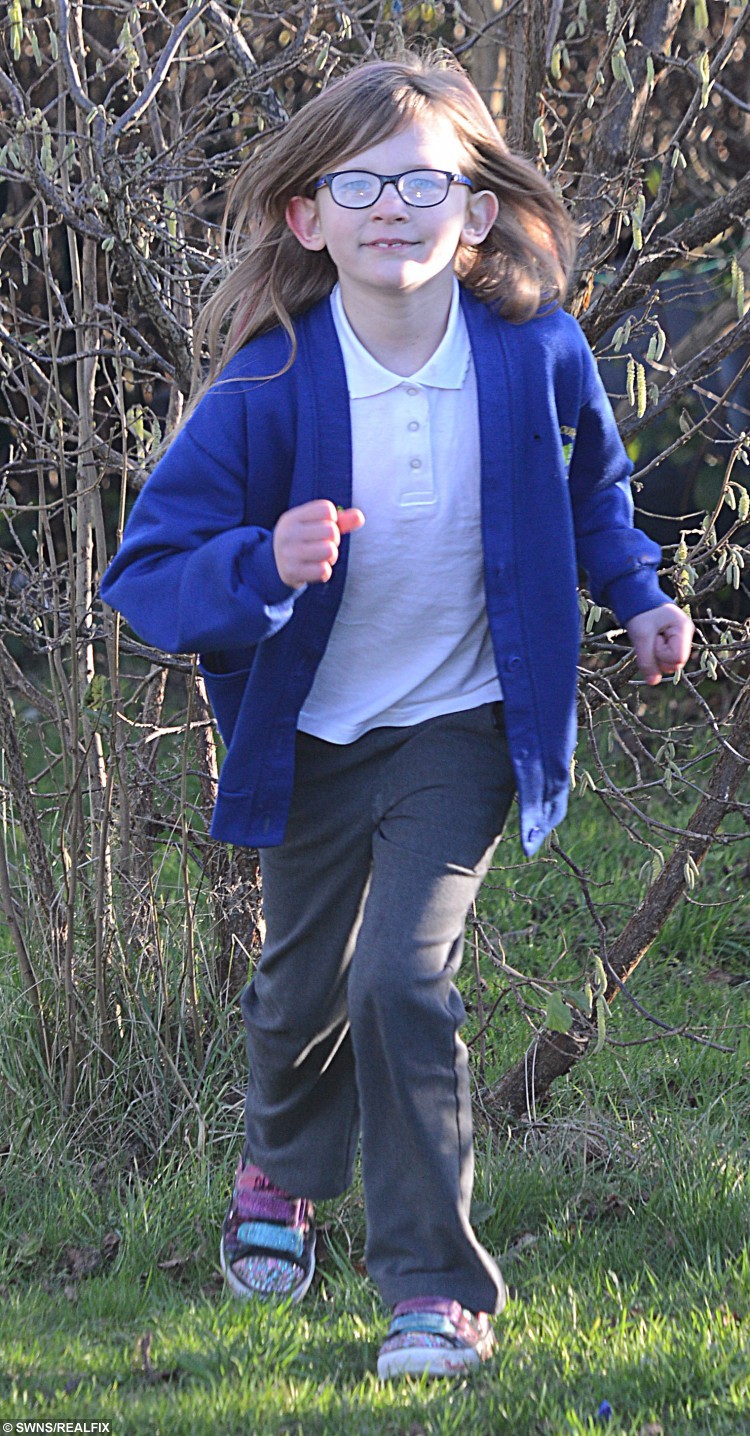