The incredible reason why this mum goes into labour EVERY MONTH!

Collect of Sophie Loader with her son Chase. See SWNS story SWLABOUR: A young woman keeps her boyfriend’s pulse racing every time she gets her period – because she goes into LABOUR. Sophie Loader, 23, suffers debilitating labour pains every time she has her period – which last up to 72 HOURS – because a rare medical condition means she was born with two WOMBS. The medical marvel is struck down by painful contractions every month which mimic perfectly labour pains, because her second womb fills with blood – mimicking a full-term baby. Sophie, of Chelmsford, Essex, was born with uterus bicornis, meaning she has two separate wombs but one vagina – and the only way she can cope with the pain is through breathing exercises.

A young woman born with two wombs has a rare condition which means every time she gets her period – she goes into ‘LABOUR’.

Sophie Loader, 23, suffers debilitating labour pains at her time of the month – which last up to 72 HOURS.

She is struck down by painful contractions every month which mimic perfectly labour pains, because her second womb fills with blood – mimicking a full-term baby.

Sophie, of Chelmsford, Essex, was born with uterus bicornis, meaning she has two separate wombs but one vagina.

The only way she can cope with the pain is through breathing exercises.

The mum-of-one said: “I’ve been in labour more than 100 times, but only once for real.To say that it’s a pain would be an understatement.

“When I was 13 and the contractions started, I had never felt pain like it and couldn’t understand what was happening to me, it was terrifying – even the doctor thought I might be pregnant.”

She said: “When I had Chase I was drugged up to the nines for my c-section, so sadly I can’t compare the pain of real labour to my fake contractions.

“But I wouldn’t wish this on any woman.

“One labour is more than enough.”

When Sophie was 13, she started her period but with it came excruciating pain.

She said: “I was doubled over in agony and my mum had to call an ambulance. It was terrifying and felt like my insides were being ripped apart.”

After months of tests, doctors finally told Sophie that she had two wombs.

While the left womb was healthy, the right side would fill up with blood each month and trick her body into thinking it was giving birth.

She said: “I was hospitalised more than 30 times because I couldn’t cope with the symptoms. Each time they would give me gas and air to control the pain.

“In the end, all doctors could do was teach me how to control my contractions using breathing exercises that real women in labour use.”

After the birth, Sophie had the contraceptive implant fitted and now only goes into ‘fake labour’ once every three months.

She said: “Being is labour once a month for eight years was exhausting.

“You’d think it would be enough to put me off having a baby. But ever since I was a little girl, I’ve wanted to be a mother.”

“There were times when I wanted to give up, but I am so lucky to have Chase.

“That being said, I don’t think I’ll be having another baby any time soon.” 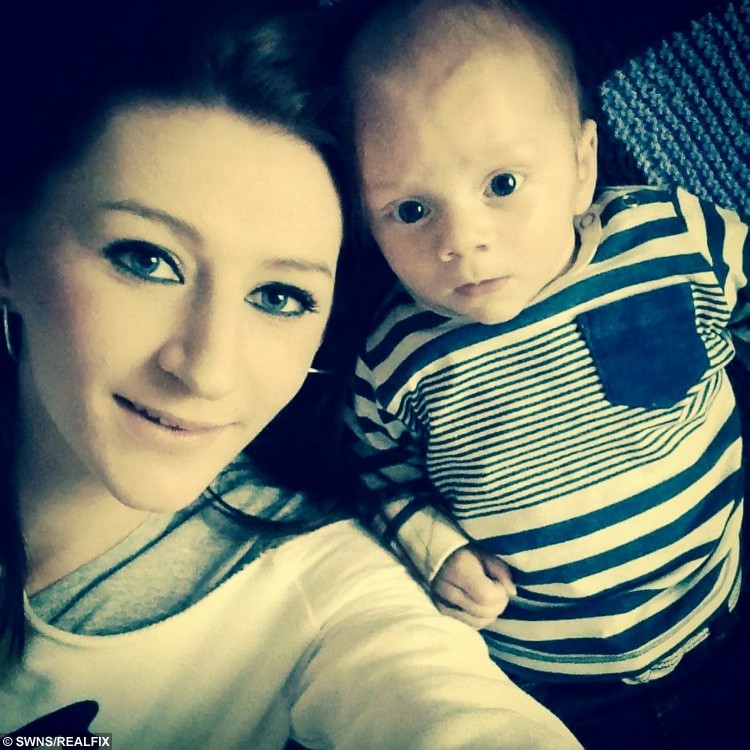 Shock Pic! Tipsy night out ends with woman’s face impaled on a BROLLY