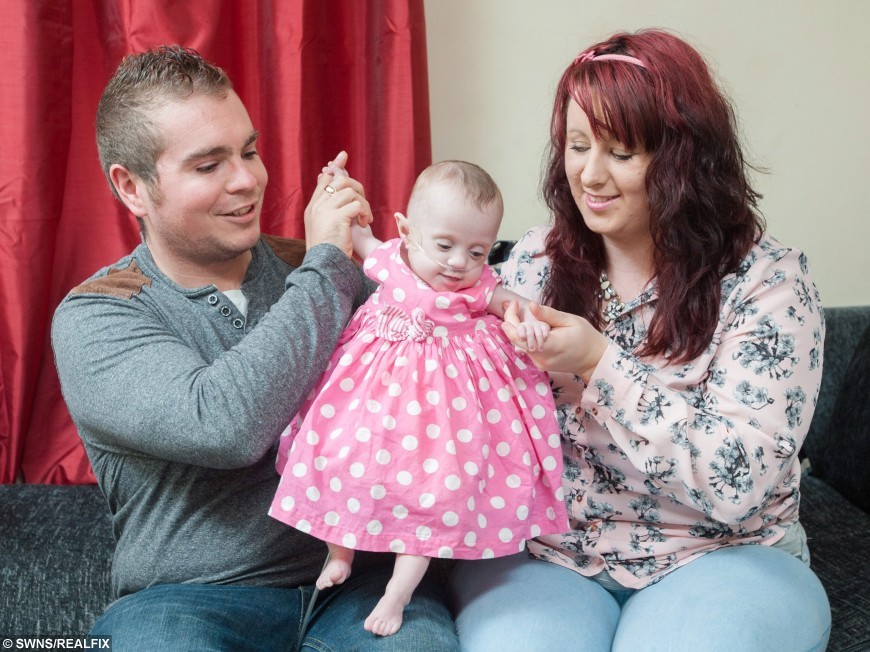 A miracle baby born a week before the abortion limit and given just a ONE PER CENT chance of survival has defied the odds – and is thriving at eight months old.

Tiny Kaci-Rose Cratchley was delivered naturally at 23 weeks and weighed just 1lb and 2oz – half the weight of a bag of sugar. 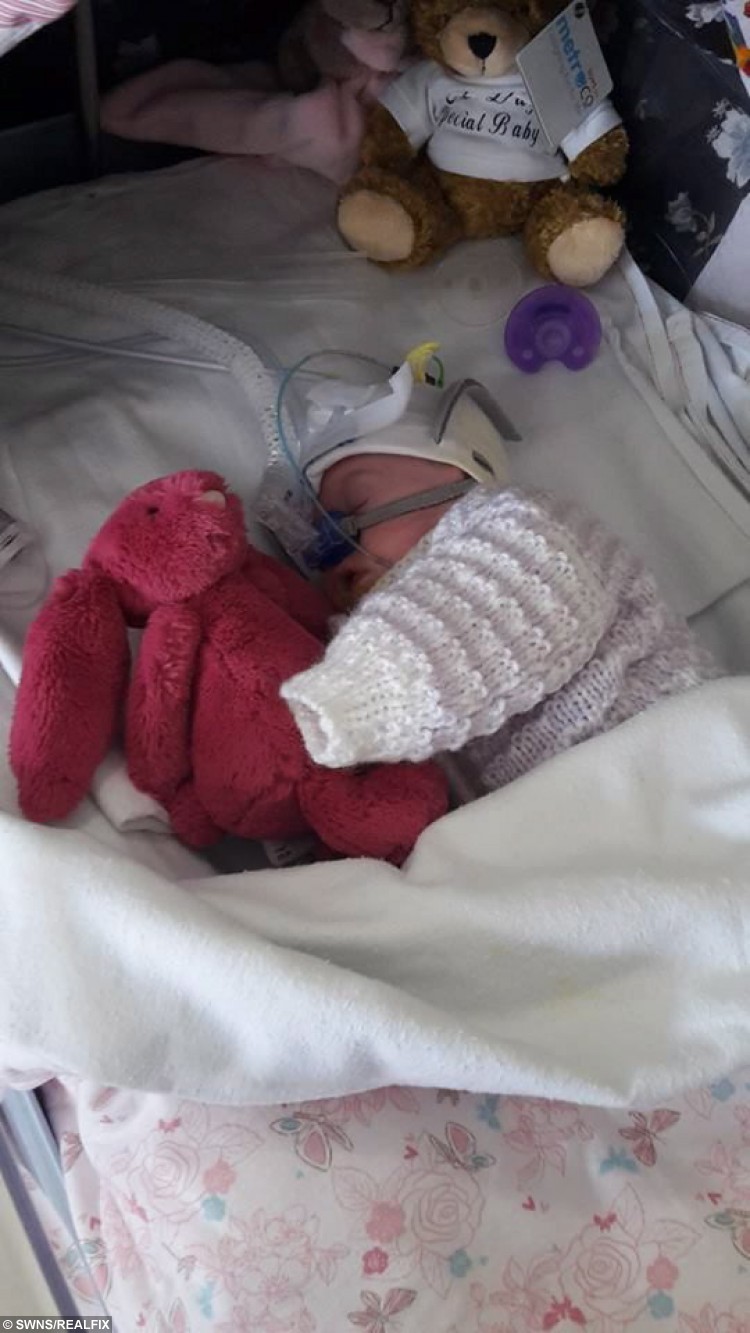 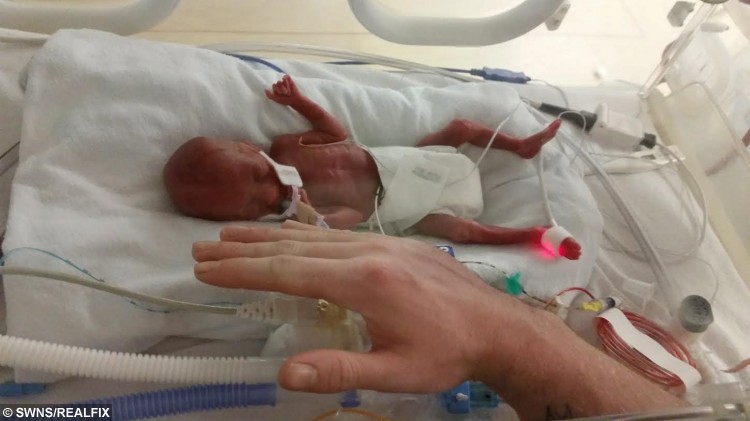 Doctors said that if she had gone into labour one day earlier they would not have tried to save her – and warned there was a 99 per cent chance she would die during delivery.

But Kaci-Rose defied all the odds to survive for eight months and now weighs just over 8lbs – the same as a newborn.

Sadie, 20, said: “She was literally the size of my hand when she was born. She was bright red and her skin was really sticky. You could see all her veins.

“I don’t know why I went into labour so early, but if I had gone into hospital a day earlier they would have sent me home to have a miscarriage.”

“They wouldn’t have even attempted to do anything at 22 weeks and six days, but my birth was all normal and after that the chance of Kaci-Rose surviving went up to 25 per cent.”

Sadie said her pregnancy had gone smoothly until she was rushed to Musgrove Park Hospital in Taunton, Somerset, after noticing blood. 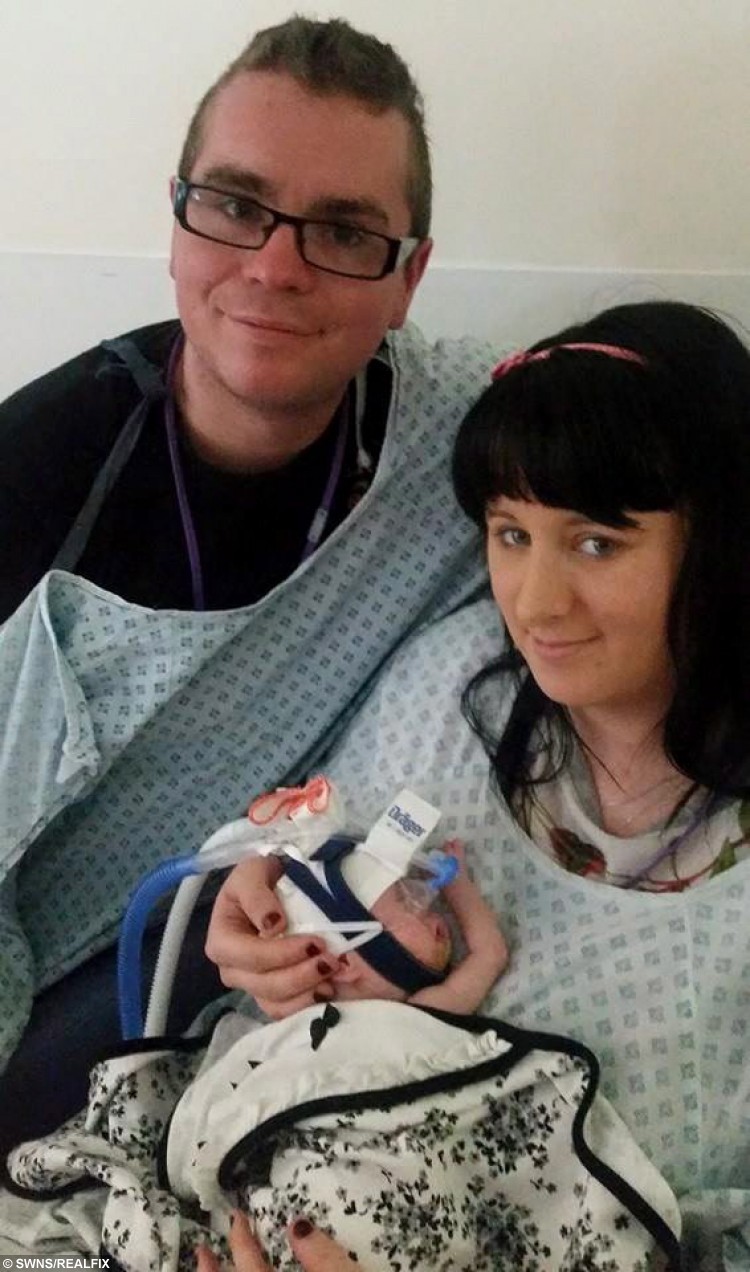 Kaci-Rose with her parents Marc and Sadie 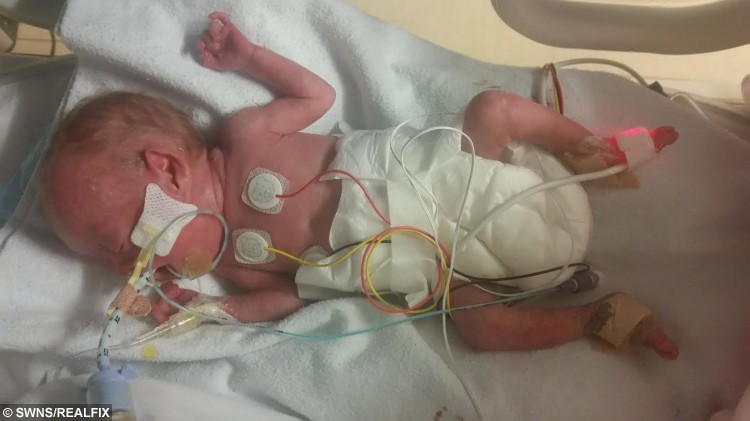 She said: “By the time I got to the hospital I was 4cm dilated. I was quite drugged up but I was terrified.

“We were told there was a one per cent chance of her surviving labour. When they told me that l I just cried and cried.

“The doctors asked us to decide whether we wanted them to try and save her or not.

“They told us that they could try but that she probably wasn’t going to make it. It was a terrifying moment but it wasn’t really a decision that needed to be made.”

Kaci-Rose was put on a ventilator and transferred to the neonatal unit at Southmead Hospital, Bristol, just hours after birth.

She was attached to tubes to help her breathe because her lungs were so tiny and underdeveloped, and was put on medication to help her struggling kidneys. 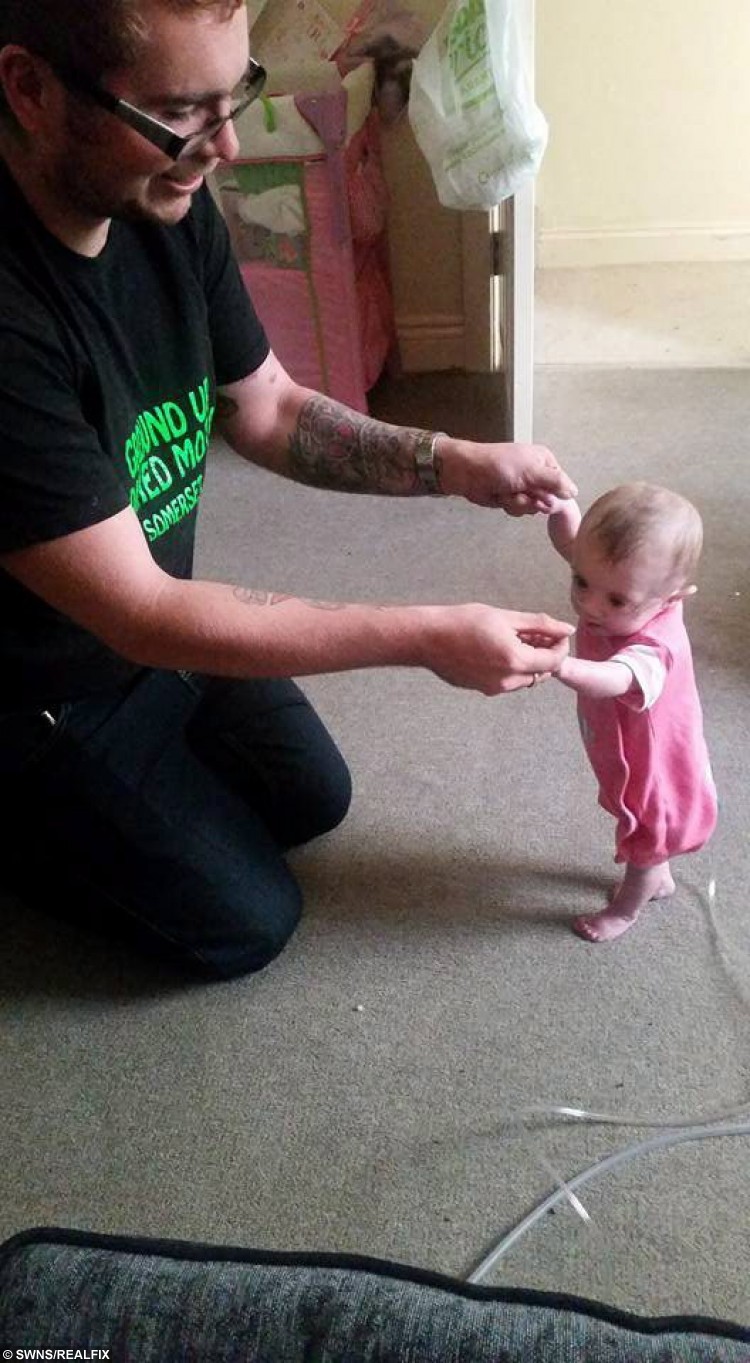 Kaci-Rose finally at home with her dad

Sadie said: “It was scary because she still had all of these machines hooked up to her. There were lots of different wires and tubes attached.

“She was on the ventilator for 11 weeks and I wasn’t able to hold her until after then.

“She also had to have laser eye surgery at about three months because her blood vessels weren’t developing properly.

“The whole six months we were in hospital with her there were so many ups and downs.”

Sadie and husband Marc, 27, a warehouse operative, were allowed to take Kaci-Rose home to Highbridge, Somerset, on July 1 when she weighed 6lbs 1oz.

She was still hooked up to a monitor to measure her heart rate and oxygen levels and even now relies on a tube to provide her with oxygen. 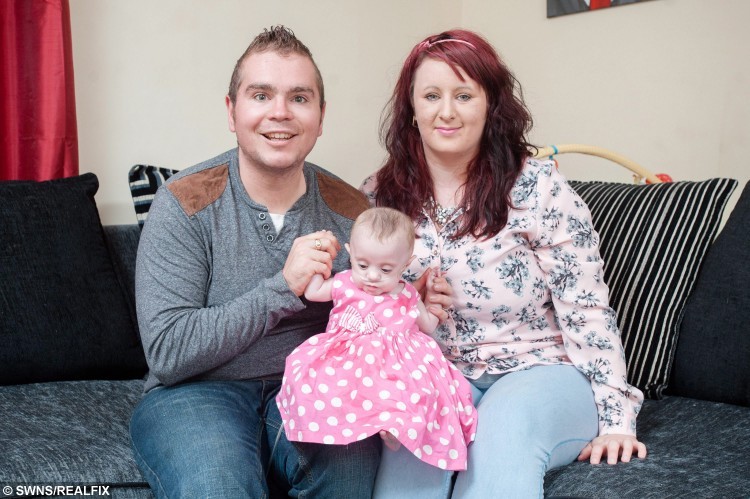 The family are back together

Sadie said: “She is eight months old now but has the development of a four month old. She weighs 8lbs 7oz and is about 56cm long now, so about the size of a newborn.

“We were told she will probably have cerebral palsy but it is too early to tell yet. We were also told she would be blind and deaf but she can hear and see some things.

“It has been very bumpy and emotional and it is still hard.

“We take each day as it comes but at the moment we are just enjoying spending time with her and doing absolutely everything we can to make sure she has a normal life.” 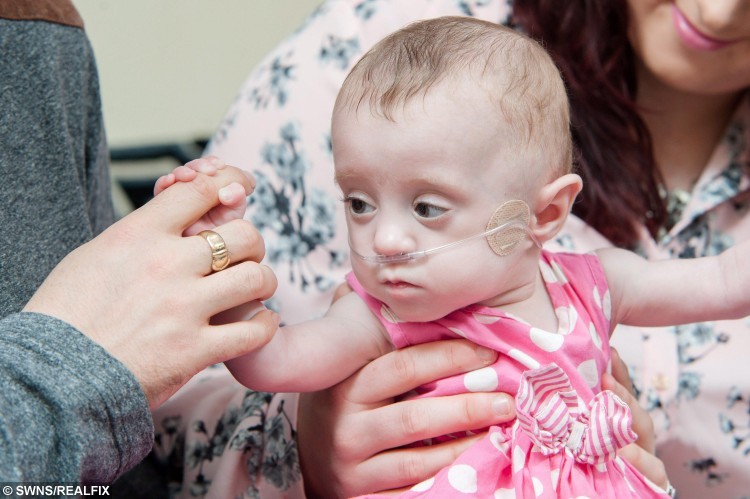 The miracle baby that was born four months before due date

Sadie and Marc are now keen to share their story with other parents to show the world that extremely premature babies can survive.

She said: “It was horrible seeing her have so many tubes and needles.

“She has had so many needles in her little body that we chose to put her through this so we could have her here today.

“I just want to say a big thank you to all the staff and also to other parents that are faced with decisions like this.

“As horrible as it is you must fight for your baby and let them have the chance. Kaci-Rose has proved that it can go well.” 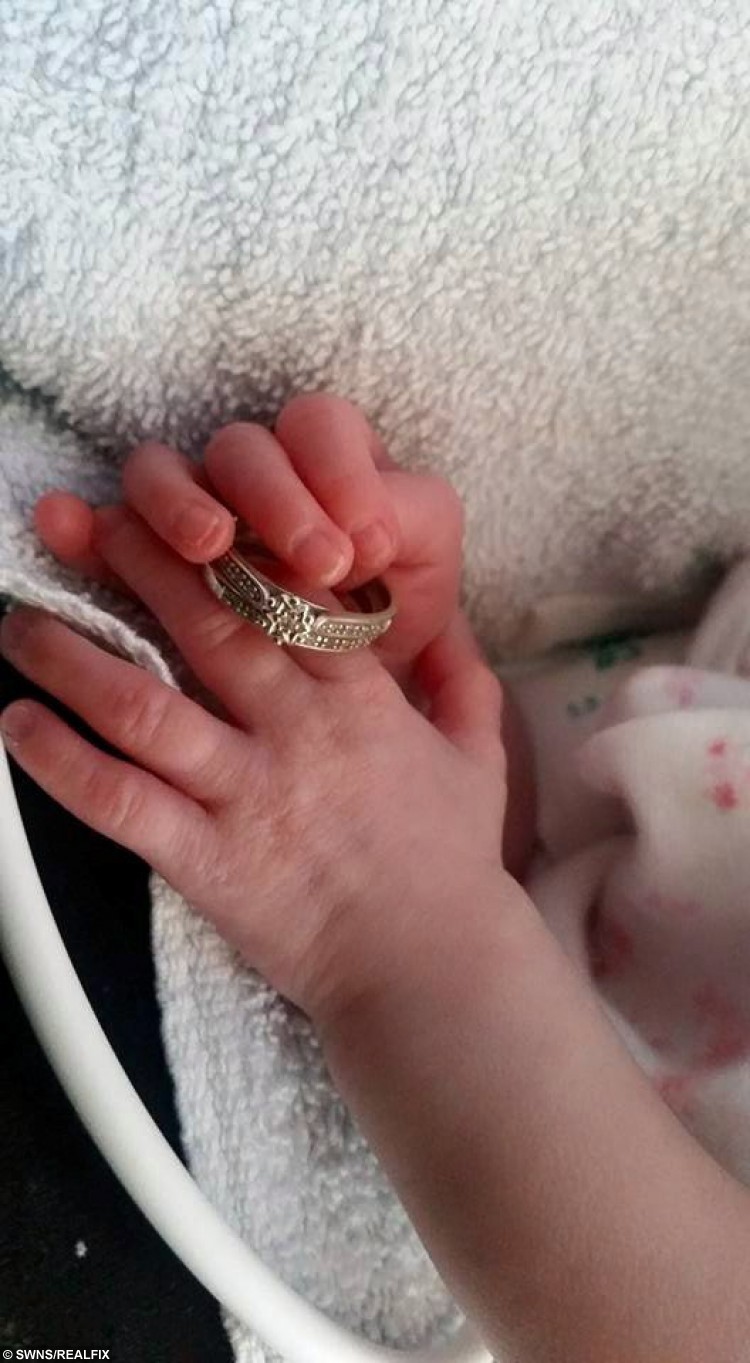 « Previous post Discover why these protesters stripped off and rode down local high street
Next article » This bite hospitalised a 3-year-old and the culprit could be lurking in YOUR home...