Collect. Esme Poulsom, days after she was born. Taken 28 Dec 2012 . See SWNS story SWHAND; Miracle mite Esme Poulsom has astounded medics by surviving despite being born four months premature weighing just 1lb 6oz - smaller than mother's hand. Tiny Esme was given just a one per cent chance of life when Kirsty Barrett's waters broke after just 19 weeks. But Kirsty, 24, and partner Gareth Poulsom refused to give up hope and Esme was born four months prematurely weighing just 1lb 6oz. She was so small Gareth's hand dwarfed her as she lay in neo-natal intensive care.

Tiny Esme was given just a one per cent chance of life when Kirsty Barrett’s waters broke after just 19 weeks.

But Kirsty, 24, and partner Gareth Poulsom refused to give up hope and Esme was born four months prematurely weighing just 1lb 6oz.

She was so small Gareth’s hand dwarfed her as she lay in neo-natal intensive care.

Esme was so fragile and Kirsty was so ill after the birth that she was not allowed to see her for two agonising days.

Doctors also warned the couple that the first weeks of her life were also ‘touch and go’ and she may not survive.

Against all the odds, Esme is now eight months old – although she is still battling lung and feeding complications because of her early birth.

Kirsty and Gareth, who also have a two year-old daughter Ava, are also preparing a formal complaint against health chiefs over the handling of her case.

They claim medics at one hospital ‘gave up’ on Esme even before she was born and have since failed to properly address her ongoing problems. 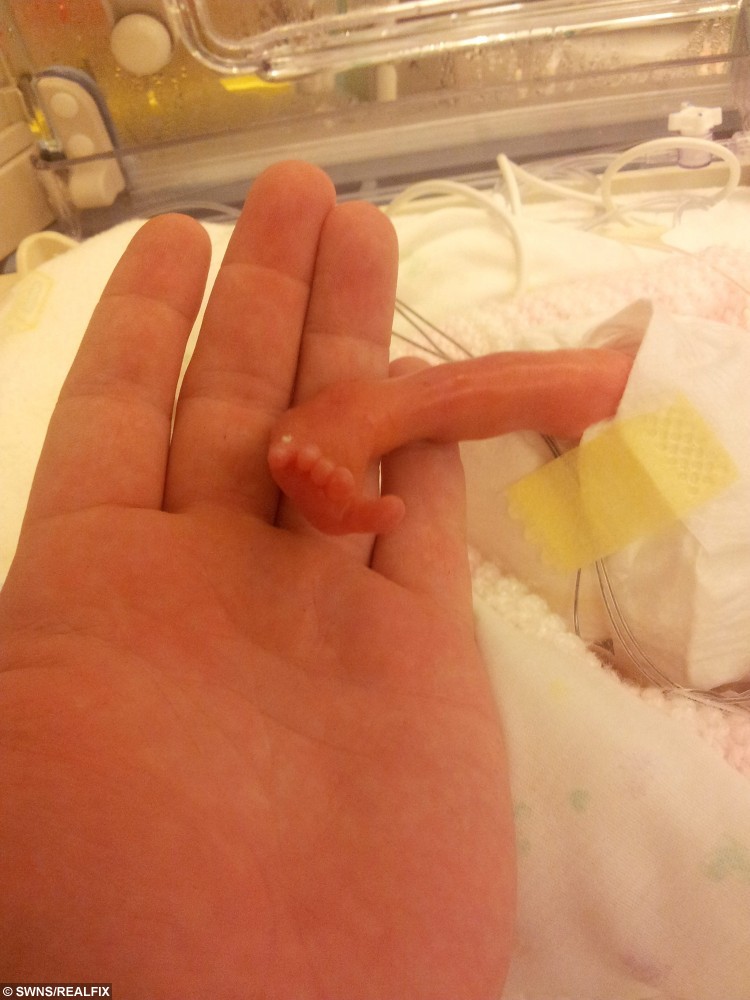 Four days later her waters broke and Kirsty said doctors at Nevill Hall Hospital in Abergavenny, Gwent told her she would either miscarry or give birth within 48 hours.

Neither happened and her labour calmed but doctors warned there was no chance of the baby surviving without waters and said the pregnancy would stop developing normally.

They recommended an abortion but Kirsty and Gareth refused and decided to let nature take its course. 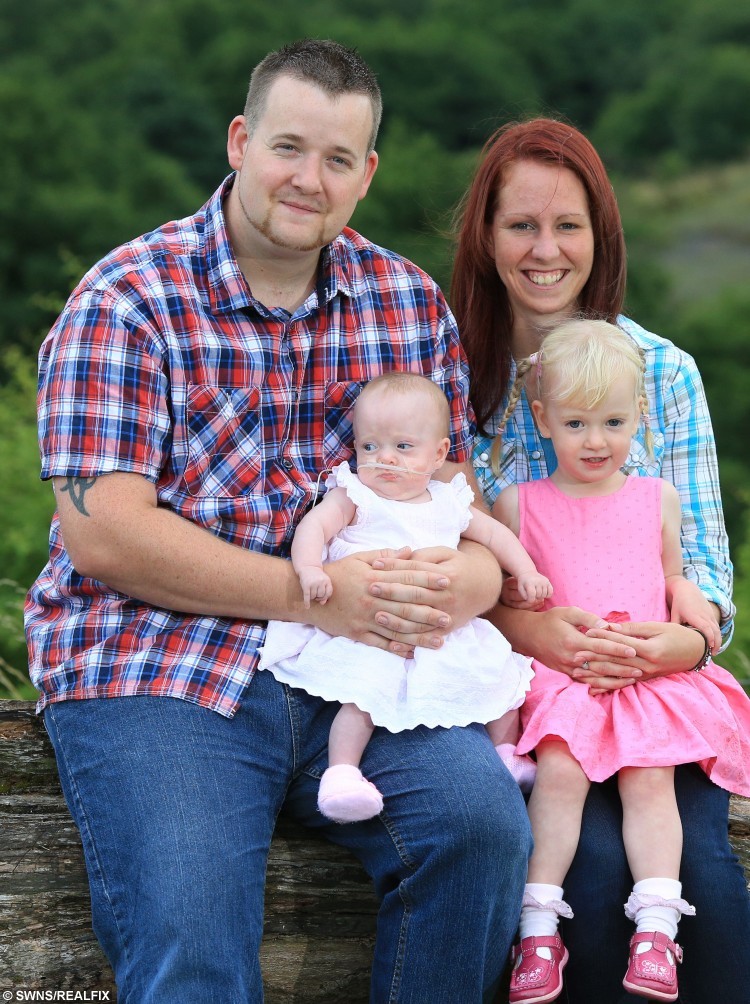 Two week after her waters broke – and still having periodic contractions – Kirsty was discharged and put herself on bed rest at home in Pontypool, Gwent.

She said: “I was told at Nevill Hall that if I got to 23 weeks I could have steroids to stop the contractions and help viability at around 24 weeks.

“But when I reached 23 weeks I was told they wouldn’t give me steroids because they felt I would miscarry.

Kirsty knew of someone at the Royal Gwent Hospital in nearby Newport who had been given steroids in a similar situation.

Gareth contacted them and a doctor agreed to take over Kirsty’s care if she could get transferred. 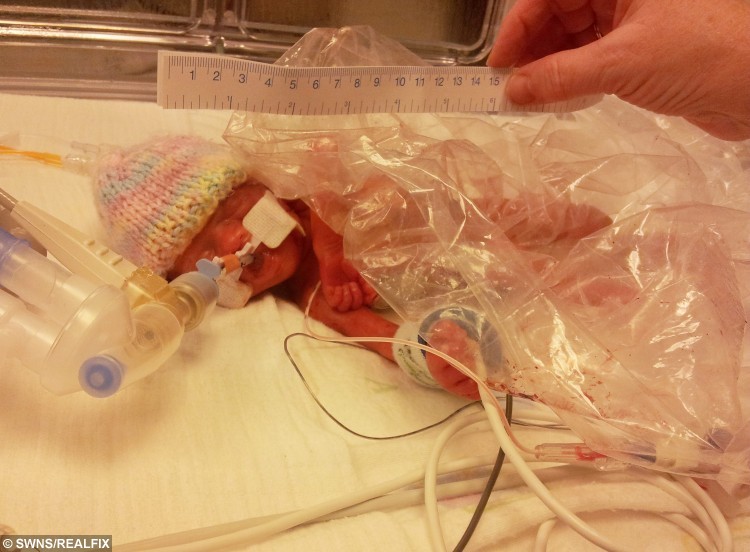 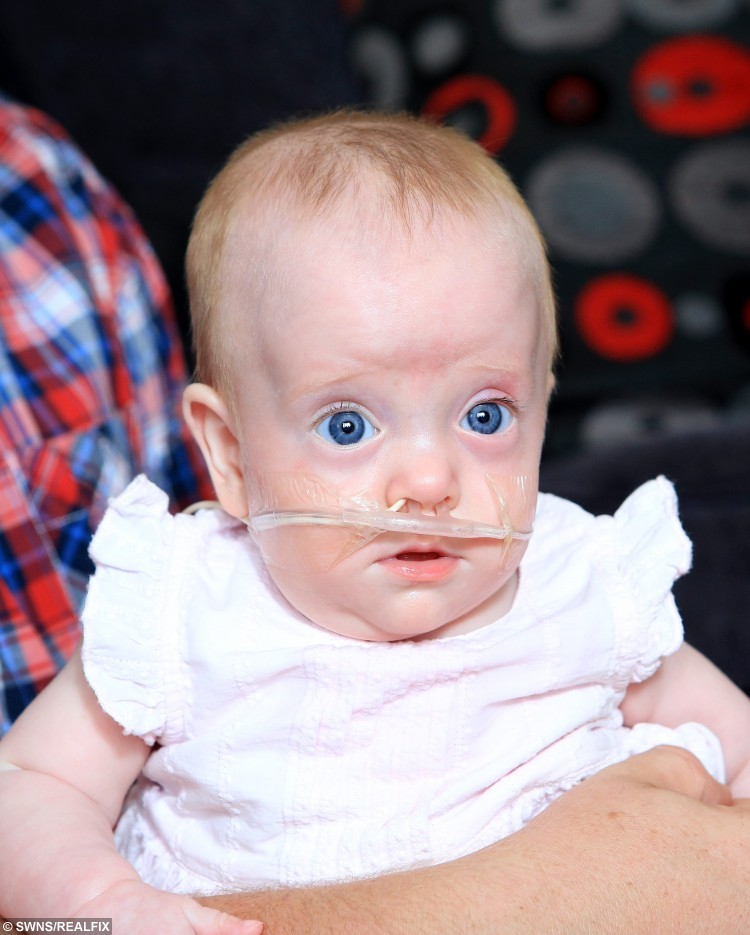 Nevill Hall initially refused to the transfer, saying Kirsty was in active labour but they relented after agreeing that the baby’s head was not engaged.

Within 20 minutes of getting there Kirsty was given a steroid injection.

She added: “Looking back, I can’t believe two hospitals in the same area could have such a different approach.”

A week later she developed blood poisoning and had to have a caesarian section and Esme was born on December 18 – four months ahead of her due date of April 7.

Kirsty recalled: “They didn’t think Esme would survive because she’d had no waters for five weeks. There was a one per cent chance.

“They thought they would give her to us and she would pass away. But she was born crying. They couldn’t believe it.

“She was so tiny and for the first couple of days Gareth brought me pictures because I couldn’t see her.

“It was touch and go and we were warned that sometimes there are two weeks or so when things seem to go well, but then they can go downhill. But she didn’t.”

Instead Esme kept improving, and after eight weeks was transferred back to Nevill Hall and put in the special care baby unit.

But it was then that the first problems emerged with her lungs which medics allegedly down-played. 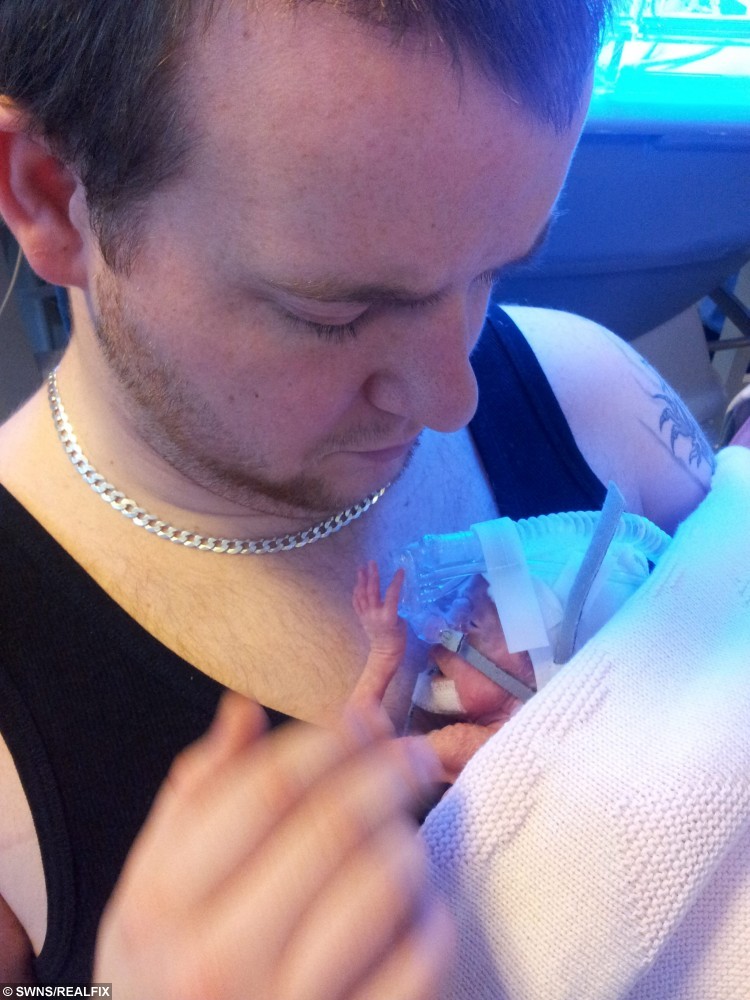 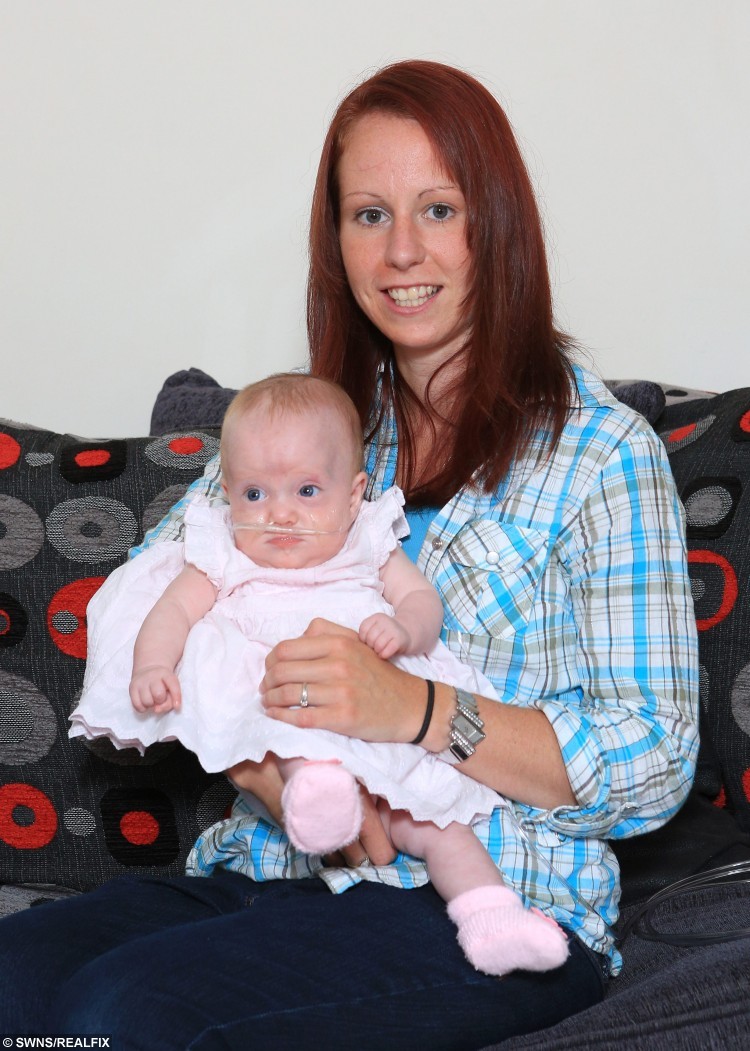 Esme began bottle feeding but Kirsty feared she was taking milk into her lungs.

Despite her concerns the hospital discharged her after 100 days – with her baby still choking and coughing while feeding.

Kirsty said: “She was getting worse. One day, going to Nevill Hall, she stopped breathing in the car. I had to resuscitate her.

“They told us it was bronchiolitis, that she’d caught a bug. She seemed to pick up on antibiotics. I said I was concerned again about aspiration, they said again it was a bug.”

Esme stopped breathing a second time and Gareth had to resuscitate her.

Kirsty again repeated her concerns about her taking milk into her lungs, but says she was again told the baby had an infection.

But Esme’s condition worsened and she was transferred to specialists at the University Hospital of Wales in Cardiff.

Kirsty said: “One of her lungs had collapsed. She was very poorly, and they prepared us for the worst.”

But once more Esme defied the odds and was returned home via Nevill Hall.

“A couple of weeks later we had a phone call from UHW asking how she was,” said Kirsty.

“We went down there and they were quite shocked at the state of her lung. It was still partly collapsed.

“They asked if I had any concerns and I said I thought she was aspirating – taking milk into her lungs. They tested her and stopped the bottle feeding straightaway.” 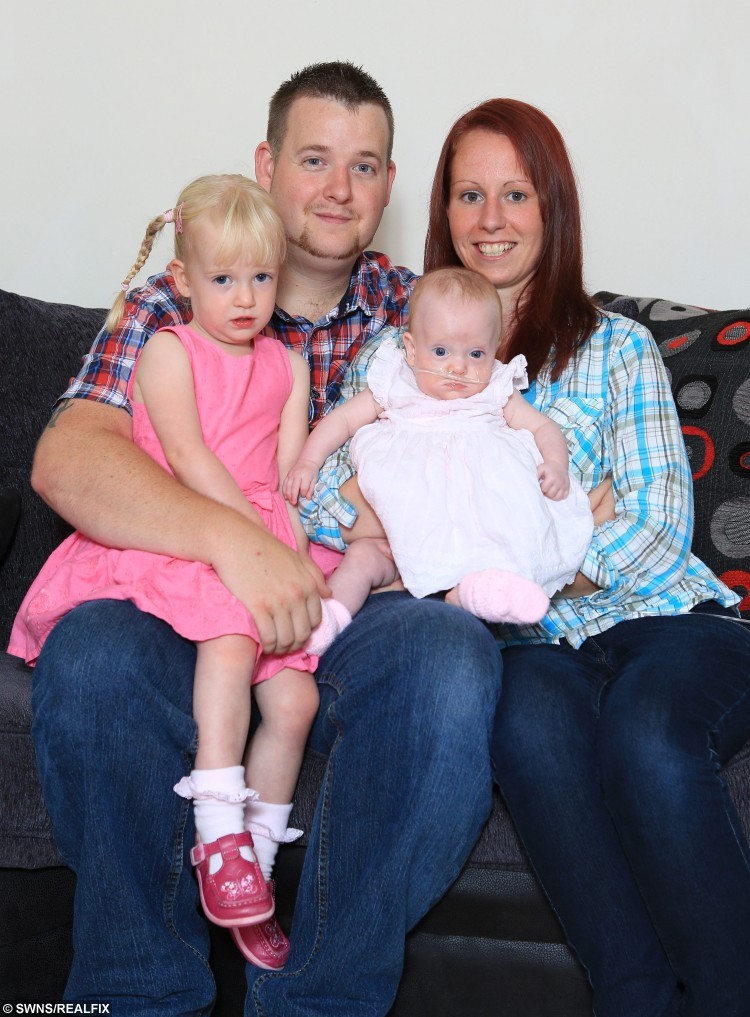 Esme was admitted and attempts were made to reinflate her lung.

That has been only partially successful and problems remain with her swallow which may require a feeding tube to be fitted into her stomach.

Kirsty said: “We don’t know if her lung will fully reflate.

“If my concerns had been listened to at the beginning, this could have been avoided.”

What would you think if you saw this eerie image on YOUR mobile phone?