‘They should know what they’ve done,’ says mum from hospital bed

Sally Edwards who was knocked off her bike and left in the road in a serious condition. See SWNS copy SWHITRUN. A mum left in intensive care after a hit-and-run has vowed to hunt down the careless driver who left her for dead - and give him a good talking to from her HOSPITAL BED. Mum-of-two Sally Edwards was left in agony with six broken ribs, a punctured lung and a broken collar bone after she was knocked off her bike by a careless driver who failed to stop.

A mum left in intensive care after a hit-and-run has vowed to hunt down the careless driver who left her for dead – and give him a good talking to from her HOSPITAL BED.

Mum-of-two Sally Edwards was left in agony with six broken ribs, a punctured lung and a broken collar bone after she was knocked off her bike by a careless driver who failed to stop.

The keen cyclist, 45, was on a ride with pals near Headley, Hants., when the oncoming car turned right across her path.

Sally, from Leatherhead, Surrey, ploughed into the side of the car and catapulted over – and retained consciousness for long enough to watch the motorist drive off.

She also suffered a broken scapula in the November 25 smash, which saw her spend the last fortnight in intensive care, where she is still recovering.

The housewife said: “The car was coming up the hill and then suddenly turned right in front of me. It was just incredible.

“It hit me and I went into the rear passenger side. The driver would have absolutely felt me.”

“My friend behind me had to swerve as well so if it hadn’t have hit me it would have hit her.

“Apparently I flew right over the car and landed on the other side. I ended up on my knees.

“I was conscious throughout but I wasn’t really aware of what was happening to me. 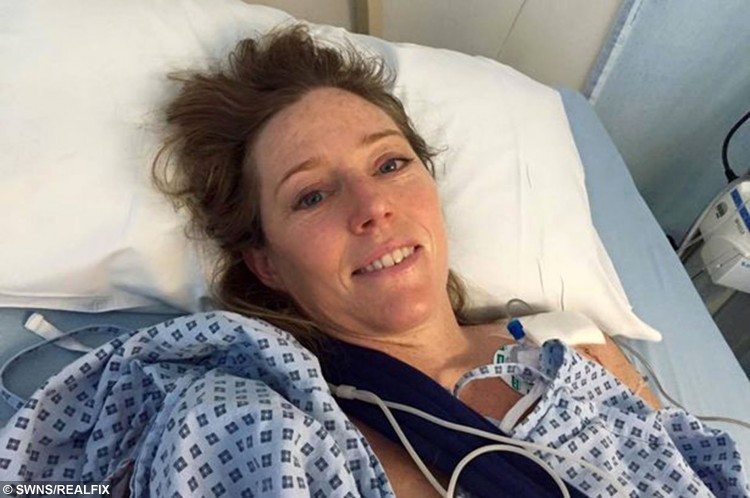 “I was just trying to concentrate on breathing. I tried to go into a Zen-like state.

“My fear was that I had internal injuries.

“Gradually I became aware and I realised that he was accelerating away. I was shocked.

“I just couldn’t believe it.”

Sally was rushed taken to St Helier hospital in Sutton before being transferred to the major trauma unit at St George’s in Tooting, south west London.

She now wants to talk to the driver who left her lying in the road.

She said: “The thing that has been on my mind is: ‘Are they just anti-cyclist?’

“There are a lot of drivers out there who are just angry when it comes to cyclists.

“They act like we don’t know the rules of the road but we are all drivers as well as cyclists.

“I want to be able to talk to the driver who hit me. I think they ought to know what they’ve done.”

“You should never leave someone.”

From her hospital bed, Sally has also launched a social media campaign for anyone who might know the driver to come forward.

The accident happened near Headley Court military hospital and Mrs Edwards said she hopes CCTV footage of what happened will emerge.

Sally, who had been preparing to move to San Jose in California with her husband Nigel, an IT sales director, said they have now had to put everything on hold while she recovers.

Surrey Police are still looking for the driver of an old blue 4×4 with possible damage to the rear side and are appealing for witnesses.