A disabled seven-year-old girl who can barely walk unaided has raised £7,000 for charity by completing a 10 mile challenge – after being inspired by Captain Tom Moore.

Inspirational Emily Caffrey, who has Cerebral Palsy and a brain malformation, completed her challenge on her seventh birthday on Saturday using her crocodile walker.

Her proud parents – Jon, 45, and Hannah, 40 – said Emily – who had previously never walked more than half a mile – was motivated by seeing Captain Tom on TV.

Jon, a former RAF police sergeant, said the youngster recognised his war medals and made the connection with her father’s uniform.

She also wanted to follow in Captain Tom’s footsteps as he completed 100 laps of his garden using a walker similar to the one Emily relies on. 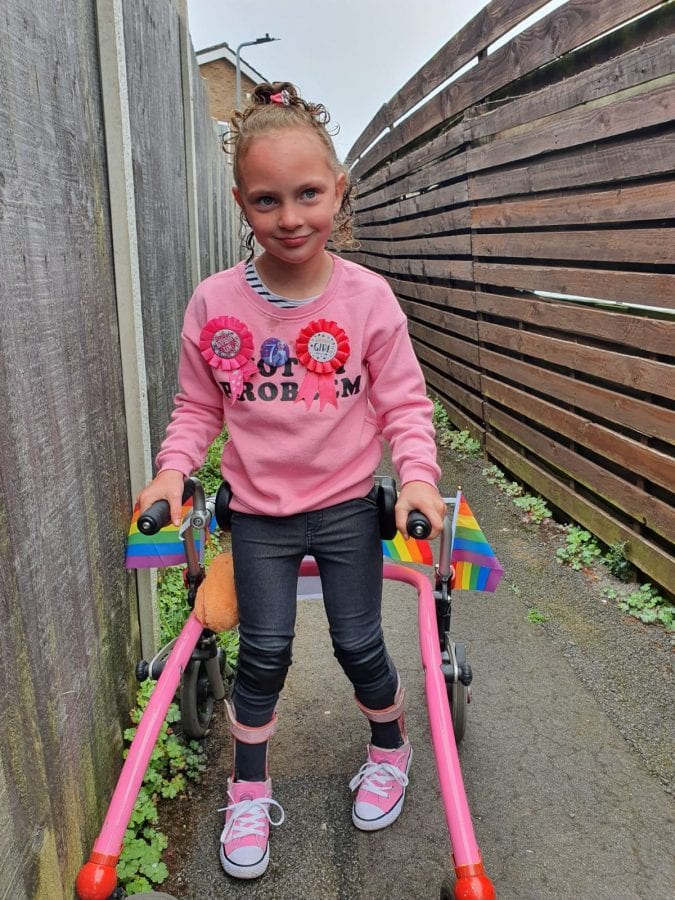 Jon said: “She saw Captain Tom doing his last lap, she saw his medals and she made the connection because she has seen my medals.

“Her mum explained what he was doing and she said ‘I can do that mummy’.

“So we came up with the suitable target of ten miles in a week.

“Before this, she’d only ever walked half a mile at most.

Emily has been using her daily exercise during lockdown to go for walks over the past month.

But she challenged herself to complete 10 miles in a week – and smashed her target on her seventh birthday having walked over 11 miles. 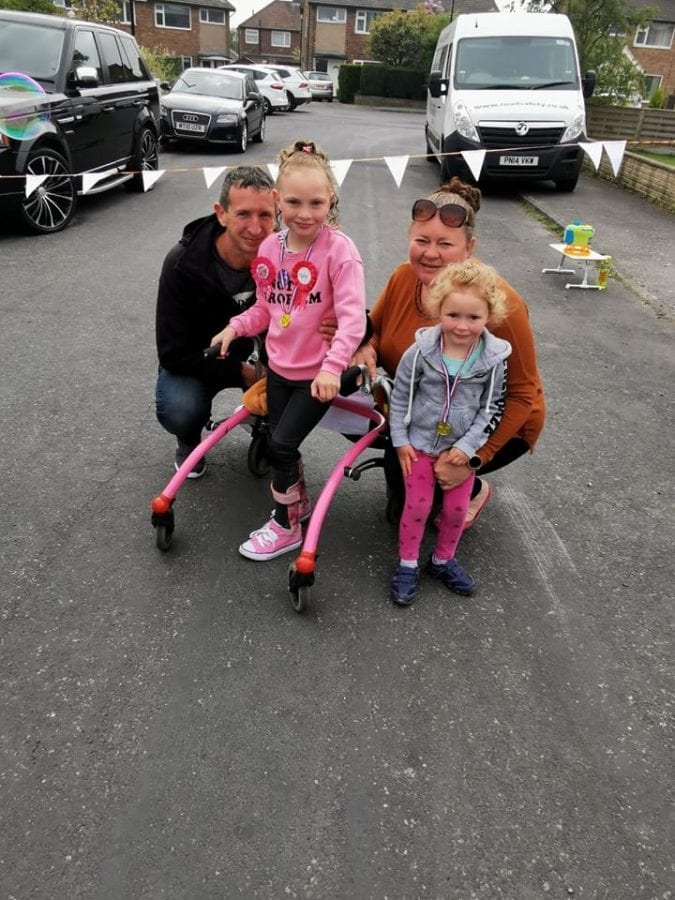 Jon, who is now working as a delivery driver for a supermarket, added: “She can’t walk unaided for more than a few metres.

“Her school do a Wednesday walk that is a mile long. Emily has never done it, has always done it in her wheelchair.

“She had been going out for walks with us during her daily exercise, but had never gone as far as she had the last week.

“She has walked an average of a mile and half each day, which is incredible for her.”

While she attends mainstream school, it has caused her developmental issues and she has spent a lot of time in hospital during her young life.

Jon added: “She understands what she was doing it for.

“Doctors and nurses are her heroes, she spent a lot of time in hospital from the day she was born.

“She knows they do an amazing thing and she knows that she is raising money to help them.”

Emily has raised more than £7,000 so far for the NHS Charities Together fund.

Jon said the family has been overwhelmed with the support Emily has received, which has seen neighbours waving as she sets off for her walk and even drivers stopping their to donate money.

He added: “We went out on Wednesday, for example, and we got £60 on the walk.

“We’ve had cars driving past, turn round and donate cash.

“Neighbours on our street have been giving her a little clap when sets off which has really spurred her on.” 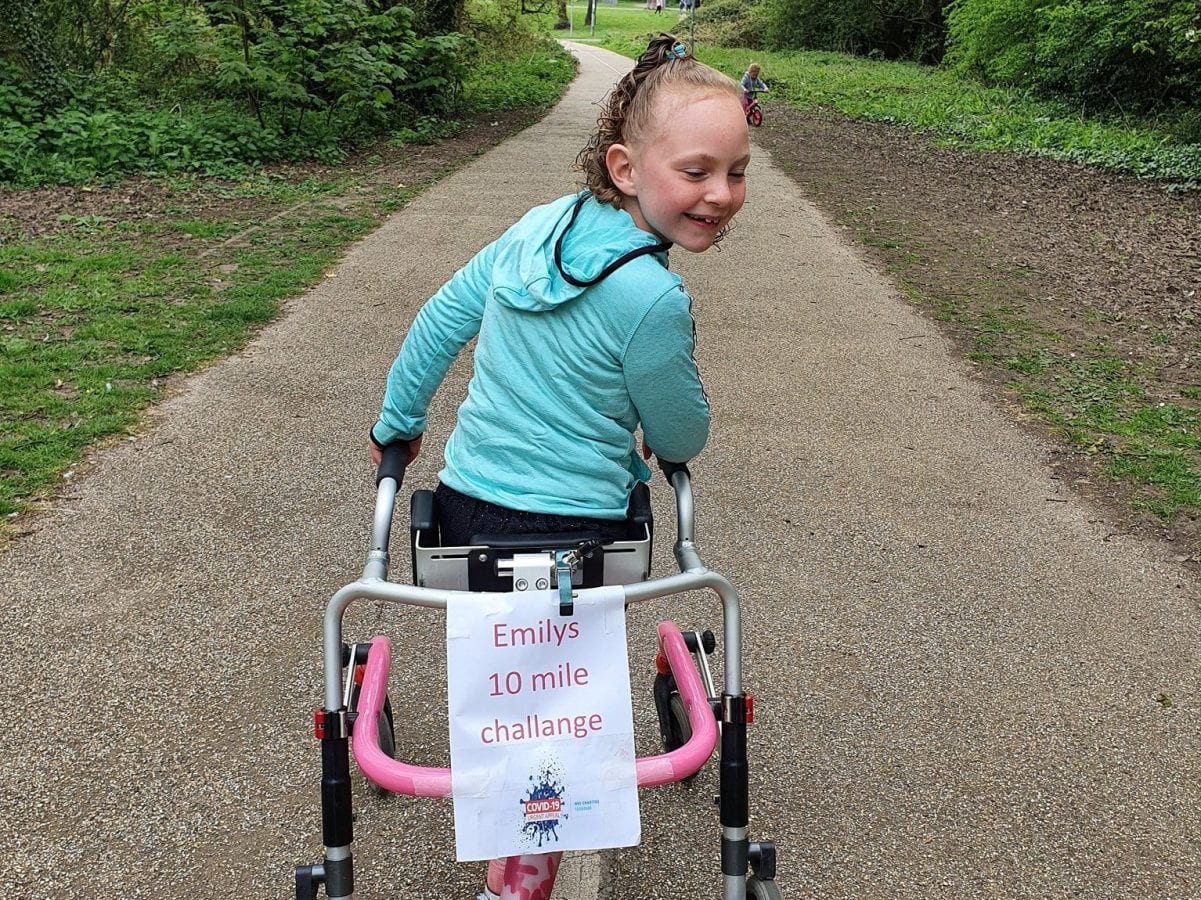 And on Saturday, neighbours turned out to applaud Emily over the finishing line – in a moment captured by a heart-warming video.

“Because of what we’ve been through with Emily, it reduces me to tears.

“This challenge just sums her up.

“She’s so willing to help other people, even if they’re more able than her.”

Little Emily captured the nation’s hearts three years ago when a video of her reaction to seeing her dad for the first time in months went viral.

She could be heard yelling “daddy” as she ran towards him before Jon pulled her up into a bear hug on his return from Afghanistan.

Jon said spending more time at home with his family, including Emily’s younger sister Molly, 3, played a part in his decision to leave the RAF.

He added: “There is probably only Emily who can reduce me to tears and I just can’t put into words how proud I am of her for doing this.

“She has come on so much since she was diagnosed with a brain malformation three years ago.”

Emily said it was “crazy to see so many people” come out and support her.

This is what a makeshift maternity shoot looks like under lockdown…

This is what a makeshift maternity shoot looks like under lockdown...