Euan and James at Route 66 start. See Ross Parry copy RPYROUTE: Three friends are lucky to be alive after a truck ploughed into them at 65mph as they cycled the world-renowned Route 66 highway. Ewan Stott, Will Corran and James Watkins, all 23, were left with life-changing injuries after being thrown from their three-person tandem bike during the 2,448 mile charity feat from Chicago to Los Angeles. They spent ten months training for the gruelling challenge, and their friendship was tested to the limit as they geared up to become the first threesome to ever complete it on one bike. But after getting 650 miles under their belts, their dream of getting to the finish line was left in tatters when a Chevrolet pick-up truck careered into them, sending them all flying.

Three friends are lucky to be alive after a truck ploughed into them at 65mph as they cycled the world-renowned Route 66 highway.

Ewan Stott, Will Corran and James Watkins, all 23, were left with life-changing injuries after being thrown from their three-person tandem bike during the 2,448 mile charity feat from Chicago to Los Angeles.

But after getting 650 miles under their belts, their dream of getting to the finish line was left in tatters when a Chevrolet pick-up truck careered into them, sending them all flying.

Student Ewan, who was at the back of the bike, said: “I was thrown from the bike and hit my head of the road.

“My helmet cracked open and I fell unconscious pretty much straight away, the next thing I remember was waking up in hospital.

“We were lucky that we were all thrown off to the side of the road, rather than into the middle where we might have been hit by the truck again.

“There’s no doubt that the trailer pinned to the back of the bike acted as a barrier, without it all three of us would have felt the direct impact.

“We are very lucky because it saved our lives.”

A passer-by called an ambulance and the trio were taken to hospital in Joplin, Missouri, where between them they were all found to have a selection of serious injuries.

Middle-man James broke his back, and suffered from a punctured lung and road rash.

Ewan had 3 scalp lacerations which involved 20 staples, a punctured lung, ruptured liver and spleen, fractured elbow vertebrae and extensive road rash to both knees and elbows.

Will, who was in the front seat, suffered from a fractured vertebrae and some road rash.

James said: “Shock was the first thought that came to mind. The day’s ride was just like any other day and the last thing we expected that evening was to be hit by a truck.

“It took us a while to come to terms with what had happened and looking back now it’s a blur.

“But to have our dreams taken away in a split second is very emotional for us. It’s hard to put it into words and unless you organise, train for, fundraise and undertake a journey such as ours, you will never quite realise how hard it is.”

The childhood friends, from Wrexham, North Wales, decided to brave the mammoth challenge in 40-degree Arizona heat after both James and Will’s mothers were diagnosed with cancer.

They hoped to raise money for Cancer Research UK, Cheshire Young Carers and The Mark Evison Foundation – a charity which helps support teenagers who are required to take care of older family members.

Prior to leaving for America in August, they mastered a tiring training programme which included 100-mile weekend runs and 70-mile bike rides after work, in order to get them fit enough for the 35-day stint.

Will said: “We wanted to push ourselves to the limit both physically and mentally to raise as much money as possible. It was about getting out of our comfort zone.

“The route entailed cycling from Chicago to Los Angeles, crossing three time zones while riding a three-person triplet tandem bike, unsupported through some of the harshest landscapes in the world.

“Our start was delayed after I broke my back in a snowboarding accident back in April, but I was determined to get back in the saddle and finish what we started.”

They chose not to take a support vehicle and instead ride Route 66 on a solo bike, taking advice from others who had previously completed the course.

Ewan said: “The main reason for this was to raise as much money as possible for our three chosen charities and keep our costs down to a minimum so we could focus our time on fundraising rather than saving for the expedition itself.

“We had carried out significant amount of research and sought advice from healthcare professionals to ensure we had our nutrition and hydration knowledge up to scratch before we encountered the brutal heat in the desert.

“However, as we progressed in the trip, everyday threw up a new obstacle for us, from punctures to our back wheel losing 5 spokes.

After all these setbacks, as a group we battled on past the quarter mark and it was on day nine that we were hit by the truck travelling at 65mph.”

A police investigation concluded the collision was an accident after the sun got into the driver’s eyes as it was setting, and no charges were brought against him.

Will said: “My initial reaction was that I didn’t even want to look at him apart from to scream at him to call an ambulance whilst lying in agony on the side of the road.

“Obviously we are devastated not to finish what we started, and naturally we were angry with him for not being more cautious.

“However it seems like a genuine accident that could have happened to anyone – so we don’t feel personal ill will towards the driver.”

The cyclists were hospitalised for two weeks following the crash as they underwent surgery for their injuries.

They were overwhelmed by the support they received from medics and local people, who provided them with clothes and places to stay until they were fit enough to return home.

“We are all very humbled by everyone’s support,” said James. “It’s fantastic to see people still donating and we cannot thank people enough for their generosity.

“We all had incredible support from our friends and family at home, and also from the Joplin community.

“The ER doctor who looked after us the first night even let us stay in his home which was extremely kind of him.

“We are extremely thankful to everyone who helped us.”

Astonishingly, despite the near-miss, Ewan, Will and James plan to complete the Route 66 challenge in the future.

Will said: “It’s definitely something we want to finish. However a challenge like this requires great sacrifice through training, planning and time off work so it’s unclear when we’ll find the time to do it.

“Sourcing a three-man tandem was hard enough before-hand, so that makes things more difficult too.”

They are all still undergoing physiotherapy for their injuries to get the movement back in their limbs, while Will will be scarred for life down his arms and back.

Ewan added: “The whole experience has taken a great deal out of us both mentally and physically, so we’re cautious about embarking on another challenge at the moment.

“It may sound like a cliché but the whole challenge has been a rollercoaster of extreme highs and lows that we could never have anticipated.

“We have learnt a great deal about ourselves individually and our resolve as a team in the face of adversity.

“We’ll forever be grateful to the people of Joplin, USA, who took care of us in what could have been a very dark time for us all in a foreign country.

“Our priorities now lie in getting back to work so we can kick-start out careers.” 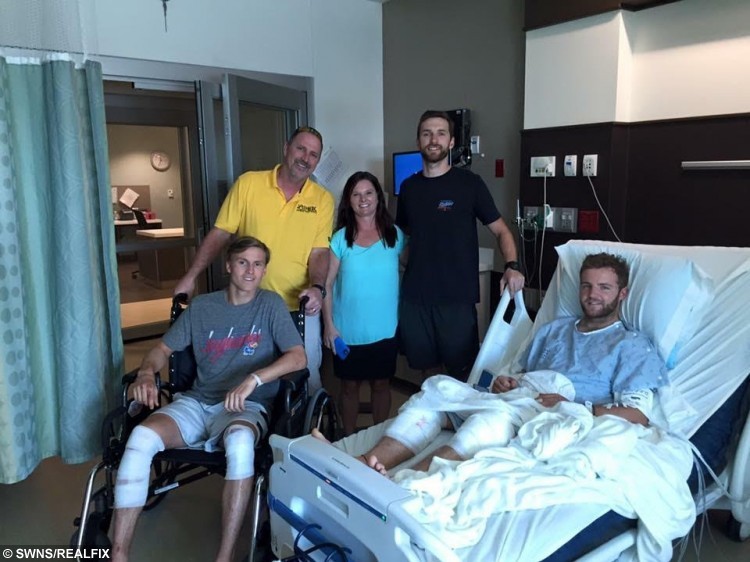 When a student put her shoes up for sale she didn’t expect this at all!