Connie Rose Seabourne, aged 2, who was diagnosed with Down's Syndrome at her home in Morley, Leeds, West Yorkshire, on 3 September 2015. Pictured with her mum Julie Britton. See Ross Parry copy RPYMODEL : An adorable toddler with a special smile is aiming to be Britain's next TOT model after being snapped up by a casting agency. Little Connie-Rose Seabourne, who turns two in October and has been described as "very cheeky" by her mum, wows people everywhere she goes with her wide eyes and happy face. Mum Julie Britton is incredibly proud of her beautiful daughter who is being put forward for commercial adverts in major shops and TV work. Connie-Rose was born two months premature but wasn't diagnosed with Down's Syndrome until she was two weeks old - something that didn't faze Julie, 42, or her partner Peter Seabourne, 44, at all.

This adorable toddler with Down’s Syndrome is aiming to be Britain’s next TOT model after being snapped up by a casting agency.

Little Connie-Rose Seabourne, who turns two in October and has been described as “very cheeky” by her mum, wows people everywhere she goes with her smiling face.

Mum Julie Britton is incredibly proud of her beautiful daughter who is being put forward for commercial adverts in major shops and TV work.

Connie-Rose was born two months premature but wasn’t diagnosed with Down’s Syndrome until she was two weeks old – something that didn’t faze Julie, 42, or her partner Peter Seabourne, 44, at all.

Julie said: “I was assessed as being at higher risk of having a baby with Down’s Syndrome when I was pregnant and could have had the diagnostic test to find out but I didn’t want it because it just wasn’t an issue.

“We weren’t bothered at all. We have friends whose children have been diagnosed with Down’s Syndrome and have had nothing but positive experiences of children with the diagnosis.

“There’s so much support out there – it isn’t a problem. It’s just another little baby who needs to be loved.”

After being told by everyone she meets that Connie-Rose should be a model, Julie, from Morley, near Leeds, West Yorks., finally decided to ask an expert to see if it was really possible.

She said: “I sent an email with a picture of Connie-Rose to a model agency to ask them if they were interested or whether I was just fooling myself.

“We got a response back straight away to say they were definitely interested.

“When I spoke to the agencies about her Down’s Syndrome diagnosis, no one even batted an eyelid. I think I was more bothered about it than anyone else and it definitely doesn’t bother me!”

Julie sent out pictures of Connie-Rose to three agencies who then contacted her to arrange test shoots to assess how Connie-Rose would perform in front of the cameras.

Julie said: “She absolutely loved it. She follows direction very well and she has so much fun in front of the cameras.

“She’s already been given two contracts but we can’t say what for. She’s had so many photographs of her taken by me that she’s just used to it!”

However, if Connie-Rose decided to give it all up, Julie wouldn’t hesitate.

She said: “As soon as it gets too much for her or she doesn’t like it, we’ll stop. The first sign that she’s not enjoying it, we’ll stop. What she wants to do is the most important thing in all of this.”

Speaking about people’s perception of Down’s Syndrome, Julie is very positive about the experiences she and Connie-Rose have had.

She said: “We’ve had so much support from so many people and so many positive experiences.

“I do think people could perhaps be a little more educated about what wording to use. Connie-Rose’s disability does not define who she is.

Julie now visits other parents whose children have Down’s Syndrome on local hospital wards to try to help families that at first feel overwhelmed with the diagnosis.

She said: “Some parents struggle with the idea of Down’s Syndrome initially and think that life isn’t going to be the same again. I try to explain just how much support there is out there for them.

“The inclusiveness and equality that my family has experienced has been amazing. It’s absolutely fantastic that Connie-Rose will be in the public eye – it’s just so positive.” 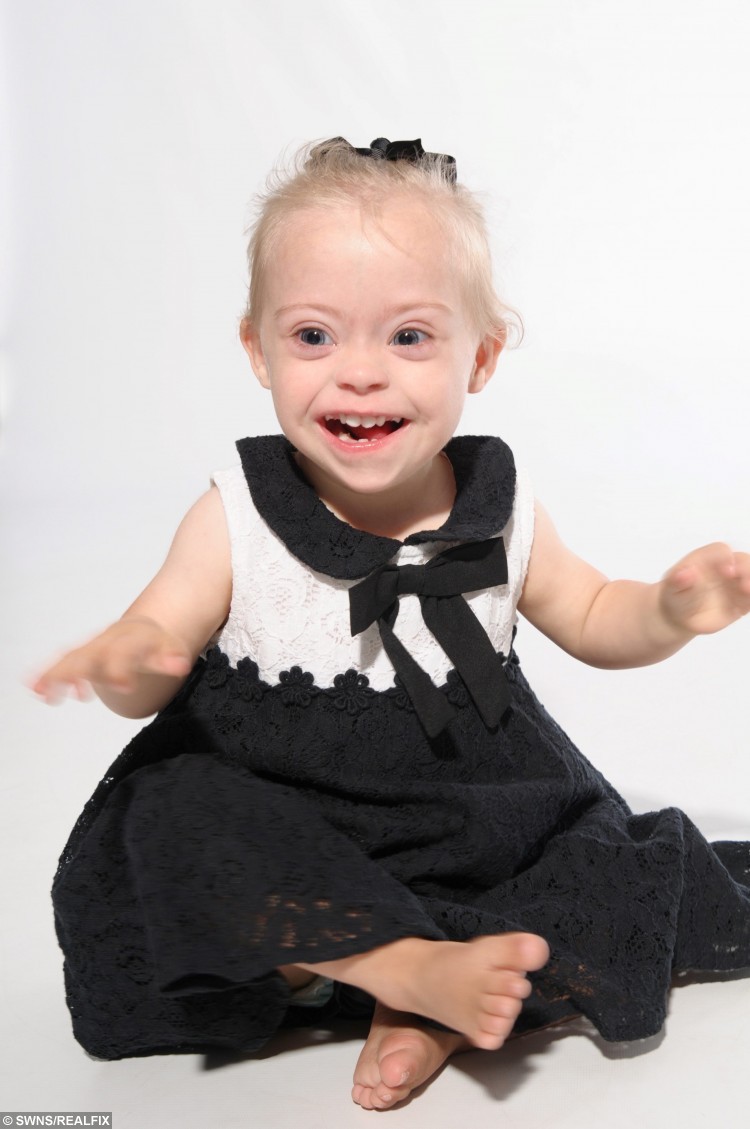