The wedding of David OÃSullivan (40th Commando Royal Marines) and Tracey Mountford at Hanley Registry Office, Stoke-On-Trent. The wedding was three days before David left to reach his barracks before a six-month stint in Afghanistan. The parents of a 'hero' Royal Marine Commando who died of a drugs overdose are calling on military chiefs to provide more support for soldiers suffering from post traumatic stress disorder. See NTI story NTIMARINE. Twenty-five-year-old Marine David O'Sullivan turned to heroin after struggling with the horrors he experienced on a six-month tour of Afghanistan Ã including witnessing the deaths of two comrades. An inquest into his death heard over the next two years he would suffer from a short temper, lack of sleep and recurring nightmares where he would wake up 'smelling blood'. Marine David, of Abbey Hulton, was finally formally diagnosed with PTSD just three days before he took a fatal dose of heroin while on leave. Now coroner Ian Smith has criticised the Royal Navy for a 'number of failings' which meant David did not receive the medical support he desperately needed Ã and his devastated family now want more help for service personnel.

A coroner has blasted military chiefs for “failing” a Royal Marine Commando who died of a drugs overdose – after his post-traumatic stress disorder was missed for TWO years.

Tragic David O’Sullivan, 25, was diagnosed with PTSD just three days before he collapsed and died while on leave in 2012.

An inquest heard he turned to drugs shortly after returning from a six-month tour of Afghanistan.

He witnessed four near-death experiences in Afghanistan, including thinking he had lost his legs when he was covered in another soldier’s blood.

He also held a dying comrade in his arms after seeing his pal shot by Taliban forces as he climbed a ladder.

David returned from the six-month tour in 2010 “a changed man” and became gripped by dark moods and became argumentative.

For the next two years David displayed tell-tale signs of PTSD, including having a short temper and suffering recurring nightmares where he would wake up “smelling blood”.

The inquest heard “bright and outgoing” David turned to drugs as a way of coping with his mental trauma which was not diagnosed until three days before he died.

He was found unconscious after taking heroin at his best friend James Diskin’s house in Abbey Hulton, Stoke-on-Trent, Staffs., while on leave on October 29, 2012.

He was rushed to Royal Stoke University Hospital but was left brain dead and his family made the heartbreaking decision to switch off his life support machine just hours later.

On Wednesday 21 October a coroner criticised the Royal Navy for a “number of failings” which meant David wasn’t diagnosed with PTSD for two years.

Ian Smith, Senior Coroner for Stoke-on-Trent and North Staffordshire, said: “I am satisfied on the balance of probabilities that had David received the treatment identified the outcome would have been very different.

“There were a number of failings but they have been acknowledged which hopefully will mean nobody else will suffer David’s fate and that those in the military who do suffer from PTSD will receive appropriate and timely treatment.

“David was a fine young man who suffered emotionally from what he experienced in Afghanistan.

“He was not killed by the Taliban but ironically the drug which is produced there.”

“The treatment David should have had never took place even though the treatment plan had been identified several months previously.

“Nobody knew of his escalating drug problem until October. He had managed to avoid being drug tested.

“Ironically it was a heroin-free period during his admission to Edith Cavell NHS unit which lowered his tolerance and allowed the subsequent heroin ingestion to have fatal consequences.

“He had not taken heroin until after he had served in Afghanistan and begun to feel the effects of PTSD, probably not until 2012, and then to try to mask his feelings and emotions.”

Mr Smith concluded David died from a “drug-related death on a background of PTSD after military service and for which due to a number of failings he did not receive treatment”.

Stoke-on-Trent Coroners Court heard David, from Abbey Hulton, joined the Navy in 2007 before qualifying as a Royal Marine in 2008.

He married his wife Tracey in March 2010 – just days before he was posted to Sangin in Helmand province.

He was then deployed on a six-month tour of Afghanistan in 2010 which the coroner described as a “pivotal experience”.

The three-day inquest heard David’s care plan was “fractured and ineffective” and he was only diagnosed with PTSD days before his death despite displaying symptoms shortly after returning from Afghanistan.

The hearing also found he did not have access to a consultant psychiatrist while he was suffering from mental health problems and there was also a “poor recording of outcomes” which led to delays between doctor’s appointments. 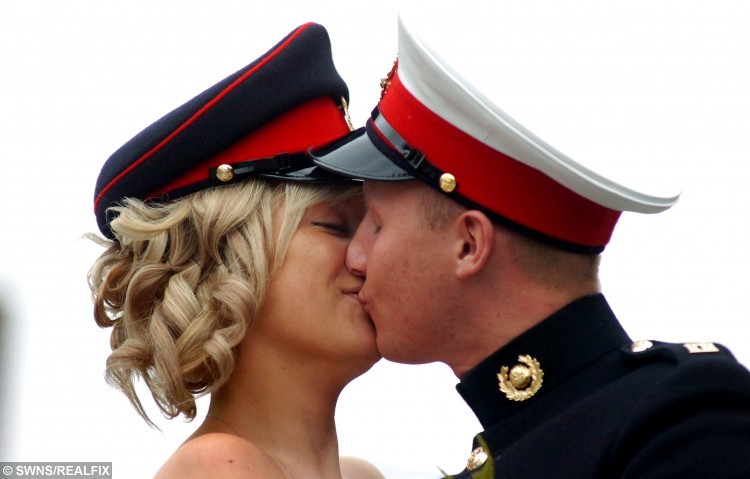 Surgeon Commander Rik Coetzee, head of psychiatry for the Royal Navy, admitted there was a “breakdown in communication” and “poor record keeping throughout”.

He told the inquest David’s death was a “catalyst” and said major changes had been made in response to the review he had carried out which found there were insufficient staff and resources to deal with him.

Surgeon Commander Coetzee added: “It was a difficult system David was put into.

“It is like a fire that creates a lot of smoke and people get so blinded by the smoke that they don’t see the fire.

“What David achieved with the heroin was to wave the smoke away from the fire but the smoke was still there.”

“He became reliant on a painkiller.”

The inquest heard David had been using heroin for five months before his death but it wasn’t detected by professionals until he was admitted to the Edith Cavell Unit in Cambridgeshire just 12 days before his death.

Giving evidence, his widow Tracey, who is a Corporal in the Army, said: “Before Afghanistan, David was happy-go-lucky, he was the life and the soul of the party.

“After Afghanistan, he was short-tempered and snappy. He would wake up in the middle of the night screaming.

“David was very proud of his job, of what he did, he would always talk about it.

“It was never easy living with someone with PTSD, but we had some good times.”

David’s family have now blasted the Navy for not giving the “brave and respected” dad-of-two the help he deserved.

His parents John and Kathleen O’Sullivan, who live in Abbey Hulton, have called on military chiefs to provide more support for soldiers suffering from PTSD.

Dad John, 58, said: “He was a brave and respected Royal Marine and he loved being a Royal Marine.

“We are in agreement with what the coroner has said. We feel he didn’t get the help he deserved with PTSD.

“If he had received the treatment he would not have turned to drugs, he was not that kind of young man.

“The people who cared for him tried their best but the system let him down.”

Mum Kathleen, 49, added: “David was a hero to our family. He was a nice, kind, young man. He was a true gentleman and loved being a Royal Marine.

“We feel he didn’t get the help he deserved with PTSD.

“We are assured the system has now been changed and procedures put in place so no other serviceman has to suffer in the same way.”

After the hearing, his widow Tracey, who lives in Bucknall, Stoke-on-Trent, added: “David was a loving husband.

“We just don’t want anyone else to go through what we did.”

A spokesman added: “Our thoughts remain with the family of Marine David O’Sullivan at this very difficult time.

“There were a number of shortcomings identified in the initial care provided to Marine O’Sullivan, which have since been addressed.

“The coroner was content that the changes required have now been made.”

‘She was screaming in pain’ Horrific injuries caused by curry sauce