by RealFix
in Bizarre, Health, Must Read, Relationships
0

The bride and groom even squeezed in a quick exercise session on their big day before heading to the Zumba room for the reception.

Daniel, 33, a mechanic, and Andi, 36, a student, once battled a $200 a day crystal meth addiction and credit exercise with helping them turn their lives around.

They have now been clean for almost two years.

The couple, who share a son, Liam, four, leapt at the opportunity to celebrate their big day in the gym where they work out six times a week together.

Andi said: “It’s been a home away from home for us and it has helped us maintain our sobriety.

“It is a good way to release your energy and stress. 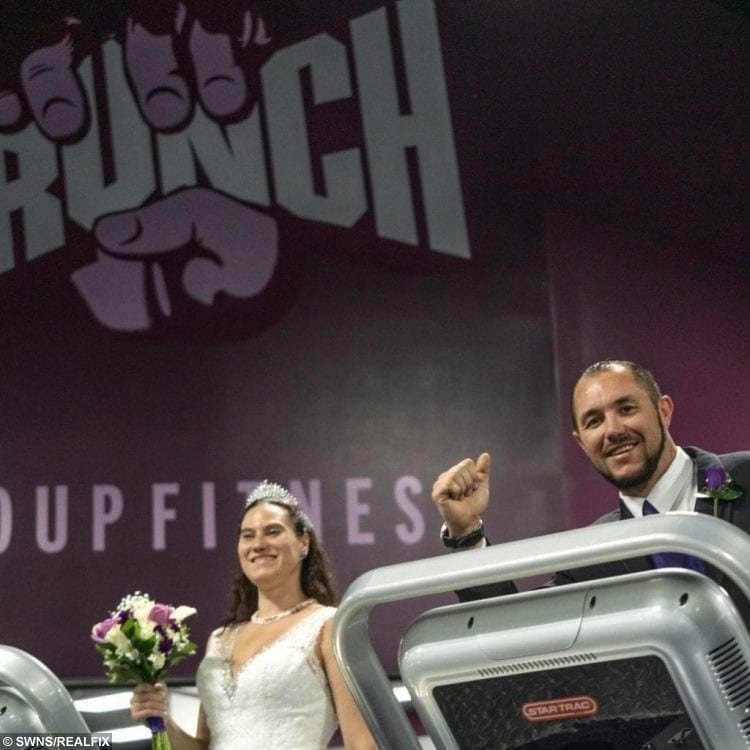 “Instead of turning to substances for an escape, we find it through physical activity.

“We go six times a week, it’s an important part of our relationship.”

Crunch Fitness manager Keith Smith, 41, offered the couple, who live in Las Cruces, the gym for their big day.

“He wanted to have a wedding there on Valentine’s Day and when he found out we were engaged, he asked if we wanted to be the couple,” said Andi.

“We were completely on board with it. It was something utterly different.”

Keith even became ordained as a minister to perform the wedding ceremony at an altar set up beside the treadmills.

Andi’s mom Patricia, 69, and her dad Larry, 71, filled the venue with an aisle runner, chairs decorated with pretty bows and an arch.

Her daughter Lorali, 15, from a previous relationship, was a bridesmaid along with Katie Frybarger, 24, and maid of honour Brenda Nevue, 38, while the couple’s son Liam was a page boy and Daniel’s niece Davielynn Valdez, six, was their flower girl.

After tying the knot in front of 60 guests, the husband and wife flexed their muscles with a session on training sleds. 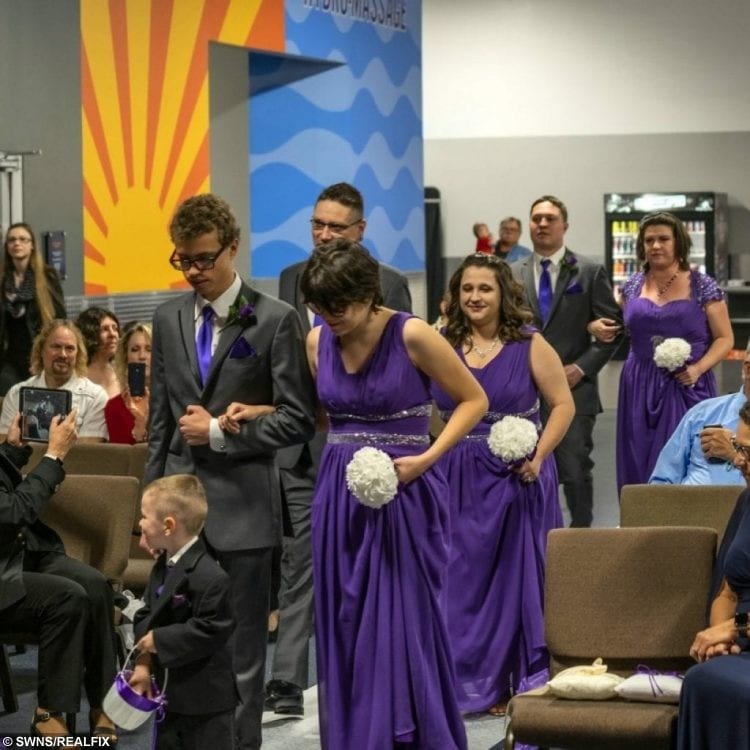 Andi said: “My parents brought all the decorations to make the gym look fancy and nice.

“Our church donated chairs for us to use.

“Daniel set up an arch with an aisle runner and decorated the chairs with bows.

“We got married in front of the arch on the side of the treadmills.

“We took a picture on the treadmills.

“Straight after we did a quick workout with the training sleds, pushing weights on artificial turf, it’s how football players train.

“Our reception was in the zumba room and we had Mexican and Italian food. 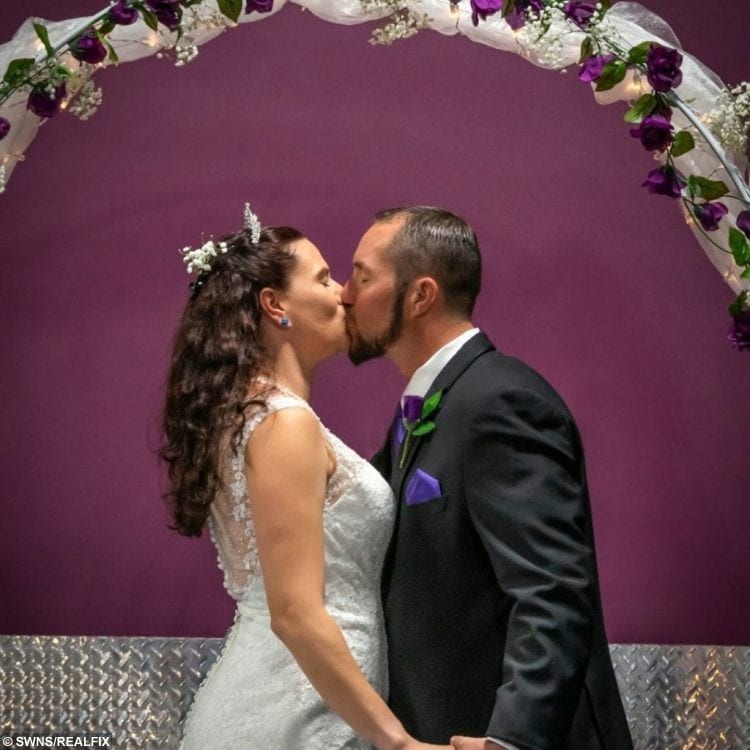 “Some of our guests thought getting married in a gym was a little unorthodox but they were supportive.

“They know that fitness is our thing now.”

Daniel and Andi met in April 2014 through mutual friends.

“We immediately started dating and just two weeks later I moved in with him,” Andi said.

“I knew as soon as I met him that he was the one.

“I was attracted to him physically, mentally and emotionally.”

However the loved-up couple were also both battling an addiction to deadly hard drug crystal meth.

Daniel said: “It was a daily habit, we were smoking it all day, every day.

“I was probably spending around $200 a day on drugs for us both.

“I didn’t have time for family or for my relationship.

“Meth took over our lives.” 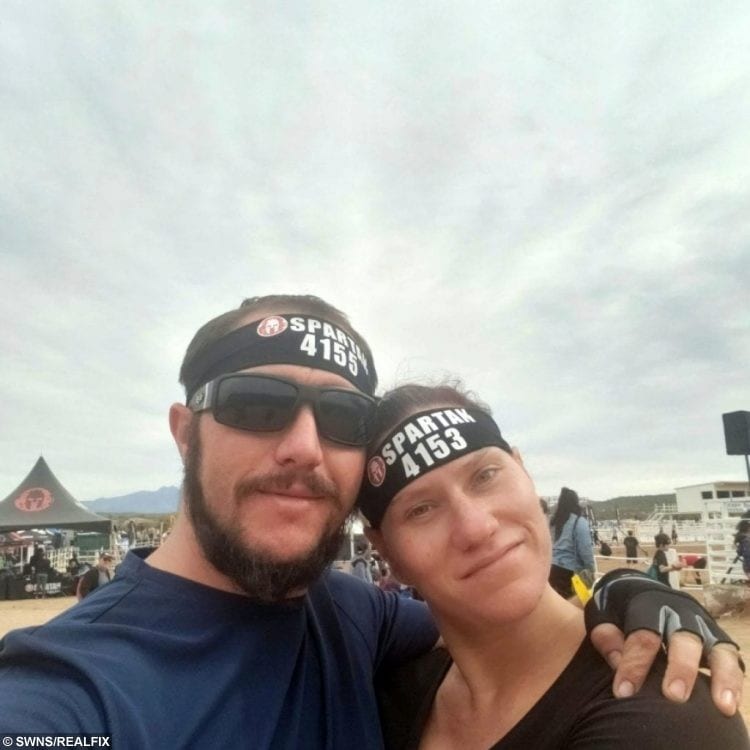 In June 2017 he was arrested for drug possession and spent six months behind bars in Dona Ana County jail.

He finally got sober and so did Andi.

“We got sober together,” she said. “I didn’t touch a drug while he was in prison and neither did he.”

The pair also stopped drinking and when Daniel was released they embraced exercise.

He said: “When I got out, we needed to do some different things.

“We had gained a lot of weight and were becoming unhealthy.”

Andi added: “I had gained about 50lbs. I think it was because I was depressed being away from Daniel.

“After we got out, as a term of Daniel’s probation, we were forced to live apart for a year.

“We didn’t seek out anyone else.

“We needed to stay sober and get our lives together.”

The gym became a big part of their relationship.

While other couples bond over dinners in romantic restaurants, Andi and Daniel loved taking high-intensity interval training (HIIT) classes together or sweating it out in a Zumba session.

Andi said: “The gym was where we got to spend time together and kept our relationship alive.”

The couple moved back in together in October 2018 and at Christmas Andi proposed to Daniel.

She said: “I proposed in front of our family over Christmas break.

“I bought Daniel a Denver Broncos mug and hid the ring inside of it.

“When he opened it, our son Liam said: ‘Will you marry my mummy?’

“He said ‘yes’ immediately. He had been trying to find an elaborate way to propose to me but I got sick of waiting.”

The couple will celebrate two years sober in June this year and are looking forward to married life filled with workouts.

Daniel said: “Exercise will always be a massive part of our lives.

“We go to the gym all the time and we’ve got no plans to stop now.”