A super-fit lorry driver has completed a gruelling Iron Man challenge just months after beating cancer – for the FIFTH time.

HGV driver David claims that staying fit is the one thing that has kept him alive and deliberately swerved doctor’s orders to stop doing marathons.

He said: “I don’t think I am unlucky at all getting cancer again, it’s just one of those things.

“I actually think I am actually quite lucky to have survived so many problems.

“I had cancer all last year – in August I had an operation and received 42 staples in my stomach.

“In October they had to remove more tumours – but I still managed the Manchester Marathon in April this year.

“Doctors and nurses are amazed by my achievement because they warned me not to do anything like this and now they can’t believe I’ve achieved it.”

David is currently cancer free but admits he needs continuous check-ups and added: “I do seem to get all the cancers so I need check-ups all the time – but hopefully it’s the last time.

“I would rather it be me going through this than any of my family members.”

David’s catalogue of cancer battles began in 1999 when he found a lump on his neck the size of an egg which was later diagnosed as Hodgkin Lymphoma.

Seven months of fighting the tumour ended when he underwent harsh radiotherapy and got the all clear.

However, after surviving a decade cancer-free he almost died after being rushed to hospital in January 2009 where an 11cm tumour was discovered on his right kidney – which had caused a blood clot.

It was then David was diagnosed was germ cell (gonads) cancer where he underwent four months of intensive chemotherapy and a nerve-racking operation – before being given the all-clear again for a second time.

However, desperately David was then diagnosed with skin cancer following a suspicious-looking mark on his cheek, which was quickly removed and cured, in November 2013.

He was then struck down with testicular cancer after his previous germ cell cancer had lain dormant and spread to his testicle tissue in January 2015.

This had grown into a large tumour while he was living in Spain but he had been told by a local doctor previously that “it was nothing”.

He was then healthy for 11 months – but the germ cell cancer returned to his abdominal cells in February 2016.

It resulted in a 12-week stint in chemotherapy and two operations, the last of which took place on October 4 last year.

But just 26 days later he entered a 10K trek and completed his first marathon in April this year in 3 hours and 26 minutes.

David, who remains in remission, has continued to set gruelling physical challenges and entered the Long Course Weekend Wales 2017 triathlon on July 15 – just nine months after his last op.

“I had to put off doing the Iron Man last year because of my condition, but it really spurred me on to do it this year.”

David said many cancer sufferers believe their cancer diagnosis blow is the end – but he wants to encourage others to follow his ethos of using fitness. 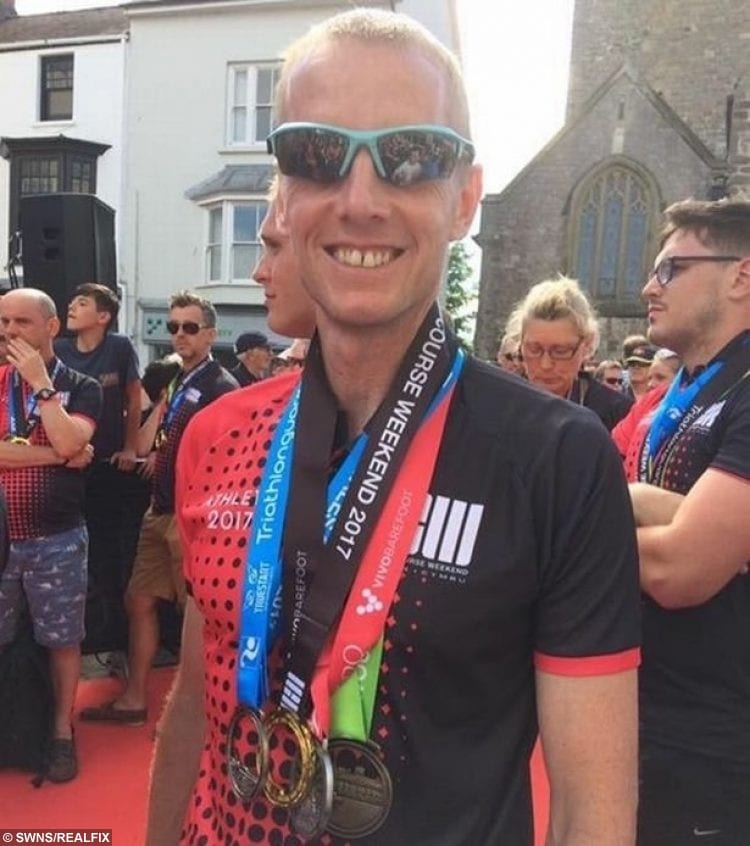 Asked about his fitness, David said: “I have always kept fit and when I was diagnosed with germ cell cancer doctors said that it would have killed me if I hadn’t been fit.”

“The events I have been doing have been for me and it is something I want to do. I have raised money in the past and I probably will do again but I want to inspire others.

He added: “Many people think it is the end of the world when you get cancer but, for many, it doesn’t have to be. I want to give others hope by seeing what I am doing.”

David, who has a stepdaughter Amy and son Lee, is hoping to marry to long-term partner Angela next month – and is already eyeing up future events.