by RealFix
in Crime, Health, Most Popular, Videos
0

Police have released shocking images of the aftermath of a fatal motorway smash to highlight the dangers of using a mobile phone behind the wheel.

The horror crash was caused by Christy George, 38, who made calls to her friend and husband as she drove to work along the M1.

As a result, she lost control of her Skoda and swerved towards the central reservation and collided with a lorry carrying Carlsberg beer.

The impact resulted in the HGV crossing the central reservation where it ploughed into a BMW killing Murray Simpson, 48, from London.

George, from Hucknall, Notts., was jailed for five years after she was found guilty of causing death by dangerous driving at Leicester Crown Court in July.

She was also convicted of causing serious injury by dangerous driving and perverting the course of justice after she tried to delete her call log to cover her tracks.

Today (Tue) Leicestershire Police released a shocking photo of the carnage caused by the eight vehicle pile-up between junctions 21a and 22.

It shows the mangled wreckage of the lorry with dozens of beer barrels strewn across the carriageway, as well as a smashed up van and a car being driven by Liese Bowers-Straw.

Liese, 47, was also severely injured in the collision, which happened on November 25, 2014.

The married mum has now spoken out about her traumatic ordeal as part of the campaign to highlight the devastating consequences of using a mobile while driving.

Liese had only received an MBE for her services to the Border Force a week before the tragic crash.

But she has now been left a prisoner in her own home for the past 20 months after suffering horrific injuries.

Liese, from Kirkby-in-Ashfield, Notts., broke her neck in two places, tore muscles across her hips and stomach as well as suffering brain injuries.

She said she hasn’t been able to leave her home since the tragedy and can’t bear to get into or even look at a car.

She also has to close the curtains if she goes into one room at her house because it looks out on to a road.

Liese added: “If I can stop just one other person suffering what I have suffered then it will be worthwhile.

“I remember seeing the headlights coming towards me where headlights shouldn’t be and I remember thinking that’s it, I’m a goner, I’m dead.

“Then I don’t remember anything until the following day.

“The collision has completely changed my way of life. I have gone from having a career I loved, a job that I loved, doing a lot of work, to being a prisoner in my own home.

“Just think before you pick that mobile phone up.

A warning film has been created by East Midlands Operational Support Service (EMOpSS), a police team which covers roads policing and collision investigation.

Detective Constable Pete Davies, from Leicestershire Police, who helped investigate the crash, said: “It was the largest collision site I have been to and it was a shock to see.

“It involved eight vehicles and the collision scene stretched for miles.

“As police officers we are constantly warning people about the dangers of distracted driving but I hope when people hear Liese’s story they will finally take notice.

“Texting, accessing the internet are things that should not be done while driving. 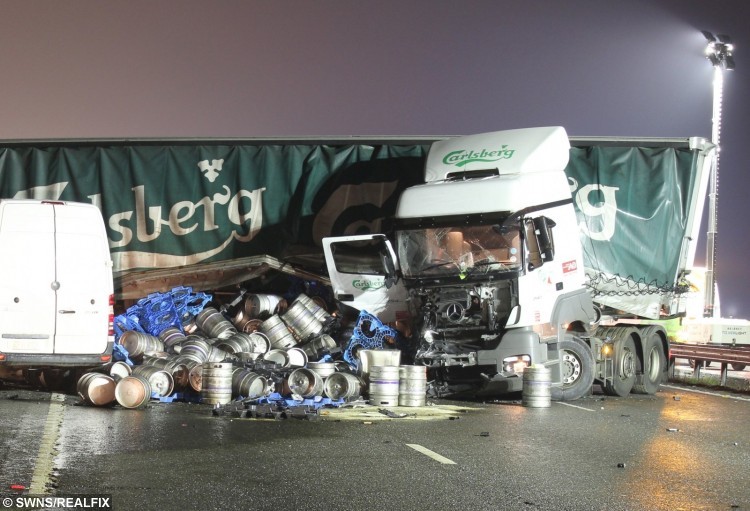 The roads are so busy now I think people should concentrate on the road. Nothing is that important it cannot wait.

“Someone died in this collision and Liese has been left with the most appalling injuries as a result of someone who was too selfish to wait.

“When you have to knock on a door and tell someone their loved one is not coming home you realise just how damaging using a mobile phone can be.”

* EMOpSS provides roads policing and collision investigation to the communities of Leicestershire, Lincolnshire, Northamptonshire and Nottinghamshire.