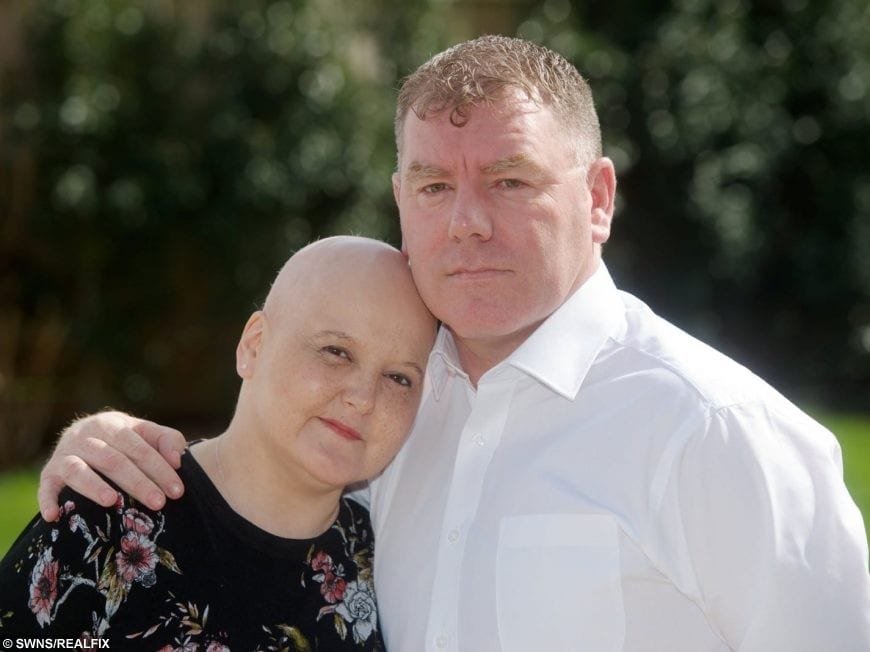 A nurse who died from cervical cancer had been misdiagnosed by the NHS for over two years, an inquest heard.

Mum-of-two Julie O’Connor waited two and a half years for a diagnosis despite multiple hospital referrals from her concerned GP.

Tragic Julie, an NHS theatre recovery nurse for 13 years, was sent for tests with the NHS on numerous occasions, her inquest was told.

But multiple gynaecologist appointments and examinations consistently told Mrs O’Connor that her condition was benign, an inquest was told.

She was finally diagnosed with cervical cancer in March 2017 by a private consultant gynaecologist.

Julie was told she had cancer two and a half years after her first GP referral on the NHS.

Avon Coroner’s Court heard one of the gynaecologists who examined Mrs O’Connor admit: “We missed it on multiple occasions”.

Speaking after the first day of the inquest, her husband Kevin, 50, has now voiced his “grave concerns”.

He said there were may have been many more patients who received false reports and could have been diagnosed earlier.

The inquest heard that the nurse’s nightmare began in September 2014, when she went for a routine cervical smear test.

The test results, as reported by the North Bristol NHS Trust, came back ‘negative’.

But Mrs O’Connor and her husband Kevin later found out this was wrong.

The concerned GP used the ‘two-week wait’ cancer pathway to refer her to a gynaecologist at North Bristol NHS Trust, who saw her on October 30, 2015, the inquest heard.

The gynaecologist, Mr Feras Naaisa, at Southmead Hospital, Bristol, performed a hysteroscopy on Mrs O’Connor, using an instrument to magnify and inspect her cervix.

In December 2015, the laboratory results were reported as normal – but the inquest heard that a later review into Mrs O’Connor’s pathology reports revealed there were abnormal cells on the biopsy.

Speaking at the inquest, Mr Naaisa said: “It is very unusual to have a positive biopsy and a negative smear.

“I inspected the cervix thoroughly, and it did not look suspicious to me. That, and a negative smear reassured me.”

Mr Feras Naaisa added: “I totally accept the reports – we missed it on multiple occasions.

“I must say, it’s a tragic story, but it’s clear to me that the department is very keen on sharing the lessons learned, so that future patients get better care.”

The inquest heard that the next time Mrs O’Connor was seen was in August 2016, by GP Rebecca Williams at St Mary’s Street Surgery.

Dr Willams said in a statement that Mrs O’Connor was still suffering vaginal bleeding, and a gynaecologist had recommended her having a contraceptive coil inserted.

The GP said: “Before inserting the coil, I examined her cervix, and it felt abnormal and harder than I would expect.

“It was atypical and irregular in appearance. I felt the bleeding was coming from the cervix.

“I proceeded with the insertion of the coil as advised, but referred her back to the gynaecologist, once again using the two-week wait pathway, so she could be seen again.”

A further two gynaecologist examinations, on August 30 and November 1, 2016, told Mrs O’Connor her cervix was ‘normal’, and she was removed from the two-week pathway.

On November 1, she was told that the bleeding was due to the mirena coil she had had inserted, and that it would “calm down”.

But she returned to Dr Williams on November 22, complaining that the bleeding was ongoing – and, once again, the GP wrote a referral letter back to the gynaecologist at Southmead Hospital.

Mrs O’Connor was seen again on February 1, 2017, and was placed on a waiting list to undergo an endometrial ablation – to stem her bleeding.

A month later, on March 6, 2017, Mrs O’Connor and her husband wrote to Dr Williams, asking to be referred to a private consultant gynaecologist.

And on March 9, she was seen by Mr Fraser McCloud at The Spire Hospital, who told the inquest that he was “highly suspicious” she had cancer.

On 23 March, Mrs O’Connor returned to The Spire Hospital and was seen by Mr McCloud’s colleague, Mr Murdoch – who formally diagnosed her with stage 2b cervical cancer.

The inquest heard that Mrs O’Connor went on to undergo a gruelling course of chemotherapy and radiotherapy at Bristol Oncology Centre.

At around the same time, she started complaining of leg and hip pain, first in her right hip in February 2017, which was reported as normal, and later, in August, in her left hip and leg.

The inquest heard that MRI scans in March 2017 and September 2017 at The Spire Hospital showed no signs of the cancer affecting her bones.

But a review of the scans in October 2017 showed a lesion that may have been of concern in her left hip.

In October 2017, Mrs O’Connor underwent a hip replacement surgery on her left hip, before having further radiotherapy on both hips.

In January 2018, an oncology report tragically revealed signs of cancer on various other parts of her body.

And in May 2018, her hip replacement became infected, putting a halt to chemotherapy she was undergoing.

By January 1, 2019, Mrs O Connor’s cancer had become extensive – and she became increasingly unwell, deteriorating until she passed away on February 4.

And, in a statement read to the inquest, her husband said: “I am extremely concerned that a proper wide, independent, thorough investigation has not taken place.

“I believe there were many more patients who could have been diagnosed earlier.

“I am also concerned about the number of pathologists who examined Julie.

“Julie and I had grave worries about the care she received at North Bristol NHS Trust, and therefore paid for a private consultant.

“Almost immediately when Julie went to the Spire Hospital, he had suspicions that it was cervical cancer. This was only a month after she was last seen at the NHS Trust.

“North Bristol NHS Trust have failed to live up to their policy of being open, honest, and transparent,” Kevin added.