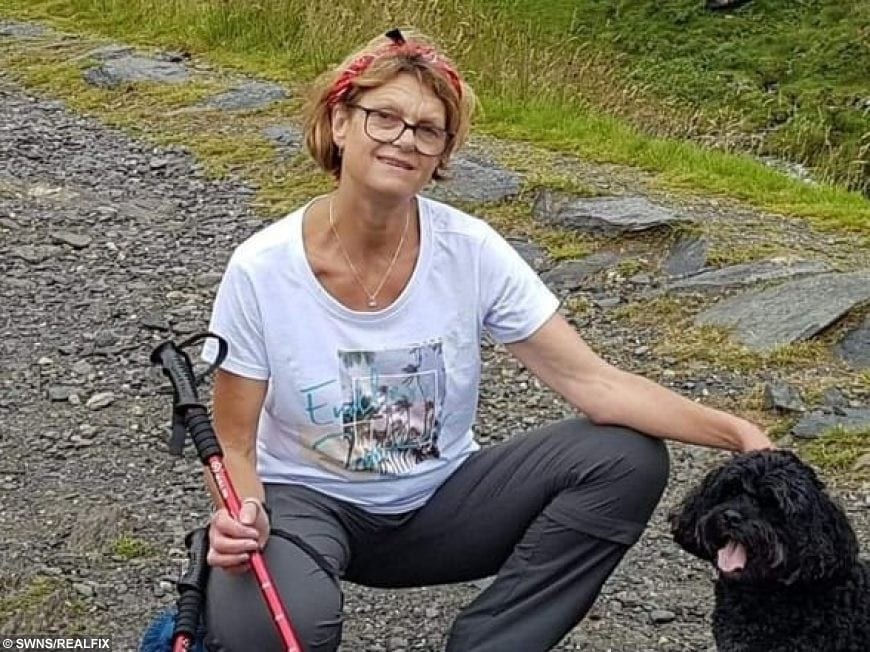 A widowed mum with cancer has been forced to rely on food banks to feed her 13-year-old daughter thanks to Universal Credit.

Deborah Parsons, 52, was diagnosed with breast cancer in July this year and now said she has been ‘plunged into poverty’ thanks to the ‘dire’ benefit system.

The mother, better known as Debs, said she is “afraid to put the hearing on” as she is too unwell to work – but has been given a total of £0 in Universal Credit.

Debs, a widow from Sidmouth, Devon, said she is now under “enormous financial pressure” as she has had to give up her job so she can attend weekly chemotherapy treatments.

She said: “We’re all just a diagnosis away from disaster. I can assure you, if I was well enough to work, I wouldn’t need a work coach.

“I just don’t know what I’m going to do. I feel guilty that I’m not working at the moment and that’s wrong.

“I’ve just been so worried with how I’m going to pay for everything.”

Debs has been relying on a £560 payment from a widowed parent’s allowance to pay her mortgage.

She has been receiving the payments since she was pregnant with her 13-year-old daughter, after the death of her husband.

Debs applied for a number of benefits, including Universal Credit and after a five-week wait, she was told that she would not receive any money.

She was told the decision was because of the widowed parent’s allowance and a private pension from Royal Mail, which amounts to £42 a month.

She said that she hopes to return to her cleaning business when she is able to work, but has lost a lot of her clients as they are unable to wait for her to return to work.

Debs added: “People want a cleaner not an oncology patient.

“It’s not just me I’m fighting for, it’s everyone else like me too. We’re all human and we all come and go the same way.

“It’s tough having the diagnosis then having to fight for the support.

“Illness is just too easily overlooked as actually we are all just one diagnosis away from being in this hardship.

“We all think it won’t happen to us. But it can happen to anyone.”

Debs explained that whilst she has stage 1 breast cancer, she has had to have “invasive” surgery to ensure that it had not spread to her lymph nodes.

She said: “This treatment is to make sure no cells have escaped into my body.

“I’m home but attend hospital weekly for chemotherapy and see my oncologist every three weeks usually a different day.

“I have heart traces every month or so and I see my surgeon every two months. It’s a whirlwind having cancer.”

Debs uploaded a video to her Facebook page before she was told that she would not be entitled to any Universal Credit payment, “to highlight the serious shortfalls of the new universal credit benefit”.

She added: “I’ve always worked very hard and paid my National Insurance contributions but after a breast cancer diagnosis at the end of July I was signed off sick.

“I’ve had surgery and am now in the midst of a chemotherapy/herceptin regime.

“During this time of course I was also coping with my diagnosis, treatment, the tragic, sudden death of my mum and a heartbroken 13 year old daughter.

“I still have no idea how much universal credit I will be entitled to. I will be told on Monday and my first payment will be 5th December.

“Very kind charity donations have helped keep me afloat during these past months and the food bank have kept Beth and I fed.

“Surely in a rich, civilised society this shouldn’t be so.”

A DWP spokesman said: “Ms Parsons is not entitled to Universal Credit as she receives over £600 a month in Widowed Parent’s Allowance plus a private pension.

“We are also in the process of dealing with Ms Parsons’ PIP claim and will be in contact once her case has been considered.”

« Previous post 'I Wanted Our Village To Stand Out' - Cash-Strapped Village Which Couldn't Afford Christmas Decorations Gets Massive Tree And Lights - Thanks To Fundraising By Local 13-Year-Old
Next article » Flaming Heck! A Coconut Almost Killed Me - Just Days After My Wedding