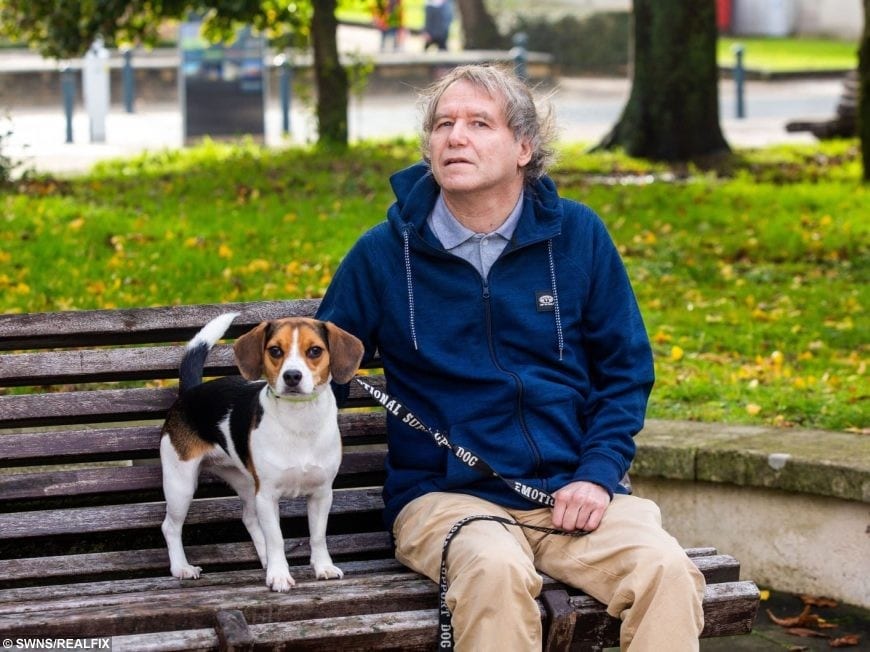 A vulnerable man has been hauled to court and faces eviction over his medically prescribed ’emotional support companion dog’ – despite doctors demanding he be allowed to keep it.

But things changed when Christopher’s doctor prescribed him an emotional support and mental wellness animal companion – a beagle called Tammy in December 2018.

Despite Christopher’s pet being prescribed by a doctor, when Plymouth Community Homes found out, they ordered the dog had to be rehomed.

And if he refuses, Christopher will have to move out of his home of eight years.

The landlord said Christopher is in breach of his tenancy agreement which states he is not permitted to keep a dog as he lives in a high rise flat, according to their pet policy.

The housing association took him to Plymouth County Court this week (26th) in a bid to evict him over an alleged a breach of a tenancy injunction.

But a judge gave the man and his dog a stay of execution – saying they could carry on living together until another hearing in January.

There is a section in Plymouth Community Homes Pets Policy that explains pets are allowed if they are medically prescribed.

PCH said they would rehome them – but Christopher’s GP says moving him would make his condition worse.

Christopher has been fighting to save his dog since February – leaving him feeling house bound, struggling to communicate with others and not eating properly.

Speaking after the hearing Christopher, of Plymouth, Devon said: “Without Tammy I would not be able to get out of the house.

“PCH should not be able to treat people with mental health the way they do.

”They should treat people with a bit of respect. I cannot move to a new place as I have friends in the building who support me.

”If they moved me somewhere else I would not know anybody. My neighbours all agree that this is disgusting. Tammy has not been any trouble at all.

”There have not been any complaints. I just don’t understand it. They allow deaf dogs, so why not her?

“I have got a bit of encouragement from the judge. I had stopped eating as I was so anxious – but hopefully I can start again. She seemed to care.”

Christopher cared for a pet rabbit since 2013 who helped provide him comfort, but when his rabbit died late last year, his mental health deteriorated without a companion.

In multiple letters Dr Stroffregen writes: “The dog is very important for [Christopher’s] mental health and reduces his anxiety and loneliness.

“I think it would be quite cruel to take the dog away from him and equally he wouldn’t be able to cope well with finding a new place.

“He has severe mental health issues and his dog keeps him stable.

“I strongly advise that everything possible has to be done to let Christopher keep his little dog, as it is a lifeline for him.

“A move would be disastrous to his mental health in my opinion. He has already expressed suicidal thought about this situation.

“I am extremely concerned about his mental state and taking away his dog will likely worsen his suicidal thoughts and might well tip him over the edge.”

There is a section in Plymouth Community Homes Pets Policy that explains pets are allowed if they are medically prescribed.

It states: “By definition, Assistance Dogs are not pets and are therefore excluded from the main provisions of this policy.

“By Assistance Dogs, we mean dogs that have been trained specifically to assist people with a disability, such as sight or hearing loss, restricted mobility, autism or post traumatic stress disorder.

“For all other disability needs, where pet-ownership has been identified as a therapeutic
aid, we will consider requests for ‘reasonable adjustments’ to be made as part of an
overall needs assessment.”

At the court hearing solicitor Vincent Davis, representing Plymouth Community Homes, said the tenant was “in breach of his tenancy for keeping a dog in the property.”

He added: “This is also in breach of the landlord’s pet policy.”

He said the tenant should be required to remove the dog “within seven days of servicing the injunction order.”

He said the agreement was clear that he should not keep any dog or cat in the property on a temporary of permanent basis.

He added: “The defendant acquired the dog contrary to terms of his tenancy agreement and to the pet’s policy.

“This is to not keep any animal in a sheltered flat with the exception of a small case of birds or fish.

“It is common ground that the defendant does have a dog. This has been going on for some time, since February. He has been offered the choice between re-homing the dog, or moving to an alternative premises that has its own garden.

“Most tenants would jump to move from a multi-storey block to their own garden but Mr Palmer has not engaged with that.

“Various efforts have been made but he has not engaged with the process. This is a long standing policy that was adopted in 2011/2012. The reasons why you cannot keep pets in a high rise flat is the nuisance it causes to other neighbours.

“We recognise the benefits to having a pet but to have one in such close proximity to others causes problems with urine and faeces in communal areas.”

He also highlighted the problem it could cause during any evacuation procedure.

He added: “There is good reason why it is written into the tenancy agreement.”

But Judge Vanessa Priddis said: ””If Mr Palmer was blind and had a guide dog would we say the same?”

“He is disabled and ten minutes to deal with and make a decision on this is not fair. There are technical and legal issues to consider.

“I have to consider his mental state and if he understands that. This has been on-going since February and I need time to take proper advice.

”We don’t want to rush it. I am not going to sacrifice dealing with the case fairly for speed.”

She then addressed Mr Palmer and told him: “I know this has been very distressing for you.”

One of his neighbours, who accompanied him to court, said: “The housing association may think they are legally right, but they are morally extremely wrong.

“No one has complained so why are they doing this to him?”

The case will resume on 9 January 2020 for a full hour hearing to look at aspects around the equalities act and how they correlate with Christopher’s case.