Woman is owner of oldest transplanted kidney in the world

A charity worker has been left stunned after being told she is the owner of the oldest successfully transplanted kidney in the entire WORLD.

Sue Westhead, 68, has astounded medical experts with her 100-year-old transplanted kidney – which was donated to her by her mum Ann Metcalfe 43 years ago.

Shocked Sue received the successful transplant at Newcastle’s Royal Victoria Infirmary in 1973 after being diagnosed with kidney disease.

The kidney was donated by Ann, who was 57 at the time, after it was found that Sue only had the equivalent of a tenth of her kidney function.

Medical boffins say there is not a registered kidney which is older than a century and despite a max lifespan of a donated kidney being 20 years, Sue, who takes 20 tablets a day, is still going strong with Ann’s organ.

Sue, of Sunderland, Wearside, said: “I am absolutely stunned and amazed – I only expected my kidney to last about five years and here I am 43 years later.

“My mother would have been 101 in November and it’s really down to her good genes – I would like to pay tribute to my mother for her gift of life to me.”

Sue, who works for the Nazareth Trust Christian charity group, says during the 50s it was a scary time for people to have kidney disease.

Describing her operation, Sue said: “It was a pretty scary time – even when I was still on the ward people were dying. 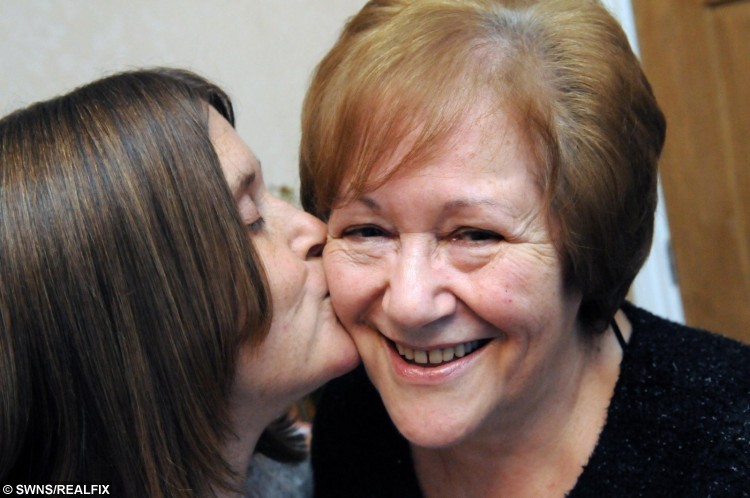 “My mum literally gave me life because I wouldn’t have lived much longer – I could hardly walk, I was a different colour, I was yellow and all of a sudden I had a rosy glow.”

Tragically, Ann died at the age of 69 after being hit by a car while crossing the road.

Divorced Sue, who was advised by doctors not to have children, said: “I took it really badly when my mum died, it took me years to get over it.

“Having her kidney does make me feel close to her, sometimes I will touch my stomach and now my mum’s still with me.”

Sue said all of her family, including her dad, brother and sister, were tested, but it was found Ann was the best match.

Since the transplant, Sue says she has looked after herself and rigorously taken the almost 20 pills a day to make sure her donated organ isn’t rejected.

Experts at the British Transplantation Society, the Human Tissue Authority, NHS Blood and Transplant and Kidney Research UK say they don’t know of anyone else with a transplanted kidney more than 100 years old.

President of the British Transplantation Society and Professor of Transplant Surgery at Newcastle University, Professor Derek Manas, said: “It’s an amazing story of encouragement and hope for people on dialysis and for encouraging people to donate as living donors or to join the Organ Donor Register.”