A mum was horrified to discover she had a tumour like a ‘hard-boiled egg’ in her brain – after she went to the doctors because her favourite boots didn’t fit anymore.

Kath Wilson, 52, first went to a GP who advised her to lose weight – but asked to see a specialist after she continued to put on the pounds.

Doctors at Hull Royal Infirmary discovered a non-cancerous tumour the size of an egg in her pituitary gland and she needed brain surgery.

Kath managed to make a full recovery, losing two stone in the process, dropping from a size 16 to a more comfortable size 10 to 12 – and now snuggly fits back into her favourite pair of shoes four years after the operation.

Step mum-of-three Kath regained not just her health – but also her hearing which was affected before the tumour was discovered.

Kath, of Hull, East Yorks., said: “I’ve got tonnes of shoes and boots and they were getting tighter and tighter – but then I noticed I couldn’t get my gloves on.

“My nose got bigger and I had to have my wedding ring made bigger because it no longer fitted on my finger.

“My feet grew from a size seven to a size nine-and-a-half and even my husband’s shoes didn’t fit me.

“I had to go out and buy new pairs. My feet have now shrunk and I can fit back into my favourite boots.

“The shoes I bought while my feet grew have now all been donated to charity.”

Kath developed problems with her hearing and had hearing aids and about 18 months later her hands and feet began to swell and she started putting on weight in 2012.

But despite attending a Weightwatchers slimming class Kath went to her GP who told her to lose weight.

She said: “At Weightwatchers I couldn’t lose weight because of these growth hormones.

“It was heartbreaking that I was sticking to the diet religiously and I would go back and be told I’ve put two pounds on.

“I could have dieted for England and I still would have put on weight.”

Although she was sticking to her healthy eating plan, her weight continued to increase because, unknown to her, the tumour was flooding her body with growth hormones.

When stepdaughter Vicky, 38, a nurse, pleaded with her to return to her GP and ask for a referral, Kath was sent to see an endocrinologist and underwent tests.

Kath said: “It was a tumour but he told me he could almost guarantee it wasn’t cancerous.

“He said it was the size of a hard-boiled egg inside my head and it needed to come out.”

Kath, who is married to Paul Wilson, 64, and stepmother to Vicky, Kirsty, 41, and Leanne, 35, worried about the operation – which involved surgery through her nostril into her brain.

Speaking about her thoughts on the operation, Kath said: “I was frightened to death at the thought of it but they said if I didn’t have the operation, I would go blind, have diabetes, lose my hearing and it could have problems with my kidneys and liver. 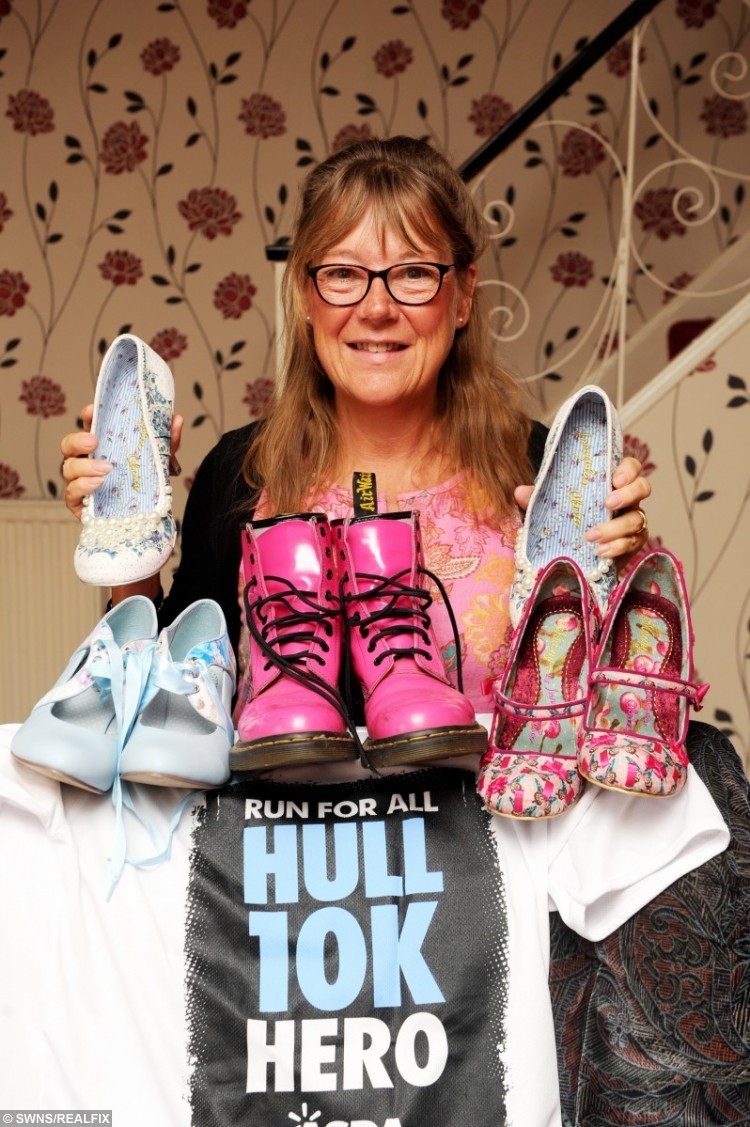 Kath had surgery in September 2012 but complications meant she spent 11 days in the hospital, lying completely flat in bed.

However, she made a full recovery, was back working full-time as a technical officer with Aunt Bessie’s in Hull and her hearing was restored.

Much to her delight, she was also able to wear her favourite shoes and boots again.

Kath said: “I’m absolutely fine now. I have to take steroids each day but other than that if you didn’t know – you wouldn’t know.

“I’m back running and swimming and I’ve lost just under two stone.”

Kath took part in the Hull 10k in June and raised £1,250 for staff with support from her family, friends and work colleagues, returning to the hospital to hand over the money to charge nurse Paul Johnson.

Thanking staff who helped her through her time at the hospital, Kath said: “The staff work so hard, they were absolutely brilliant.

“They worked long hours but they always had smiles on their faces.

“Nothing was too much trouble for them and that’s so important when you’re recovering from major surgery, like I was.”

She added: “By doing the 10k, I just wanted to thank them for all they did for me. They were absolutely amazing.”