Karlee Daubeney, 20, was trapped in a chiller in Subway for eight because of a dodgy door handle. In a bid to catch the attention of CCTV operators she wrote help me in ketchup on cardboard which she slid under the door. A Subway worker was trapped in a chiller for eight hours and only escaped by writing 'Help me' in ketchup and slipping it under the door. See SWNS story SWSUBWAY; Terrified Karlee Daubeney, 20, had finished a late shift and was closing the cold store for the night when the door locked and she couldn't get out. As her temperature dropped and she realised no one else would be coming to the Gloucester store until morning she decided to improvise with a bottle of ketchup.

A Subway worker trapped overnight in a chiller for eight hours tried to escape by writing ‘HELP ME’ in KETCHUP and sliding it under the door.

Terrified Karlee Daubeney, 20, was working the late shift alone and shutting down the store when she became trapped.

She put milk away inside the cold store around 11.15pm when the door closed behind her and locked her inside.

Karlee was only wearing trousers and a thin Subway top with the temperature inside the cold room just a few degrees above zero.

When she realised no one else would be coming to her aid she tried to get help with her SOS message in ketchup – hoping it would be spotted on CCTV by security staff.

But it was not seen and she remained trapped in the store in the centre of Gloucester until 7.30 the following morning when the day shift arrived and opened up.

The franchise responsible for the store is due to appear before magistrates in connection with the incident that happened on December 27.

Karlee said: “At first I was in a state of panic and I was looking for anything that could have opened the door.

“I was trying to write ‘help’ on pieces of cardboard to slide under the door. I think it was with ketchup or mayonnaise.

“It got to the stage I was so cold I didn’t have the energy to bang on the door and I only had leggings and a Subway top on.”

Karlee said she has been left with physical and mental damage from the ordeal and was told she came very close to catching hypothermia. 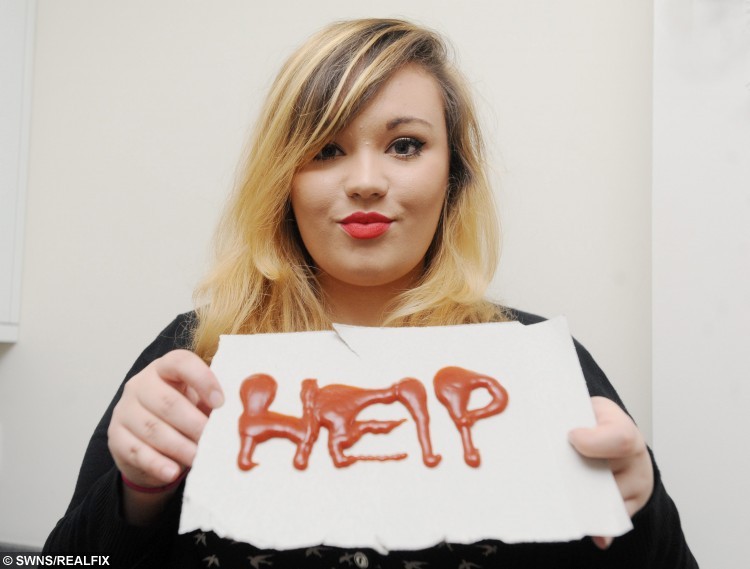 She added: “My muscles became so cold I found it really hard to walk for a few days, I had migraines and dry skin around my nose.

“When I went to hospital the next day I was told I was close to having hypothermia and I made myself as warm as I could when I got home.”

CM Ventures, who have the franchise for the store, have been charged with health and safety offences.

They have been accused of not ensuring, so far as reasonably practicable, the health, safety and welfare of its employees.

The company pleaded not guilty at the preliminary hearing at Cheltenham Magistrates court on 26 October.

Subway said: “As this case is currently under investigation we are unable to comment further at this stage.”

The adorable kitten that thinks she’s a dog!

The adorable kitten that thinks she's a dog!