HomeHealthMost Popular‘Trying On The Dress Again Was So Surreal, It Absolutely Swamped Me!’ – Shrinking Bride Lost Over 100lbs After Her Wedding 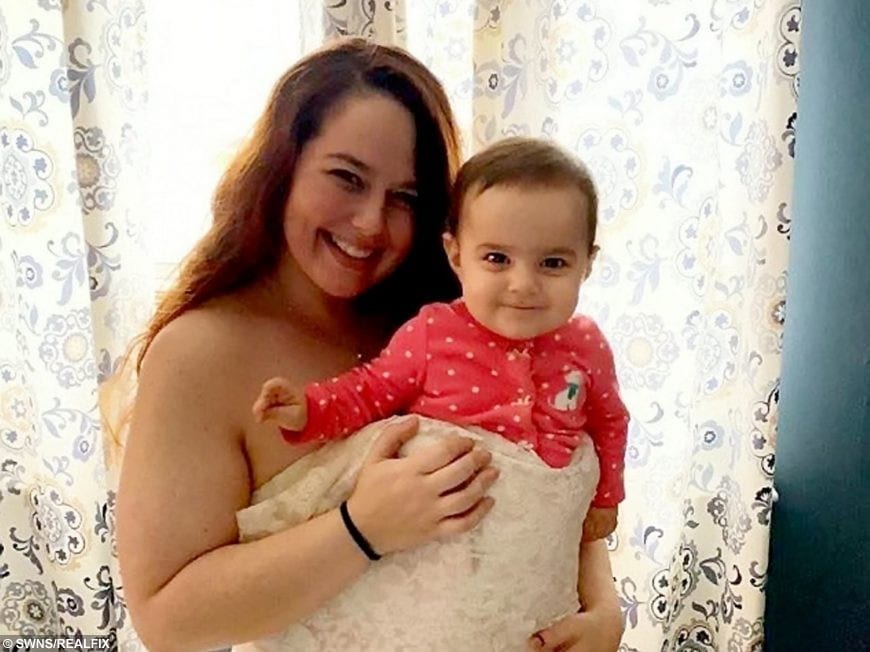 A bride who has lost over 100lbs since her wedding day has celebrated by posing in her white dress – with her AND her baby inside.

After welcoming their daughter Eloise (corr) in January 2019, Angela started her weight loss journey and has since lost more than 7st in 11 months .

To celebrate hitting her 100lb mark earlier this month, pharmacy technician Angela decided to try on her old wedding dress and was amazed by the difference.

There was so much room she could even fit 11-month-old Eloise into the dress.

Angela said: “I’d just been to the wedding of one of my friends who was actually the maid of honour on my wedding day.

“In my wedding photos, she’d looked so tiny hugging me in my size 28 dress, and seeing her on her big day made me remember how I looked at my own wedding.

“A few days later, I hit my 100lb mark and I wanted to mark the occasion so I thought what better way to celebrate than trying on my old wedding dress.

“Trying on the dress again was so surreal, it absolutely swamped me and I could even fit my 11 month old daughter inside the dress with me, there was that much room!”

Angela met chef Joshua when they were both just four years-old at their local church after their Sunday school teacher parents became friends.

It wasn’t until they turned 16 that Joshua finally asked Angela to be his girlfriend, and the pair dated for eight years before he proposed on top of a mountain in 2015.

With a date set for 28 May 2017, the happy couple began to plan for their dream wedding in Pinehill, New Jersey, but finding Angela’s dream dress in a US size 28 proved to be a challenge.

Angela said: “I was excited to marry Joshua, I couldn’t wait to become his wife, but dress shopping was an absolute nightmare.

“I felt super self conscious trying on dresses, especially as the bridal shops had a very limited selection of dresses in my size.

“I remember going into one bridal shop and they literally had nothing that could fit me so I just left without even trying anything, it was mortifying.

“I knew I wanted blush and lots of lace, and I spotted the perfect dress but they only had it in a US size 10 (UK size 14).

“I knew it was The One but when I tried to put it on just to get an idea of how it would look, the zip wouldn’t budge an inch.

“I took a chance and paid $3,000 upfront for a special order on the dress and then had to wait three months for it to arrive which was torture.

“It cost more because of the size, and then I had to pay $500 on top for alterations and added extra boning into the sides to make it more fitted otherwise I was left with a muffin top.

“Despite the embarrassment of choosing a dress, I felt perfect on the day, I had the best wedding day ever and I love the pictures from the day I got to marry the love of my life.”

As they settled into married life, Angela decided she wanted to lose weight but her quest for a smaller dress size was put on hold when she found out she was pregnant a year after their wedding.

After struggling with PCOS for many years, the couple were thrilled to be expecting a baby but Angela’s pregnancy journey was clouded with health issues from just two months in.

Angela suffered from hyperemesis – extreme nausea and vomiting – throughout her pregnancy as well as high blood pressure which doctors said was due to her weight.

She was induced at 37 weeks because her weight had made her blood pressure so high, and was in labour for 70 hours after her epidural failed during her c-section.

Thankfully, baby Eloise was born healthy on 2 Jan 2019 but the traumatic birth gave Angela the push she needed to start seriously losing weight.

The determined mum shed 40lb on a meal plan set by a nutritionist before undergoing a gastric bypass at Kennedy Jefferson Surgery on 4 June 2019.

Over the next five months, Angela lost another 62lb to reach an incredible 12st 3lb and now wears clothes she loves in a tiny US size 6 (UK size 10).

Angela said: “I was so unwell during my pregnancy and Eloise’s birth was so traumatic. The doctors said that my epidural could have failed due to how big I was, which was really hard to hear.

“Seeing how my weight had affected my health so drastically, I vowed to lose weight so I could become a more active and healthy mother to our little girl.

“I was scared of going under the knife again after how traumatic my c section was, but I’m glad I did it because it has changed my life for the better.

“I’ve lost 102lb over the past 11 months, dropping down to 173lb and a size 6 and I feel so much healthier and happier – I suffered with depression for a number of years and it’s just lifted as I’ve lost weight.

“Joshua joined me on my diet to support me and even he has lost 40lb which is amazing!

“Eloise is a very mobile little girl, and before I lost the weight, I could barely lean over her crib to get her out but now I’m chasing after her and not immediately getting out of breath and I’m so thankful for that.

“The only negative to all of this weight loss is the loose skin, which I do want to have removed, but I’ll have to wait to do that – right now my priority is my family and my health.

“It felt amazing to put my wedding dress back on and even fit Eloise in it with me. Mine is definitely a true love story, Joshua has literally loved me through thick and thin!”