A young athlete is set to walk for the first time in two years after begging for his leg to be amputated.

Cameron Radigan, 16, had his leg removed on June 26 — three years after pleading with doctors.

The archery champion believed having the surgery was the only way he would ever walk again after years of it causing him “nothing but pain”.

Cameron was just two when doctors diagnosed a tumour in his leg and spent months in hospital.

His left leg was seriously damaged and the school-boy was left suffering in agonising pain after the lifesaving bone cancer treatment.

By the age of eight Cameron struggled to walk, three years later he needed crutches and by the age of 14 the youngster from Galston in Ayrshire, was in a wheelchair.

But just 11 days after surgery at the Royal Hospital for Children in Glasgow, Cameron was given the all clear to compete in national archery championships.

He said: “Since Cameron was 13 he has been begging for surgeons to amputate his leg as it was causing him nothing but pain and was completely useless.

“We had to have a meeting with the CEO of Greater Glasgow health board before we were able to convince them to carry out the procedure.

“Cameron said he was on a level seven of pain on a good day before the surgery, now he says after the surgery it can be as low as three.

“I am so proud of him, he is already walking with two crutches and going to physiotherapy to help train his muscles to use his prosthetic leg.

“He is a completely different person. He’s never let it get him down but since the surgery, he has just been so pleased.

“He has always been fiercely independent and determined to do what he wanted to but this has just spurred him on even more.

Dedicated Cameron he will not let the surgery define him

He said: “I am an archer. I am not a cancer survivor. I am not an amputee. These are things that happened to me but do not define me.

“We all deal with challenges every day in life.

“We deal with these challenges to the best of our ability and we carry on. Is that not the definition of determination?

“If we manage to find time to train for a sport we love with our friends is that not the definition of dedication?

“I am a dedicated and determined archer, and I can’t wait to meet my friends on the shooting line.”

Cameron’s dedication to archery has seen him now ranked second in the world.

Richard said: “Cameron was two when he was diagnosed with a cancerous tumour I his left leg.

“While undergoing 18 months of chemotherapy and six weeks of intensive radiotherapy Cameron’s surgeon developed a procedure to remove the tumour that may not result in amputating his leg.

“To our delight when Cameron came out of the seven-hour surgery he still had his leg.

“We were informed that the surgery had damaged his leg and he may not have full use of it.

“When the plaster was removed from his leg two weeks later for a check he ran out of the plaster room.

“The surgeon decided not to put another on him.

“His surgeon told Cameron due to the damage to his tendons he would never be able to stand on his tiptoes – six months later he was standing on his tiptoes.

“His surgeon then told him he would never be able to hop, again six months later he was hoping.

“He then told Cameron under no circumstances should he try and ride a bike.

“At six years old Cameron was out with his friends and he convinced them to help him ride a bike.

“By the age of 11 Cameron had a 5cm length difference between his legs and his left foot was three sizes smaller than his right.

“He could only walk with the aid of crutches and was in constant pain.

“By 14 Cameron was completely dependent on a wheelchair for getting about.

“Despite this, he still took up archery as it was one sport he could do sitting down.”

Cameron’s determination in the sport landed him several gold medals. 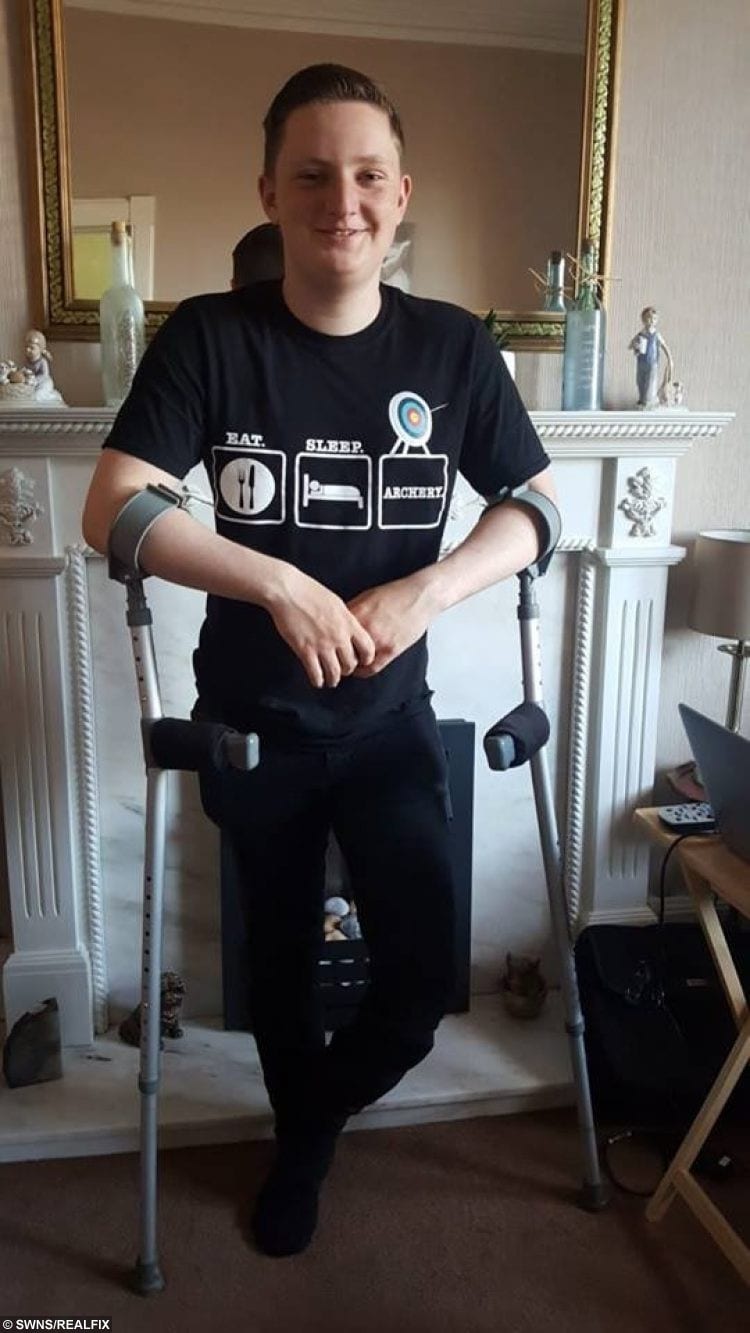 Paralympic GB has also expressed an interest in Cameron and he has to provide scores to them from his next three competitions for review.

Richard said: “Cameron has now been fitted for first prosthetic and is expected to be walking in the near future.

“This is better than any of us could imagine but it means that he will soon be shooting standing up.”