A young teacher born without a right forearm has been able to eat a meal with a knife and fork for the first time – after being fitted with a £10k bionic ‘Hero Arm’.

Vikki Smith, 25, had previously been unable to cut her own food, use anything other than a fork and struggled to do more than one task at a time.

However, after receiving a new electronic limb last Monday (15 June), she can now enjoy a meal on her own, complete her favourite past-time of cross-stitching and curl her hair without fear of burning herself.

Even her primary school kids are impressed and have described her as a ‘super teacher’ because of her new ‘robot arm’. 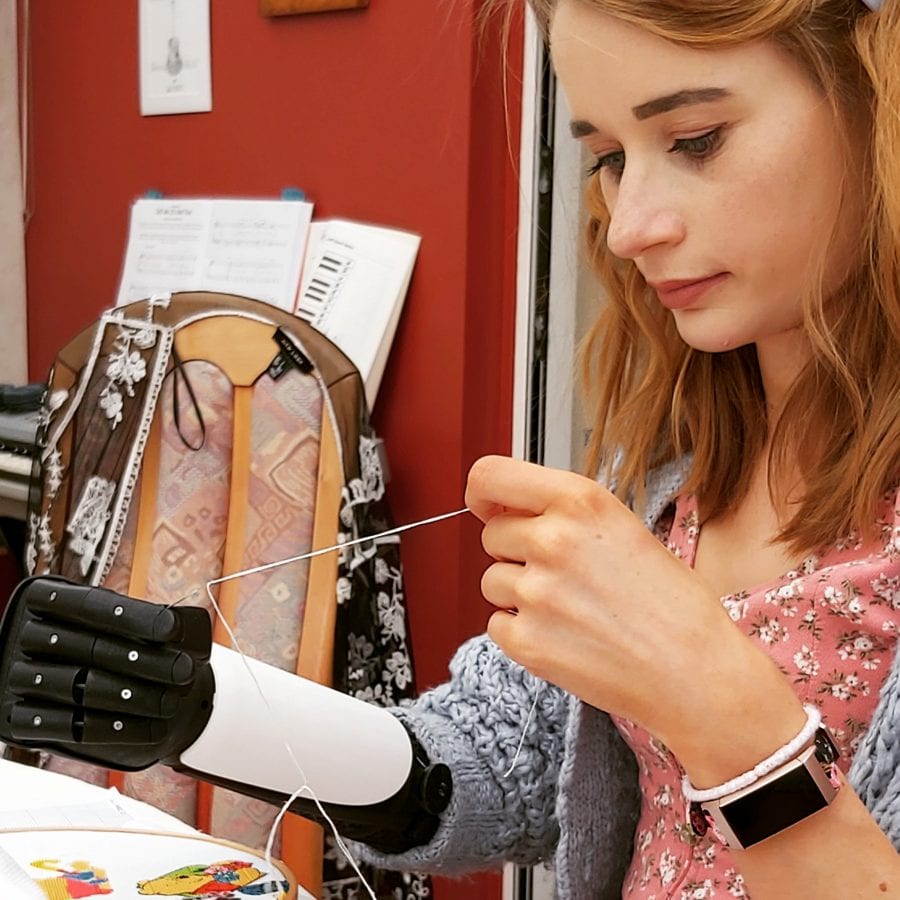 The prosthetic, which Bristol-based firm Open Bionics market as the ‘Hero Arm’, is made using a state-of-the-art 3D printer and gives amputees never before experienced dexterity.

The bionic arm works by picking up signals from muscles in the user’s residual limb.

It is the most affordable multi-grip bionic limb in the world, less than half the price of its nearest competitor.

Vikki, from Berkshire, said: “The Hero Arm is great. For the first time on Monday I was able to eat my tea with a knife and fork.

“I’ve only ever used a fork before and I was never able to cut anything. I’ve never had something so extreme.

“I felt very apprehensive at first, the Hero Arm is heavy compared to the one I was used to.

“But when I put my old one back on I missed the Hero Arm within seconds. I love it.” 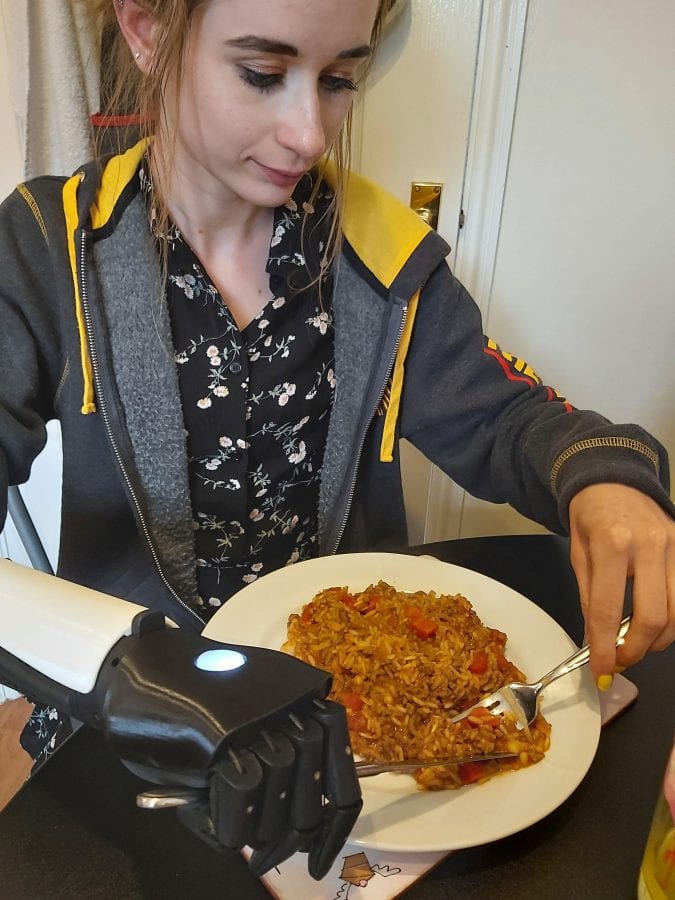 Vikki was born without a right forearm just below her elbow and has used NHS prosthetic limbs since she was as young girl.

She said: “Using a prosthetic has been normal for me since I was little – I got my first when I was only three months old.

“But my old arm was all about image – as I got older it became more about just having an arm rather than the function of it.

“This one is so different.

“Now I can do so many things all at once. I can carry cups, hold a piece of paper and write on the board at the same time.

“Instead of trying to balance books on my arm, I can actually hold them.

“I can even curl my hair easily – I’ve got a burn mark on my face from when I tried to curl my hair before and now I can do it easily.

“You can tell my new arm is bionic and different but I’m so proud of it. I want to show it off, I want people to like it.” 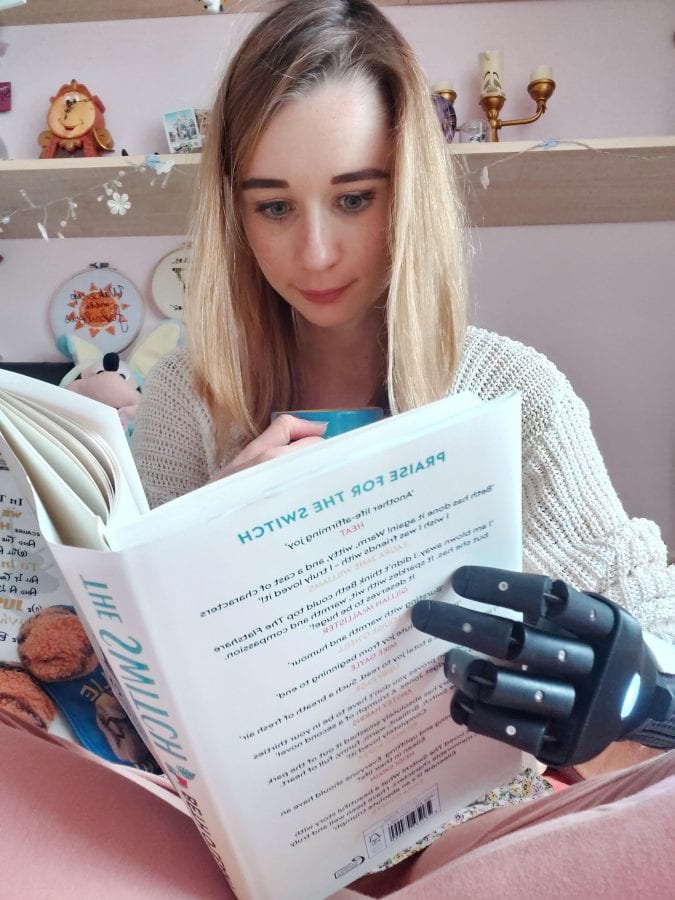 Tilly has a Hero Arm after losing both of her hands to meningitis as a little girl.

Fortunately Vikki discovered she was eligible for a funding scheme and became the first recipient of a Hero Arm donated by The Worshipful Company of Glovers – one of 110 Livery companies in the City of London.

As part of their charitable aims, “The Glovers”, are donating prosthetic hands and arms to selected applicants who have been unable to get help from the NHS or through other means.

Vikki said: “I will forever be grateful for them because they have now changed my life forever.”

The young teacher is also using her arm in the classroom to promote inclusivity among her Year Three kids.

She said: “The kids have been really funny. When I came in with it they were amazed.

“They’re always trying to get me to do things.

“They were chatting between themselves and came up with the phrase super teacher because it’s like a robot arm.

“I wanted to be an inspiration for the kids, to show every child I teach they are special and can overcome anything.

“I never walked around with my prosthetic on show but now I’ve talked about my new arm with the kids.

“If I’m confident that I’m different then if there is something different about them they can be confident about it.” 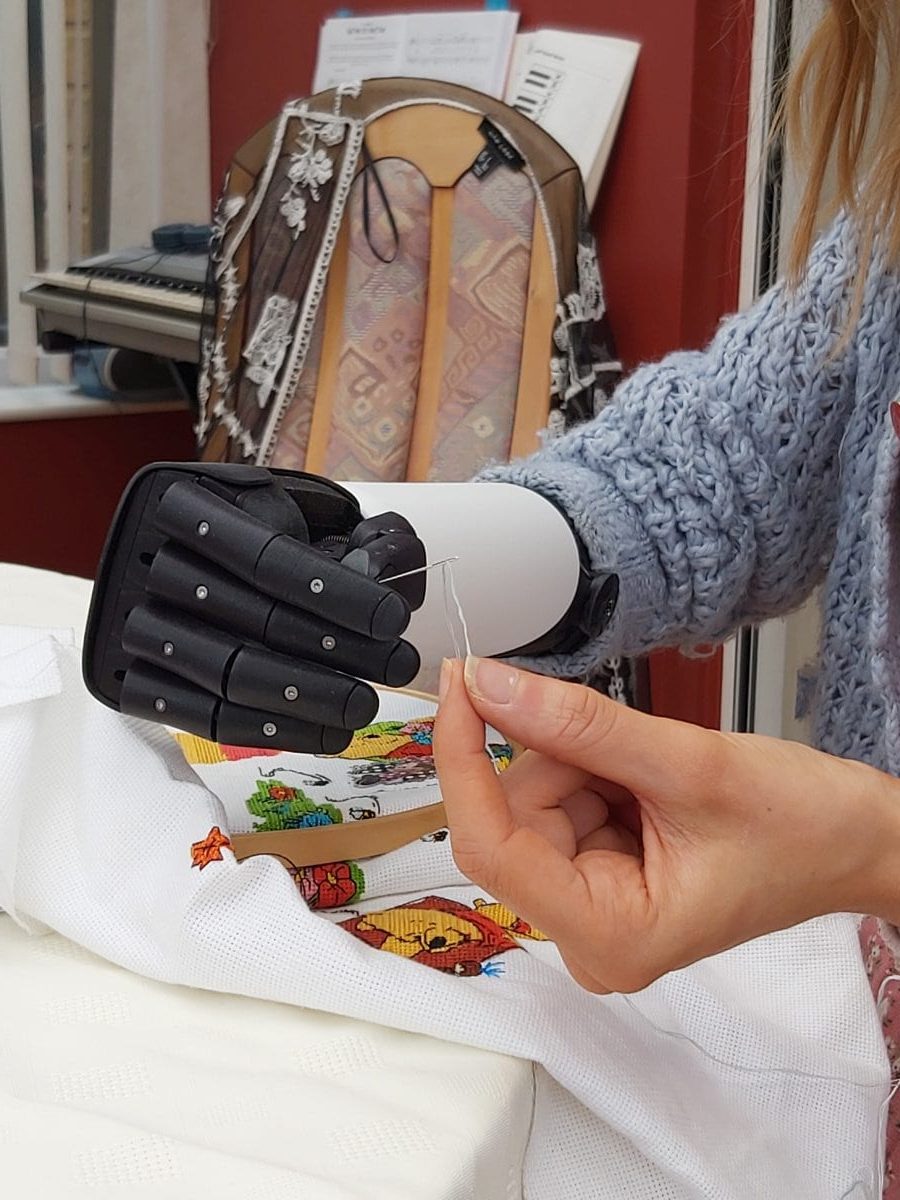 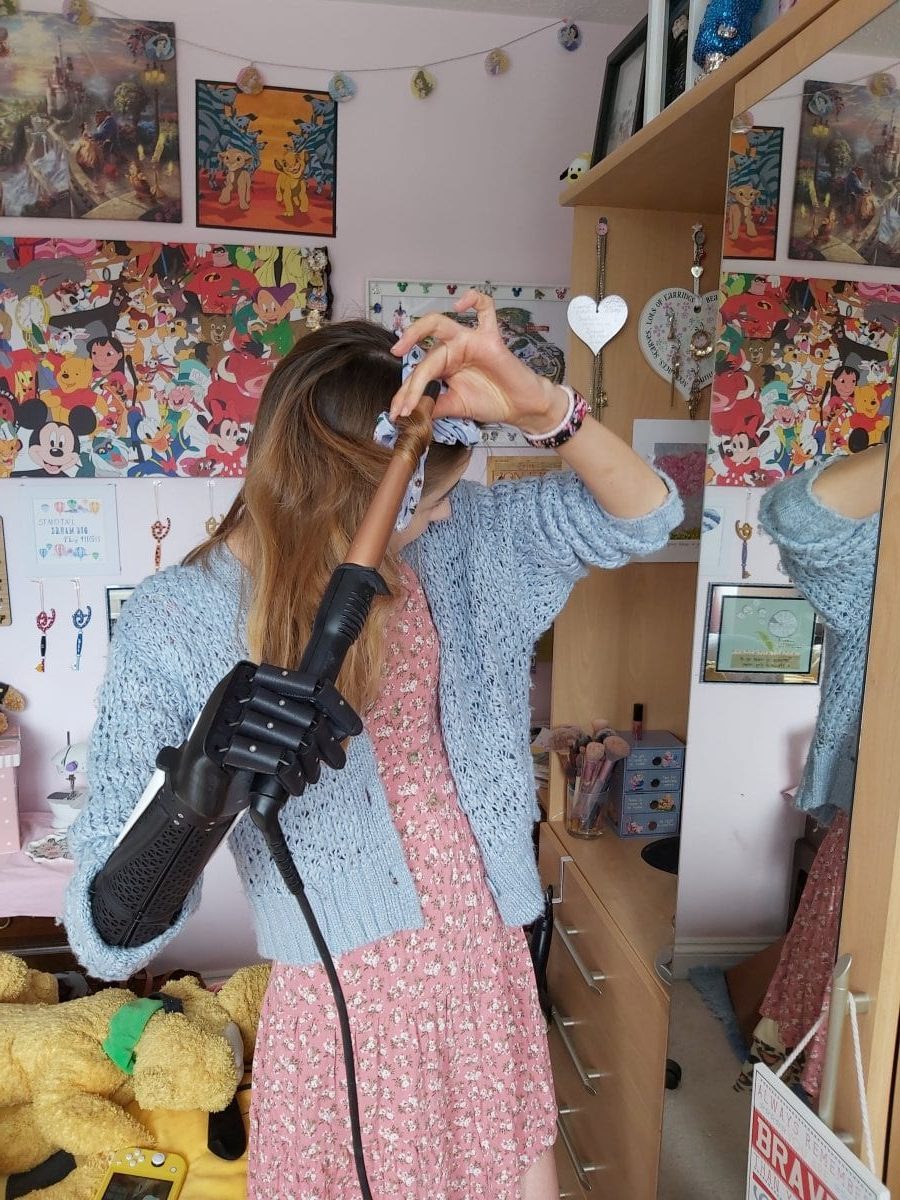 Jonathan Isaacs, the chair of the Glovers Prosthetics Working Group, said: “We chose Vikki as our first Hero Arm candidate as we recognised that it would be a life changing opportunity for her in her personal and work life.

“We recognised her ability to project positivity in overcoming difficulties and her determination to encourage inclusivity.”

The Master Glover, Mr Roger De Courcey, said: “The Worshipful Company of Glovers feel very privileged to have been involved in such a wonderful project and we hope that we might be in a position to help others in the future’.

Samantha Payne, COO and Co-Founder of Open Bionics, said: “We’re so grateful to the Worshipful Company of Glovers for funding a Hero Arm for Vikki.

“The Hero Arm is the world’s most affordable multi-grip bionic arm and manufactured at a price point that’s affordable enough for NHS healthcare.

“Until the Hero Arm is available on the NHS, there are many people in the UK crowdfunding for better prosthetic devices.

I thought I had 'fresher's flu' but It was something more sinister...and I nearly died

WATCH: This Labrador not only fetches beer for his owner but also recycles the bottles and cans when they’re empty