A photo of Philip Robson is carried into the upper atmosphere on a weather balloon which also carried the ashes of the beloved grandfather.

These breathtaking pictures capture the moment an amateur astronomer’s ashes were scattered – 32,000ft above earth on the edge of space.

Philip Robson died aged 65 and his family plotted a “fitting” farewell after his funeral.

They spent £700 building a high-tech helium balloon which would transport his ashes six miles above the Sussex countryside before bursting.

In an emotional send-off, his family and friends stood side-by-side to watch his remains vanish above the clouds.

“We looked forward to it for weeks and that was his send-off.

“There were a few tears shed but we tried to make it like a party atmosphere. It was a euphoric feeling.”

Phil, a former teacher in a special needs school, lived with Jak and their daughter Ayngie Tappin, 44, her husband Robert, 46 and their two children, nine-year-old Daisy and Letty, six, in Sayers Common, Kent.

He fought a progressive lung illness for five years before passing away on October 7 last year.

One of his final wishes before he died at the St Peter and St John’s Hospice in Lewes, was to not have a funeral.

Instead, his coffin was taken for a private cremation with no family members present.

Jak, 66, added: “He didn’t want a funeral because he didn’t want to upset the grandchildren more than he had to.

“They knew he was really ill but we all put on a brave face.

“We knew his time was limited so we tried to be as cheerful as possible.”

Phil’s family were left to do as they wish with his ashes, and a close family friend, Nathan McLaughin, came up with an idea for the ambitious galactic send off.

They needed permission from the Civil Aviation Authority and waited months for the right weather conditions, which finally came on August 3.

Stashed away in a huge hot air balloon, the ashes were scattered to the earth below as the balloon burst at the edge of the atmosphere around 15 miles away.

Whilst the high-tech balloon landed safely, around 35 miles away, a fault with its GPS tracking device meant the family were unable to track the balloon’s descent.

Unfortunately the balloon is still missing, and despite knowing roughly where the balloon landed, the family are yet to find it. 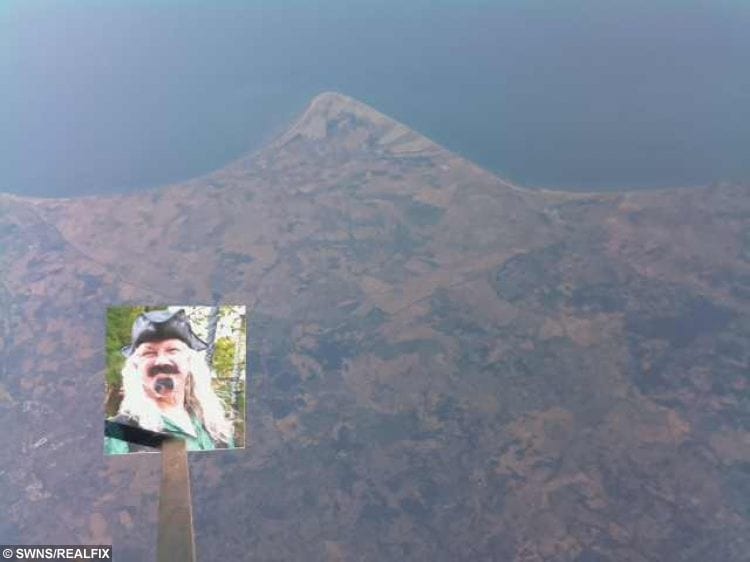 The balloon’s cameras were able to send back photographs to a laptop as the two-hour flight took place, but the breathtaking footage and recording equipment is still lost.

The family are still hopeful of being able to one day find the balloon, which cost around £700 to build.

Its precise landing location is unknown, but the balloon is thought to have landed somewhere near the B2079 near Goudhurst, Kent.

Jak is urging locals to look out for a white polystyrene box attached to a neon green and orange parachute when close by to the landing area.

She said: “We tried to follow it but lost sight of it.

“It could be anywhere, in a tree, stuck on a power cable or just laying in a field waiting to be found.

“Without the tracking equipment we have no way of finding it.

“We really want the video footage back and just hope it’s not lost.

“But we still call it success because we did what we wanted to do.”