A six-year-old has been hailed a hero for rescuing her toddler sister after their mum’s car veered off the road and crashed into an icy river.

Sophia Le Blanc was terrified when her family’s car tire hit a rut in the road – snaking terrifyingly before plunging into a river in Canada.

The first grader, of Amherst, Nova Scotia, Canada, was strapped into the back seat with her siblings Elise, two, and Ethan, four, who was knocked unconscious in the November crash.

Sophia’s mum Candice Hicks, 28, started to panic as the vehicle quickly began to fill with the river’s water, leaving her children restrained in their car seats and upside down.

Candice, a student, managed to unbuckle her seat belt despite a shattered wrist but struggled to undo the difficult restraint on Elise’s car seat.

During that panicked moment brave Sophia unbuckled her own seat belt and freed a frightened Elise from her restraint.

The six-year-old then climbed onto her mum’s back as she waded through the river and scaled the riverbank to wave down a passing car.

Sophia said: “My mummy was driving and the car started going cuckoo on the road.

“We went right down into the river.

“I was in the back seat and I was so wet. I could touch the roof.

“My mummy told me to climb the rocks and wave at a car to help us.

“I’m not allowed to talk to strangers but my mum said it was okay this time.

“We were lucky because a truck stopped and he came to help us. 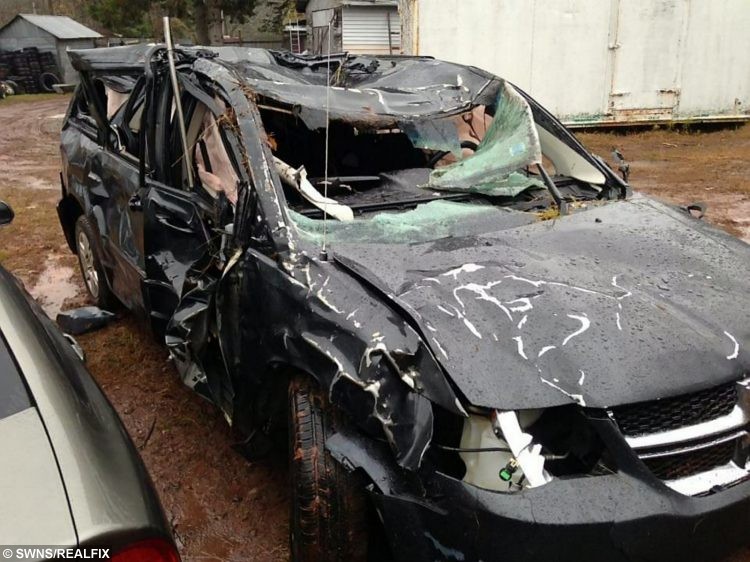 Candice said: “I thought we were going to die. I thought I wouldn’t be able to get my kids out and we would die.

“The two year old was crying and I managed to get my seat belt off, but my wrist hurt and I couldn’t do anything with it.

“Sophia was able to help her sister out of her car seat.

“My son was unconscious, he banged his head in the accident and it was terrifying.

“Nobody could see us from the road because of the drop.

“Thank God Sophia managed to wave down a car.

“I don’t know what I would have done if it was just me in the car with my two other kids.”

Sophia’s brother Ethan luckily regained consciousness after he was cut out of his seat belt and the family were rushed to hospital by ambulance.

While her children were unharmed, Candice shattered her wrist in the accident and required surgery to insert metal plates into her hand.

Sophia said: “My brother was in shock I think. He was asleep the whole time and he can’t remember anything.

“When I got back to school I had two bruises on my head and I told my teachers what happened.

“I’m just really glad it was all okay. It was a very scary day.”

Candice said: “The kids were all okay apart from a few bruises, thank God.

“It was awful lucky that someone came to help so quick.

“She wasn’t crying but I could tell she was very scared.

“But she responded so well to my directions and she was very brave.”

While Sophia is thrilled with her award, the first grader does not foresee a career in emergency response.

“I was very excited when I got the award and my mummy says she will hang it up in my room soon.

“I don’t want to drive an ambulance when I grow up. I want to be a babysitter.”