Do you think this mum should have been fined?

Fay Riley, 39 with baby Ollie of Leek, Staffs. See Ross Parry copy RPYPARKING. A mother has been fined Ã100 for pulling over in a 90p-an-hour car park to feed her screaming son. Frantic Fay Riley, 39, stopped momentarily to give baby Olly a bottle of milk, only for him to be sick all over himself and his sister Daisy. She managed to pull off 16 minutes later without realising she needed to pay - only to be sent a ticket two weeks later. Fay, of Leek, Staffs., said it was the most expensive milk she'd ever given to her son, and appealed the Ã60 fine from the Pleasureland car park in Morecambe, Lancs.

A mother has been fined £100 for pulling over in a 90p-an-hour car park to feed her screaming son.

Frantic Fay Riley, 39, stopped momentarily to give baby Ollie a bottle of milk, only for him to be sick all over himself and his sister Daisy.

She managed to pull off 16 minutes later without realising she needed to pay – only to be sent a ticket two weeks later.

Fay, of Leek, Staffs., said it was the most expensive milk she’d ever given to her son, and appealed the £60 fine from the Pleasureland car park in Morecambe, Lancs.

“Talk about Pleasureland car park, there was no pleasure in it for me.

“I was planning on parking in there for the whole day but my children and our car were covered in vomit so we had to leave to go and get sorted out.

“I didn’t see any signs while I was there and because we hadn’t even left the car, I didn’t think about getting out and putting money in a machine.

“They charge 90p an hour to park there so really the only money I owe them is about 20p for the time we were there. I will happily pay them that.”

Sadly Waitrose worker Fay lost her appeal but was astonished when ParkingEye, who issued the ticket, then demanded £100 instead of the £60 they first asked for.

“Not only have they taken advantage of me, but they’re now penalising me for trying to stand up for myself.

“I asked them to look at my situation, and they’ve just had a complete lack of compassion for my situation.”

“There must be parents in that office who can empathise with what I was going through, and as they run the car park via CCTV, they will know that I didn’t just abandon my car and walk off.

“I think it’s disgusting that they can treat people in this way, knowing that most people will just pay the fine for fear of a bailiff turning up at their front door.”

Fay, who is married to technical manager Dean, 41, had been visiting her parents in Morecambe, Lancs., with 19-month-old Ollie and daughter Daisy, three, when she was captured on the car park’s CCTV.

She was unaware of the fact until a parking penalty notice landed on her doorstep some three weeks later.

However after returning to the seaside town last week, she went back to the car park to investigate the strict parking rules.

Fay said: “I went back and looked for signs and I did find them eventually – they were high up in the air on lampposts in tiny writing.

“Any mother will know that if you have screaming children in the back of the car you’re not looking up into the sky to see if you can pull over.

“They need to make it clearer if they’re going to rely on making a profit from parents like me who might not realise this is how they will be treated.

“It’s a pure money making scheme and I just wish they had some decency to realise it was a genuine mistake.” 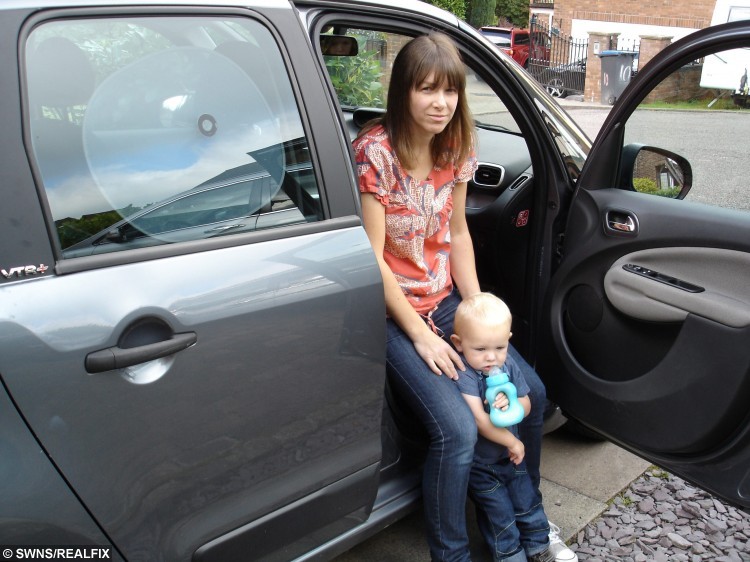 Other people who have been slapped with tickets by the fierce firm include a representative of a dance school, a tradesmen who helps with restoration work and a volunteer who was left “in tears” after receiving her £100 parking fine.

On Facebook, Captain Sparkle said: “I run a taxi and my driver, while out working, got a ticket at 00.55 in the morning after being on the car park for 12 minutes.

“I have appealed, but haven’t heard anything for weeks.”

Andy Drew, from Lancaster, Lancs., who received a ticket for offloading car boot items for an hour, said: “The system is a joke and I’m appealing.”

JET Ltd who own the car park did not wish to comment.

Mum-to-be announces her pregnancy after IVF battle in the most AMAZING way!

Success for the ‘paedophile hunters’ as child sex offender is jailed

Success for the 'paedophile hunters' as child sex offender is jailed