Susan Eakins with her son Mason, amongst some of the goods they have collected for the Atherton whose home burnt down. See Ross Parry copy RPYMOG : A family whose house was destroyed by a fire have become the real-life stars of festive advert 'Mog' - after neighbours rallied round to save Christmas. Heroic Megan Atherton, 12, bravely saved her parents and five siblings after she saw flames coming from a first-floor bedroom as they had a weekend lie-in. But, after the blaze left them with nothing, strangers and neighbours offered donations of clothing, toys and money to help them - in scenes almost identical to the Sainsbury's Christmas advert. Teary-eyed dad Roy, 48, said: "It's unbelievable. For complete strangers who have never met us to come together and do this - IÃm lost for words. "We are really, really happy and so grateful that people are rallying together even though they don't know us.

A family whose house was destroyed by a fire have become the real-life stars of festive advert ‘Mog’ – after neighbours rallied round to save Christmas.

Heroic Megan Atherton, 12, bravely saved her parents and five siblings after she saw flames coming from a first-floor bedroom as they had a weekend lie-in.

But, after the blaze left them with nothing, strangers and neighbours offered donations of clothing, toys and money to help them – in scenes almost identical to the Sainsbury’s Christmas advert.

Teary-eyed dad Roy, 48, said: “It’s unbelievable. For complete strangers who have never met us to come together and do this – I’m lost for words.

“We are really, really happy and so grateful that people are rallying together even though they don’t know us.

“It’s overwhelming and we’re so thankful.” 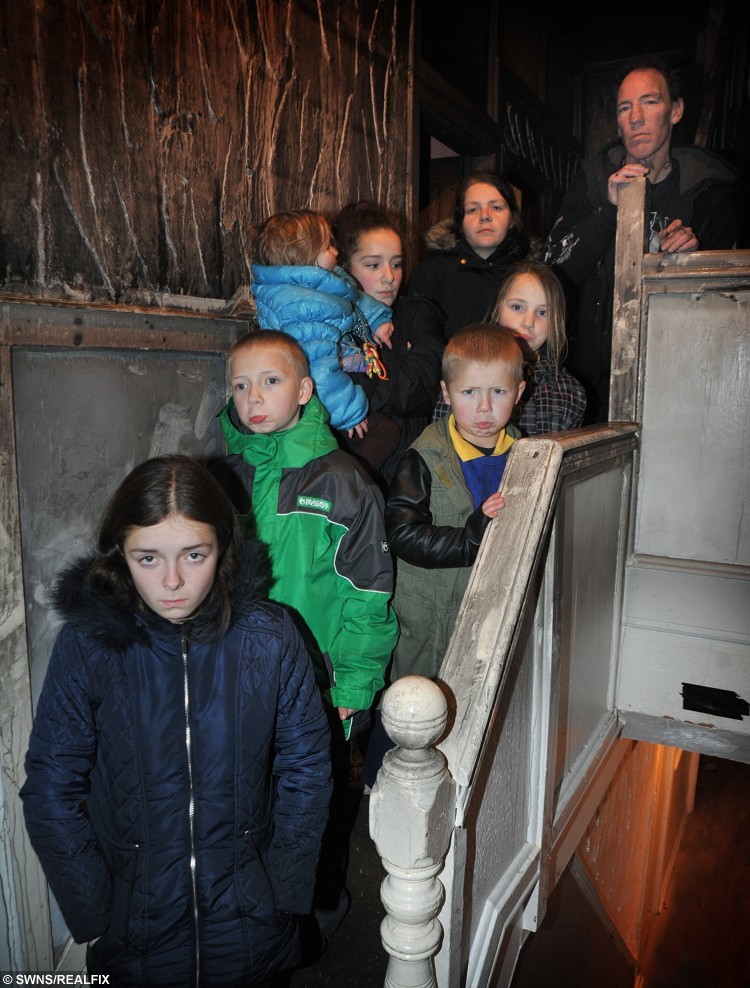 In the heartwarming Sainsbury’s 2015 Christmas ad, the Thomas family are left homeless just before Christmas when a fire started by family cat Mog destroyed their home.

But in true festive spirit, friends and neighbours gave them a Christmas to remember by offering anything they could to get the family back on their feet.

Mum Lisa, 38, described the family as being “overjoyed” by the support, after they were even offered a place to stay over the holidays.

She said: “It’s always been our dream to move here and we finally did it. We’ve been waiting nine years and now it’s gone up in smoke, literally.

“The house was supposed to be a new start for us and now it’s gone.

“There will be no Christmas for us. All our plans have been ruined.”

The devastating blaze broke out in the family’s home in Blackpool, Lancs., at around 10am on Saturday, leaving the property completely gutted.

The family also tragically lost their pet hamster Squeak in the inferno alongside their clothes and possessions.

But Lisa and husband Roy, 48, along with kids Shannon, 14, Tessa, eight, Peter, nine, Ryan, six, and Helena, two, have Megan to thank for getting them out safely – wearing only their pyjamas.

Megan said: “When I saw the fire my whole body just froze and I couldn’t think of anything.

“Then my brain just clicked and I remembered something I had learned from the fire brigade in school about what to do if we ever saw a fire.

“They told us to make sure everyone in the house was awake, and to go around the rooms to check everyone is out before leaving all together.

“So I just shouted and whistled as loud as I could.”

Megan gathered her siblings together on the landing before rushing them out of the house while a neighbour called the fire brigade.

She then went into the living room where her parents Lisa and Roy were sleeping to wake them.

Lisa, a full-time carer for son Peter said: “We usually have a sleep-in at the weekends, especially the kids as they’re usually tired from school.

“Me and my husband were sleeping in the living room because we have only just moved in and are decorating the bedroom.

“The next thing I knew Megan burst in shouting, ‘Dad there’s a fire’.”

“Roy jumped up and told me to grab a pan of water. I ran upstairs but I was breathing in smoke and coughing. When I saw the flames covering the bed I just ran.”

The family, still wearing their pyjamas, took shelter at a neighbour’s house while fire crews battled to save their home.

But when word got round that nothing could be saved from the family home, local people got together to do what they could to help the Atherton’s, who are currently staying in a hostel.

Sam Griffiths, 30, who has set up an online donation page for the family, said: “I saw the Atherton’s story and felt compelled to help out.

“For a family with young children to have nothing at Christmas – no home and no presents – is terrible.

“I’ve set up a Just Giving page and I’m taking donations of clothing, toys and anything else people can donate to help the Athertons get back on their feet.”

Susan Eakins, 23, is putting together gift boxes for each of the children with the help of friends.

She said: “I make a Christmas box every year for one boy and one girl but I decided to help the family after I read about them.

“I wouldn’t like to see my child suffer like that. I think it’s lovely that everyone is coming together.”

Other neighbours have planned a bike ride to raise money for the Atherton’s Christmas, and they hope that anything left can go towards a deposit on their new home.

Kind-hearted Cheryl Johnson, 44, has even offered to let them stay in her home while they get back on their feet.

Cheryl said: “I don’t like children being homeless, especially this time of year.

“Over the last few years I’ve had health issues, lost family members and now run the fund-raising team for Guide Dogs in Preston and Leyland.

“I see how charity helps in different ways to different walks of life. If you can help others then do it. It doesn’t cost anything except time and compassion.”

To support the family, visit: crowdfunding.justgiving.com/athertonxmas