A social media temptress is making $30,000-a-year – by posting photos of her FEET on Instagram.

Gweneth Lee, 49, rakes in around $2,500 a month snapping pictures of her perfectly pampered feet and sharing them on social media.

Certain fans also ask Gweneth to meet up in real life, and they fork out up to $300 an hour to massage, lick and take pleasure from her feet.

In total, she claims she makes around $30,000 a year in donations and business created by her Instagram page.

“I would always post pictures of my feet by the pool and it got a huge following.

“I ended up creating a new Instagram just for people who love my feet.

“I have some men who will pay me to massage my feet for an hour. They’ll lick my feet, and they love playing with feet.”

The widow, who spends her time jetting around the world, hit headlines earlier this year after revealing she hooked up

with 100 married men through the site.

She is regularly wined and dined by strangers, but also found a way to cash in online after her adoring Instagram followers began requesting pictures of her feet.

It inspired her to set up an Instagram page, @gwenethsfeet, devoted solely to feeding the popular fetish, and she now has 1,340 followers.

Gweneth, who has lived in London and is from San Diego, California, spends an hour a day pampering her feet for photoshoots and posting the pictures to her feed.

What makes her feet so attractive, Gweneth believes, is that they are “well maintained, with straight toes, a higher arch and small ankles”.

She said: “You have to drink two to three liters of water a day to keep the skin on your feet beautiful and your cuticles hydrated.

“I use foot cream on my heels and my feet three times a day, and I tend to always have socks on or shoes just to protect them.

“I wear toe separator when I go to the gym or I go running, which is what my acupuncturist thinks is healthier for the longevity of my feet.

“I also eat a lot of fresh fish because the fish oil hydrates your cuticles.”

Gweneth, whose oil executive husband Robert passed away in 2000, gets her monthly pedicure paid for by her followers and usually opts for a red shellac polish.

She said her clients range from surgeons to bankers to businessmen, but they all have one thing in common – an affinity for feet.

She said: “I tend to get a high caliber clientele. They’re educated, and they’re good family men.

“People with foot fetishes in general tend to be quite gentle people. It’s not a hardcore fetish.

“I think it’s no different than men who love lingerie. They just love to see their partner dressed up in beautiful stockings, and some men love shoes.

“It’s usually the businessman who’s sitting around all day, and he’s got a wife and three kids to care for.

The foot model, who charges $300 per hour session, often receives elaborate gifts in exchange for her foot-modelling shots. 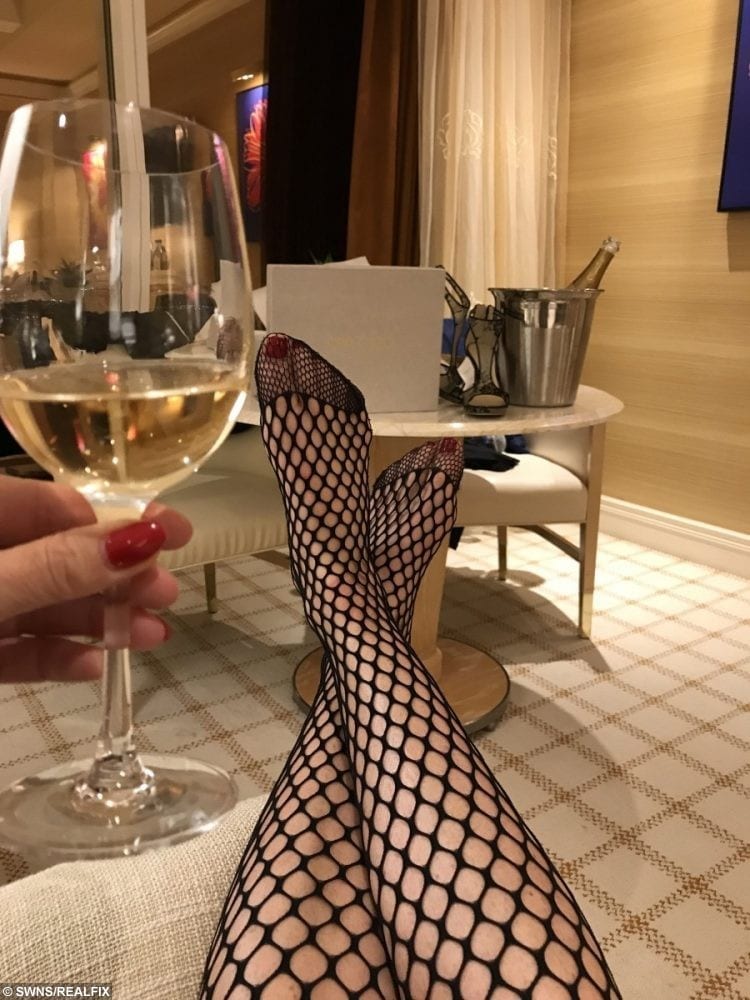 She has also been flown out to hotels around the world including in Palm Springs, New York City and London.

“One lovely client, who is a wine lover, gives me these bottles of wine that are sometimes worth $500 each.

“I’ve received jewelry, and I’ve got a gift certificate for a facial at a beautiful hotel, like the St. Regis or the Four Seasons, which has got to be several hundred dollars.”

“Everybody has something they love, and some people just love feet.”