WWI plane restored by grandsons of pilot at £100,000 cost- and flying again

A First World War plane flown by a real-life ‘Biggles’ has been lovingly restored by its pilot’s grandsons at a cost of £100,000 – and has FLOWN again.

The Bristol Scout biplane, serial number 1264, was used by flight Sub-Lieutenant Frances ‘Bunnie’ Bremner between 1914 and 1918.

He returned from serving with the Royal Naval Air Service in Gallipoli and always told his family he would like to see the aircraft take to the skies once again.

His plane has now been returned to full working order by brothers David and Rick Bremner, who found its remains in their granddad’s shed when he died in 1983.

They spent more than a decade of hard graft and £100,000 successfully honouring their grandfather’s wish to get ‘1264’ airborne.

Along with friend and amateur pilot Theo Willford, they scoured the globe for parts and even went to New Zealand to find an engine that would complete the aircraft.

David, 65, revealed the successful completion of the journey as the plane was put on show at RNAS Culdrose for its annual Air Day today – where Bunnie was once based.

He said: “We grew up less than ten miles from my grandfather so we heard all his war stories.

“After he died we found three souvenirs in his workshop; a stick, rudder bar and magneto, and we guessed that these were from his plane.

“Then in 2002, our friend Theo Willford suggested we rebuild 1264 and the research started.

The trio spent a staggering 10,000 hours building the plane, which has a wingspan of 24ft and is 20ft in length, from scratch.

It is now the only flyable Bristol Scout Type-C anywhere in the world.

David, who works as a mechanical engineer and is chairman of the British Microlight Aircraft Association, said he believed his grandfather would be proud.

He said: “Although he talked about flying a lot he had never mentioned keeping these parts before.

“We had the parts for years and had the idea in the back of our minds that one day we would try to rebuild the plane.

“But it was Theo who actually got us to make a start.

“We started researching what the plane would look like and because the parts don’t exist anymore we had to plan what replacements we could still get now.

“The three original bits we had only probably made up about two per cent of the whole thing, so there was so much left to do.

“The only thing we didn’t make ourselves was the engine, which we got from a New Zealand-based company and it’s is an actual 1917 engine in a beautiful condition.”

“Bunnie’ flew with No. 2 Wing RNAS from December 1915 to August 1916, at Imbros, off the Gallipoli peninsula, and at Thasos, a Greek island off the coast of Bulgaria, which at the time had recently joined the Axis powers.

In all he flew ten different types of aircraft, but his favourite was the Bristol Scout, so named because of its reconnaissance role in the fledgling RNAS.

The Bristol Scout was also the first aircraft to take off from a moving deck and served with the RNAS in the Eastern Mediterranean and with the Royal Flying Corps on the Western Front.

Rick, 63, added: “It’s been a huge privilege to be part of this fantastic project. 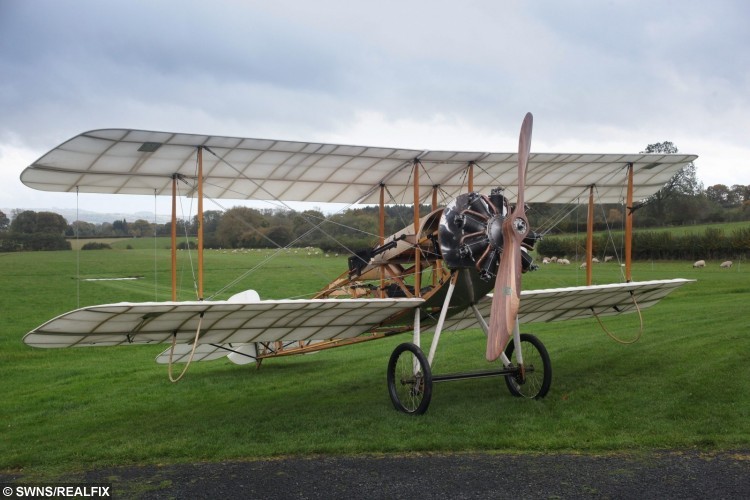 “We all just wish my granddad was here to answer many of the questions we have about ‘1264’, because he could have told us straight away.

“However, we got there in the end.

“It’s been a long old labour of love and a fitting tribute to my granddad and other British pilots who battled so valiantly for us during the Great War.”