Margaret Bowler. A grieving mum has slammed a callous council which slapped her with a Ã164 fine for turning up late to her son's burial. See NTI story NTIFUNERAL. Margaret Bowler, 78, and 260 mourners arrived 35 minutes late to lay Peter Bowler to rest after his funeral overran because so many people wanted to pay tribute to him. The 43-year-old, from Carlton Hill, Notts., died last month after losing his battle with a rare muscle-wasting disease called myotonic dystrophy. Peter's funeral service was held at 12.15pm on August 29 at St Paul's Church in Carlton, Notts., before the cortege made its way to Carlton Cemetery - half a mile away. It arrived 35 minutes late for the 1.30pm burial and Gedling Borough Council said the delay meant extra staff had to be provided as cover for another funeral at nearby Redhill Cemetery. After the funeral Margaret - who set up the national Myotonic Dystrophy Support Group in 1985 after Peter's diagnosis - was shocked to hear the council was demanding money from the bereaved.

A grieving mum has slammed callous council bosses after she was slapped with a £164 fine for turning up late – to her son’s FUNERAL.

Margaret Bowler, 78, and 260 mourners arrived 35 minutes late to lay Peter Bowler to rest after his service overran because so many people wanted to pay tribute to him.

Peter’s funeral service was held at 12.15pm on August 29 at St Paul’s Church in Carlton, Notts., before the cortege made its way to Carlton Cemetery – half a mile away.

They arrived at 2.05pm for the burial and Gedling Borough Council said the delay meant extra staff had to be provided to cover another funeral at nearby Redhill Cemetery.

But a week later heartbroken Margaret was stunned to be told insensitive town hall chiefs were demanding money for the delay their procession had caused.

She says: “I heard from about the charge from my funeral director when I went to settle up with them.

“I’ve contacted my MP who asked the council to reconsider but they said they were standing by the charge.

“I knew it was going to be a little longer than the time we booked it but I didn’t know about any penalties for being late.”

Margaret – who set up the national Myotonic Dystrophy Support Group in 1985 after Peter’s diagnosis – said the money would take away vital funds for her charity. 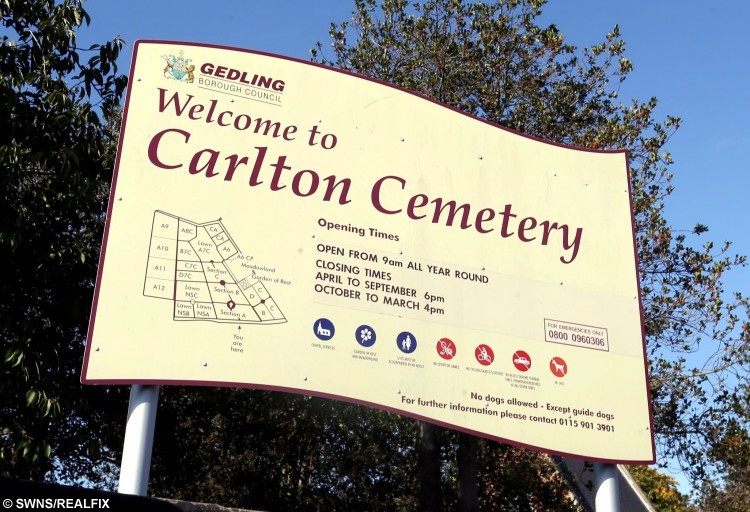 She added: “I know that Peter would say that it’s only money. But it is the principle that is wrong. I’ve not paid it yet because I don’t think it is fair.

“It’s just another added extra we weren’t expecting. The council said there were four members of staff who had to stay late. But I’m sure they don’t get paid £40 an hour.

“The irony of it all is Peter was never late for anything.”

Elycia Ormandy, family friend and founding member of the support group with Peter and Margaret, also spoke at the funeral.

She said: “This bill has marred the grieving process, which doesn’t stop after the funeral.”

The funeral director which catered for Peter’s service has also criticised the council’s decision.

Nigel Lymn Rose, managing director of AW Lymn, said: “There is no way the family should have to speed up their service and I think giving them a punitive charge if they go over is just wrong.

“On this occasion the service began at 12.15pm. But there still has to be a bit of flexibility. Funerals are an imprecise science.

“I can understand if they asked us to cover overtime for staff, which would be more like £30, but I don’t see where they get this punitive figure from.

“I’ve never had a family complain if we’ve had to wait a few minutes for another funeral to finish.

“But if you cut a service short, the family would feel a loss in addition to the bereavement.”

A spokeswoman for Gedling Borough Council said: “There was another funeral at Redhill Cemetery that afternoon, which extra staff had to attend as a result of this late arrival.

“We allow 30 minutes grace past the requested booked funeral time but beyond this there is a standard charge made to the funeral director, in this case, A W Lymn, as it is their responsibility to run the funeral on time.

“Since January 2015 we have carried out 275 funerals and had to apply this charge three times.”