This heart-stopping footage shows the moment a cyclist comes within inches of being crushed to death by an oncoming train.

In the footage, a man in a checkered shirt and shorts is seen to open the gate at a level-crossing while the cyclist wearing a black hooded top walks through.

After missing the first train coming through from the left of the shot he almost walks straight into a Northern Rail service coming from the right.

Luckily the cyclist jumps back from the path of the train and carries his bike back through the crossing gate in at Ducketts crossing in Pudsey, Leeds, West Yorks. 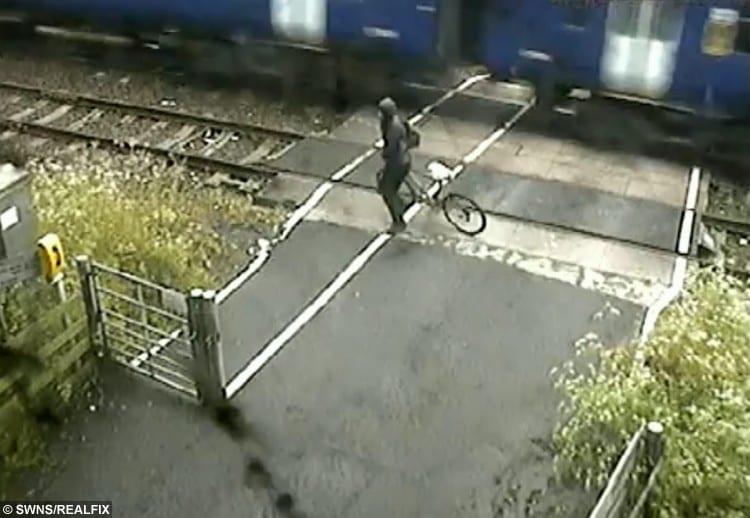 The footage was shot during the summer but has only just been released to highlight the risks of using level crossings.

In the past 18 months there have been 18 incidents at Ducketts crossing.

These incidents have seen phones at the junction being left off the hook and the gates being left open as well as the near miss.

The delays at Ducketts crossing has cost the taxpayer £14,260 and resulted in over 12 hours of delays for passengers.

Vicki Beadle, community safety manager at Network Rail, said: “We are investing more than £100m to improve level crossing safety across Britain, but we also need everyone who uses level crossings to do their bit too.

“We cannot stress enough the danger cyclists, pedestrians and motorists are placing themselves in when they don’t observe the safety warnings.

“When a cyclist approaches a level crossing, they should dismount their bike and check that no trains are coming from both directions before they cross.

“The footage shows just how close this cyclist came to being struck, and most likely killed by the train.

“People need to realise how a split second decision to ignore safety procedures can have life changing consequences, not only for themselves, but also for their family and friends.

“These type of incidents also affect train drivers and railway workers, who have to deal with the aftermath.” 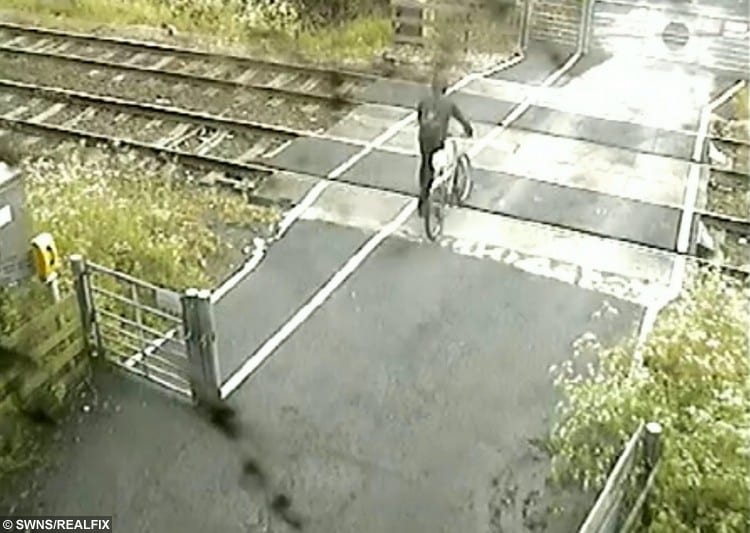 Chief Inspector Lorna McEwan for British Transport Police (BTP), said: “This cyclist was one of the lucky ones.

“Sadly there are many people who have not been as fortunate, and I have had the heart breaking job of telling families that their loved ones has been killed at crossings or on the tracks.

“Despite our constant warnings about using crossings safely and the dangers of the railway, incredibly some people are still willing to put their lives on the line by ignoring crossing instructions, not looking properly or by trying to dash across crossings when trains are approaching.

“Most accidents are as a result of impatience; not being prepared to wait and trying to beat the train.

“People risk their lives thinking it won’t happen to me, but it can and it does and it’s simply not worth the risk.”