Angharad Bullock, 38, and her husband Loric, 22, photographed at home in Swansea, Wales. See SWNS story SWTOYBOY; A British mum who got pregnant by her teenage Jamaican toyboy says their relationship is the "real deal" - even though he gets mistaken for her daughter's BOYFRIEND. Telesales worker Angharad, 38, fell head over heels for Loric, then 19, after a friend set them up and they started chatting over Blackberry Messenger. After six months of talking on Skype, the mum went on a three-week holiday to Jamaica to meet her mysterious lover in the flesh - and fell pregnant with his child. Just weeks later, after saying "I love you", Loric proposed via text - and Angharad said yes, so that he could secure a permanent visa to stay in the UK.

Meet the most unusual family unit in Britain … A 38-year-old mum and her Jamaican toyboy husband – who is often mistaken for her teenage DAUGHTER’s boyfriend.

Telesales worker Angharad Lovering, 38, met baby-faced Loric Bullock on Blackberry Messenger when he was just 19 and they fell in love while chatting over Skype.

She then jetted out to Jamaica to meet him in the flesh – and fell pregnant with his child during the three-week holiday.

Just weeks later Loric proposed via text – and Angharad said yes so he could secure a visa to stay in the UK.

After tying the knot, they now live together in Cardiff with their son Tyrese, now one, and Angharad’s daughter from a previous relationship, Daisy, 15.

But people often mistake Loric for Daisy’s boyfriend – and are shocked when they discover he is in fact her STEPFATHER.

Angharad said: “A lot of people confuse him for her boyfriend.

“I don’t look as old as I am and I certainly don’t dress my age because I don’t want to look my age. I don’t have wrinkles so I’m lucky.

“But Loric has a baby face. A couple of people have said to my daughter, ‘Is that your boyfriend?’ and she has to say, ‘No, it’s my stepfather.’

“I keep a very small circle of friends and I don’t really get on with my family so I don’t give a damn what they think.”

Angharad and Loric, now 22, first started talking when she took Daisy – whose father is Jamaican – over to the country to meet her grandparents in 2012.

“While I was there I met some guy and through that I got talking to Loric on Blackberry Messenger,” said Angharad.

“I didn’t think anything would come of it because he was really young – he looked about 12 in his picture.

“He looked like a baby, but we just kept chatting and got on really well.”

When Angharad got back to the UK, she and Loric embarked on transatlantic courtship over Skype, texts and voice messages.

Six months later Angharad went on a three-week holiday to Portmore, Jamaica, so that they could finally meet in real life.

“I was desperate to go and meet him,” she said. “We spent almost three weeks and we just had a lot of fun.

“I thought he would just be nice to chat to but we completely fell for each other. We got on really well and then he said ‘I love you’.

“When I got home and found out I was pregnant we saw it as a sign that we were meant to be.”

Loric proposed to Angharad via text just weeks later and, despite having only met once, she said yes – and took out a loan to pay for a £3,000 temporary visa for her new fiance.

In October 2013 she gave birth to their baby boy, Tyrese – with a doctor holding her hand and Loric 5,000 miles away on the end of the phone.

It was not until March 2014, when Tyrese was five months old, that Loric got his visa and could fly to the UK to meet his son for the first time – and his fiancee for the second.

“All we had had was three amazing weeks together and a million phone calls, but actually we didn’t really know each other at all,” said Angharad.

“When he finally got here, he became a father and we had no time together. Our whirlwind romance was now a reality.

“We didn’t realise how much we didn’t know about each other and we were tiptoeing around each other, but then we started getting to know one another as a family.”

Despite barely knowing each other, the couple wed two months later so that Loric could secure a UK visa, which will last him for two-and-a-half years.

They tied the knot in a £250 register office ceremony on May 31 2014, where Angharad wore a £20 dress from eBay. They celebrated at a pub reception with a handful of friends and family.

But despite now being married for more than a year, Angharad said she is still getting to know the father of her child, who is 16 years her junior.

Angharad said the transition has been difficult for Loric, who has battled racism and found it difficult to find a job, as well as facing prejudice about the age difference.

Despite everything, she said she would not change it for the world.

“A lot of the issues we have had are also because he has come from living at home with his family and he has never had responsibilities. He has had a lot to learn,” she said.

“I have always gone out with older men, but then I hit my mid-20s and started getting a lot of attention from younger guys. I think we are calmer and more accepting.

“I have never lived with a man before so it is really new for both of us.

“It has also been difficult for Daisy, because Loric wanted to be her friend and he got a little bit too close with her friends, and it has been a real struggle for him to find work.

“People hate immigrants, but Loric came here as a father and a lover and has done honest work to fit in, in a small town in the valleys that barely has a black face in it.

“I paid his way to get here, getting a loan and working extra hours in my telesales job, but it was worth it.

“It’s been a tough time, but I’m finally getting to know the husband I met on Skype.” 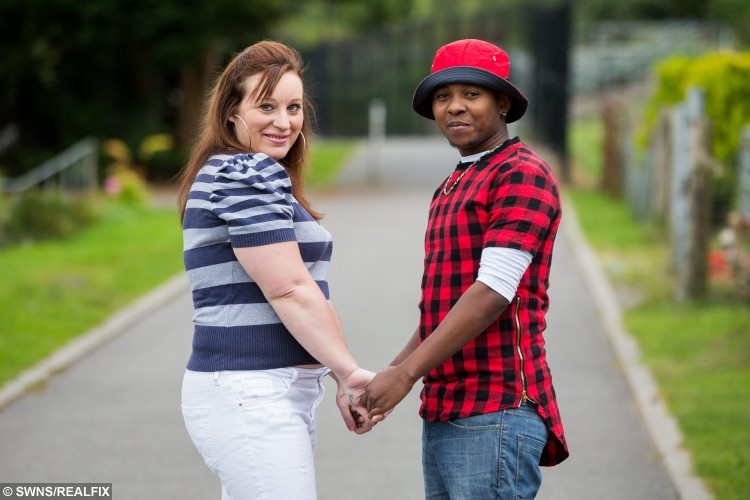