Blindfolded British Muslim teen asks; ‘I trust you. Do you trust me? Give me a hug.’

Yusf Pirot gives hugs to people in Nottingham. A muslim teenager is offering up hugs with passers-by in a busy city centre to try to improve the public perception of his religion. See NTI story NTIHUGS. Muslim teenager Yusf Pirot handed out free hugs in Nottingham yesterday in an attempt to banish stereotypes surrounding Islam. The 16-year-old, of Arnold, Nottingham stood blindfolded in St Peter's Gate with a poster saying, "I am a Muslim, not a terrorist". The Bluecoat Beechdale Academy pupil said: "The stereotype is not right and these extremists are brainwashed Ã what they're doing is not what Islam is about."

A British Muslim teenager has become an internet sensation after a video of him offering free HUGS in the wake of the Paris terror attacks attracted over 2.1 million views.

Yusef Pirot, 16, stood blindfolded in the middle of Nottingham city centre for two hours with a sign around his neck saying: “I trust you. Do you trust me? Give me a hug.”

Heart-warming footage shows strangers approaching the youngster in their droves to take him up on the offer and embrace him in the middle of the street.

The Kurdish schoolboy then uploaded the video of the touching gesture to social media where it has gone viral with millions of views.

Yusef, of Arnold, Nottingham, said he conducted the social experiment in a bid to stem the tide of anti-Islamic feeling following the Paris atrocity.

He added: “I wanted to combat the stereotype about my religion and prove that not all Muslims are terrorists. We want peace.

“I was shocked by the Paris attacks – why would anyone want to hurt another human being and why would they kill innocent people for no reason?

“The stereotype is not right and these extremists are brainwashed – what they’re doing is not what Islam is about.

“I grew up in a society where I was being called a terrorist nearly every day.

“I saw a similar video online of a man doing the same in Paris but I don’t think anyone has tried this in Britain.

“I stood in the city centre for about two hours and over 100 people gave me a hug.

“There were businessmen, groups of girls, old ladies, black, white and Asian people. A real mix. I was amazed at the reaction.

“I thought of the idea a long time ago, and I think it’s important to send this message out.”

“There are 1.7 billion of us in the world that doesn’t mean that every single one of us is a terrorist.”

“Some brainwashed people think it is OK to go and blow themselves up; not all Muslims think the same way.

“I was really shocked and surprised it went viral. I thought it would be a normal video and not a big deal.

“When I was blindfolded I heard a few people saying negative things – one person said to his friend what would happen if I punched him in the face?

“But most of the reaction was massively positive and I think all religions need to unite in these difficult times we now face.”

Yusef, a sixth form pupil at Bluecoat Beechdale Academy, in Bilborough, Nottingham, arrived with his family from northern Iraq in 2007. 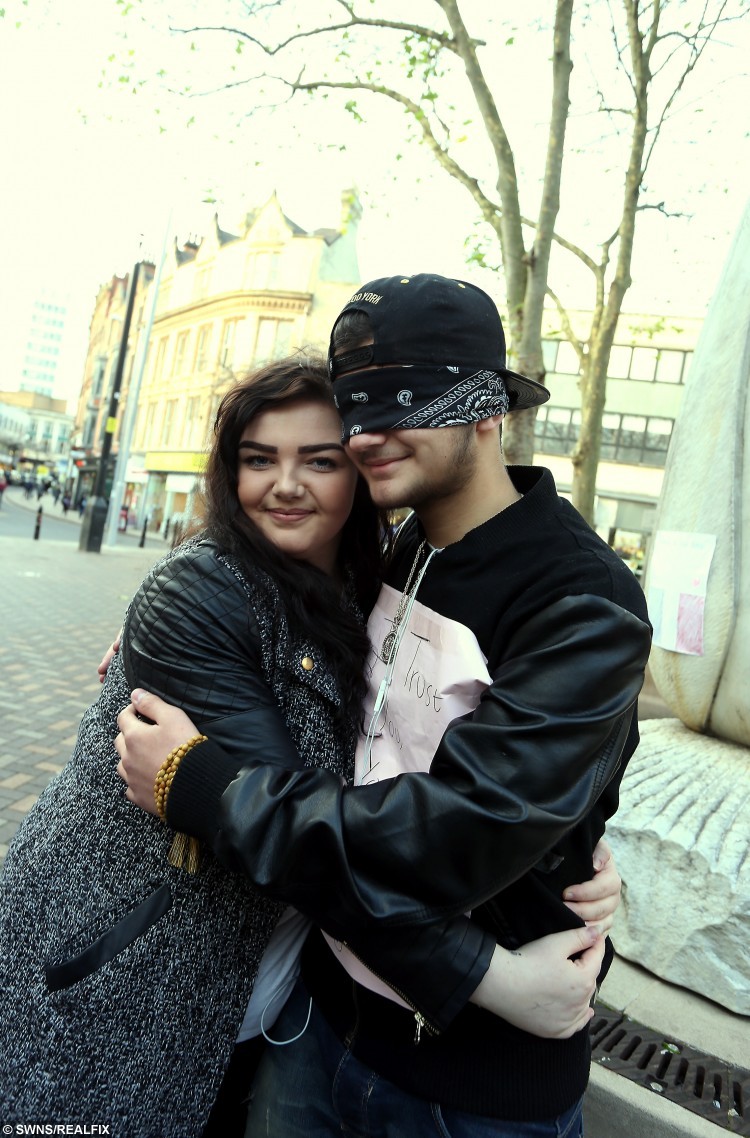 In his video, dozens of people can be seen walking up to the teenager and giving him a hug as he stood with arms outstretched in St Peters Gate last Monday (16/11).

The footage has accumulated over 2.1 million views and almost 50,000 likes after being shared by the popular Facebook page The Lad Bible.

Wendy Feargrieve of Calverton, Notts., who stopped to give Yusf a hug, said: “He was blindfolded and he couldn’t see who was going up to him and what they were going to do.

“I walked up to him and he put his arms around me and I told him he was very brave to do what he was doing.”

Village comes together in anger over despicable act of vandalism