An elderly couple who met in the hallway of their retirement home have tied the knot after a three-month whirlwind romance.

Their paths crossed when Jim, a retired chemical engineer, moved into an apartment in Millcroft Senior Living, where Nancy was already a resident.

Jim sadly lost his wife Patricia Sample in January 2018 and Nancy, a retired secretary, became widowed when her husband Mike Klein died in 2016 after 64 years of marriage. 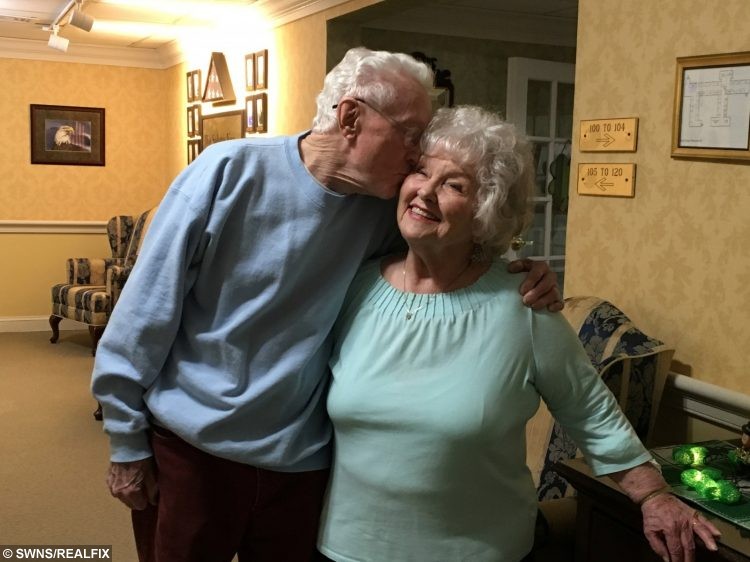 The pair quickly became friends but romance blossomed when Jim invited his crush to join him at a lunch and Nancy reciprocated by inviting him to her grandson’s 40th birthday bash.

They enjoyed their time together so much they began to talk about marriage and decided to wed in October in a small ceremony attended by two close friends.

Jim said: “My wife Patricia sadly died last January. She had dementia for some years before she passed away. We were married for more than 50 years.

“I made the decision to move to Millcroft after her death.

“The first day I moved into Millcroft I met Nancy in the hallway. I was with my daughters and my granddaughter.

“She was a lovely lady and she had a beautiful smile.

“It was gradual. We just got to talking. Her apartment was right around the corner from mine, and I would meet her sometimes as she made her way to dinner or an activity.

“Some of my old friends invited me for a catch up lunch and I asked Nancy if she wanted to come along. That was kind of our first date.

“A few weeks later she invited me to her grandson’s 40th birthday party where I met a chunk of her family.

“We would meet up for drinks at happy hour sometimes and come over to my apartment for drinks.

“In September I had the idea of getting married and I asked her what she thought of it.

“I didn’t propose exactly and I certainly didn’t get down on one knee.

“It was a beautiful day.”

“He’s not bad looking either.

“When he asked me to lunch, it was nice to have a date. I had a nice time and his friends were such great people.

“We play bridge together. We play bingo too even though that is definitely not Jim’s game of choice.

“We are more alike than we think. We really like each other a lot and we have a lot of fun.

“Jim has just good morals and we both have these big families.

“We started talking about it and we decided we wanted a small wedding.

“I knew I couldn’t pick and choose between our kids without feelings getting hurt. That’s why we just did it with a couple of friends.

“We got married in St Elizabeth Ann Seton chapel on October 26.”

Nancy wed her first husband Mike Klein, a chemical engineer, in 1952, but said her October wedding was much more low-key.

Nancy said: “At my first wedding I was 21 and I had bridal showers and an announcement in the paper. I wore a beautiful big dress and there were so many flowers.

“I looked through my closet on my wedding day this time around and just found something I liked. I chose black slacks and Jim wore a suit.

“My wedding to Jim was much more laid back.

“I’ve been very lucky to have had married two wonderful men in my life.”

Jim and Nancy married on October 26 last year and marked the occasion with two celebrations, one with their friends at Millcroft and a family brunch in late November.

Granddad-of-15 Jim and Nancy, who has 11 grandchildren, said their age has a lot to do with the super speedy pace of their relationship.

Nancy added: “We get along really well. We don’t have the same worries we did when we were younger people who were worrying about family and bills.

“I’m not lonesome anymore. I mean I had adjusted after my late husband’s death and I was okay but it is nice to be with Jim now.”

“We want to spend a few years together and enjoy our lives together while we can.

“Nancy is gorgeous! I don’t know any 88-year-old woman who is as beautiful as she is.

“Nancy and I were both married for more than 50 years and we missed the companionship that came with that.

“We’re lucky to have found love together at this age.”