Dad-to-be enlists the help of his unborn child to pop the question!

Naomi Allen's painted body bump - with the surprise proposal. See SWNS story SWMARRY; A dad-to-be enlisted help from his unborn baby to ask the love of his life to marry him. Steven Moyle made the surprise romantic gesture to his girlfriend of nearly five years Naomi Allen. Ostensibly as a treat to her, Mr Moyle, 32, arranged for body-painting artist Carrie Preston to pop around to the couple's new Truro home to paint Miss Allen's baby bump. Miss Allen, who works at Holland & Barrett in Truro, said they had discussed the painting and she at first thought it was nothing more than a nice surprise.

A dad-to-be enlisted the help of his unborn child to ask his girlfriend to marry him – by secretly painting ‘will you marry me?’ on her baby bump.

Steven Moyle, 32, made the surprise romantic gesture to his girlfriend, Naomi Allen, 28, by hiring a professional body painter to come and paint the message.

Steven tricked Naomi by pretending they were having a present with a label, including the baby’s name, Esmae, painted on Naomi’s stomach.

But when Naomi looked in the mirror she was shocked to see the surprise message, and turned to see Steven on one knee, ring in hand.

Little did Naomi know that several family members were hiding in the house in Truro, Cornwall, and had to be stalled while the painting was completed.

After a brief pause Naomi said yes, and the family emerged to celebrate with the newly engaged couple.

Naomi said: “We decided to go for a present with a label, the baby’s name, Esmae, and her estimated date of arrival, which is November 14.

“The artist was there for a couple of hours and, as she finished, Steve got the mirror and said take a look.

“It took me a couple of seconds to work out what it said.”

“At first I thought it was a mistake when I turned around, because my stomach is quite big I only saw the word ‘will’ and thought, ‘oh no she has got the name wrong’, then I leant back and realised.

“When I turned around he was on one knee with the ring – obviously I said yes.

“I was surprised. It was really lovely, really nice. He definitely did me proud. It’s the most romantic thing he has ever done.

“I don’t think I will ever forget that moment.” 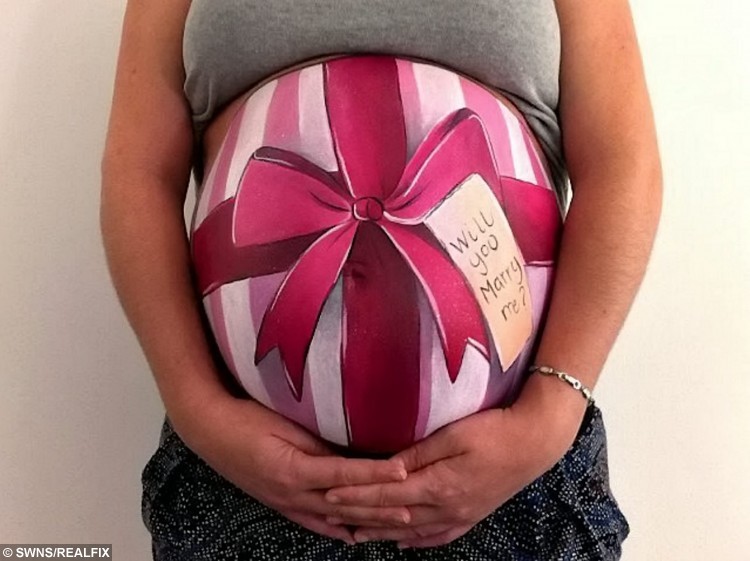 The couple are now planning their wedding, but are yet to set a date.

The painting was done by Carrie Preston, owner of baby bump painting business My Little Sweet-pea.

Over four years she has painted more than 200 women but has never had such a request before.

She said: “It was a lot of fun. She looked in the mirror and then turned around and he was on one knee with the ring in a box – it was really cute.”

Use the fork! Gravity-defying wedding cake created with some Cornish magic

Use the fork! Gravity-defying wedding cake created with some Cornish magic