HomeMust ReadRelationships‘Even The Silliest Things You Do Can Change Your Life Forever’ – Trans-Atlantic Couple Thought To Be The First To Meet, Date & Marry Through TikTok 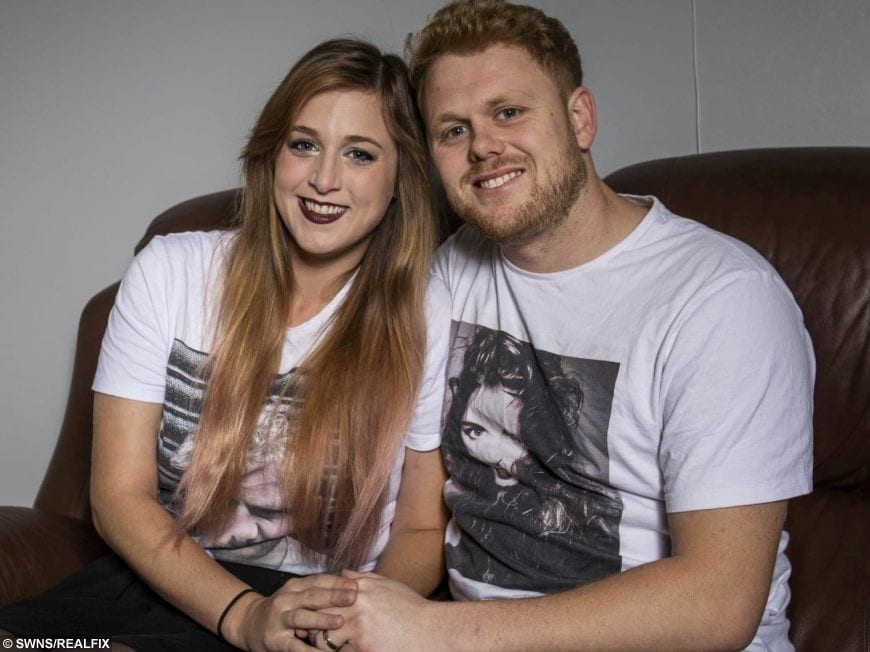 Meet the trans-atlantic couple thought to be the first to meet, date and marry through social media app TikTok.

Sarah and Daniel Hancock decided to tie the knot in a whirlwind Las Vegas ceremony just EIGHT MONTHS after meeting each other through the musical meme app – which allows users to create and share short videos with special effects.

Daniel, 26, first followed his future wife after downloading the app last July and seeing Sarah coming up as a suggested account to follow.

After Sarah, 27, returned the follow just 10 minutes later, she invited her new social media pal to take part in a duet of Ed Sheeran’s Shape of You.

Just minutes after performing, the pair messaged one another via private message before moving across platforms to Instagram to communicate.

The pair started talking on Instagram and within two weeks of knowing each other Sarah booked tickets from Boston, US, to London Heathrow to see her crush.

She then extended her stay by an extra four days after “falling head over heels in love” with the 26-year-old from Weston-super-Mare, North Somerset.

Over the next six months the pair wracked up four trips to and fro the Atlantic before Daniel proposed at Castle Island, Boston, US on in March.

The next time the pair met was four weeks later at their wedding in Las Vegas, where they walked down the isle at a Las Vegas chapel to officially become man and wife.

Now after three months later – and thought to be the first couple to marry  as a married couple the pair are now living in the UK, while Sarah waits for her permanent visa.

Sarah said: “I just found him incredibly funny and thought to myself ‘I have got to meet this guy’.

“We were bonding over the songs we liked to sing to and the kind of movies we liked.

“We did a tonne of other duets together on the app.

“We did a Jonas Brothers duet, scenes from Bruce Almighty as that’s one of Dan’s favourite films and even did Frank Sinitra’s ‘New York’ when we were there.

“And if we weren’t doing that we were just chatting away to one another.”

“That was a good few years ago. Then for some reason I had this urge to download it again and go back on it.

“I’m so grateful I did otherwise I may never have met Sarah.

“She popped up as a suggestion.

“I checked out her profile and I found her videos really silly and funny.

“I saw that she had over a thousand followers.

“Obviously I thought she was attractive but there was nothing untoward when I followed her account.

“I couldn’t believe someone that cool wanted to follow me back.”

After speaking every day for the next two weeks, a love-struck Sarah booked £XX flight to London Heathrow where the pair spent eleven days visiting tourist sites.

Daniel said: “When I saw her in the flesh it just felt incredible.

“I’m glad she actually came and didn’t turn out to be a middle-aged man or something.”

Sarah added: “When I was flying back it was like that thing you see in films where you just want to jump off the plane and run back to that person.

“After that we would video call every day.

“We just couldn’t really get enough of each other.”

The pair continued to talk every day and would take it in turns to visit each side of the Atlantic for the next eight months.

But after just meeting one another just FIVE times, Dan decided to pop to the question to Sarah, filming his proposal for his TikTok followers at Castle Island, Boston, US.

The pair had four weeks to plan their wedding, spending a humble £2,000 on venue hire, a wedding dress and their flights to Las Vegas.

As a nod to how they first met, the couple danced to Ed Sheeran for their first dance as a married couple.

The happy-couple then spent the next eleven days touring LA, Chicago and Boston as an immediate honeymoon.

Dan said: “I remember walking down the street on one of our visits and I turned to Sarah said ‘You know, I’m going to marry you some day’.

“It was a joke but the more I thought about it when I was away from her, the more I realised I meant it.

“I bought a ring and flew it over to there.

“I thought it was only right that we film it and put it on TikTok as that’s where it all began.

“It’s actually quite weird because that’s where the Americans went to get away from the English back in the day.

“And I was there as an Englishman asking an American to be with me forever.

“We shared the footage with our followers and we’ve had such a positive response.

“We’ve had other couples get in touch saying they’ve met the same way.

“The support we’ve had are really quite remarkable.”

The pair wed in a Las Vegas chapel – with a humble seven guests – just EIGHT months after meeting on the social media app.

Now after four months as man and wife, the pair are currently residing in Weston-super-Mare with Sarah on a temporary three-month visa.

Sarah said: “We just wanted to share our love story.

“The app is usually associated with kids mucking around and people sharing funny videos.

“We’ve both used Tinder and dating apps before.

“But we both used this app innocently.

“We were on it to just have fun and mix with people who shared the same love of music and goofing around.

“But we managed to find the loves of our lives.

“It turns out even the silliest things you do can change your life forever.

“We now have a joint following. There have been people coming forward saying they’ve got with their partner too.”