Heidi Dodds helps her brother Eric get in to a wedding dress to prank her groom Val Zherelyev.

This is the moment a trickster donned a white dress to prank his brother-in-law who was waiting to see his bride for the first time ahead of their wedding ceremony.

Eric Dodds, 30, cooked up the trick with his sister Heidi Zherelyev, 25, to help ease her groom Val’s nerves on the big day.

Val Zherelyev, 26, was waiting to see Heidi for the first time before they renewed their vows on the grounds of The Gathering Place, in Brenham, Texas.

Val, of Tempe, Arizona, heard soft footsteps approaching and turned around expecting to see Heidi only to lay eyes on her Eric clad in a white gown instead.

Eric, a brewery chef, was asked by Heidi to climb into her pal’s old wedding dress for the prank on June 30.

Eric: “I found out about this plan a few hours before the ceremony and I thought it was such a great idea.

“I love my sister and would do anything for her and I love my brother-in-law. She picked such a good guy.

“He was such a sweaty mess I knew it would be a good way to calm his jitters.

“I really got into the role. I put on girl’s perfume and deodorant to get into character.

“When he turned around it was hilarious. We messed around and had a little photo shoot of our own.” 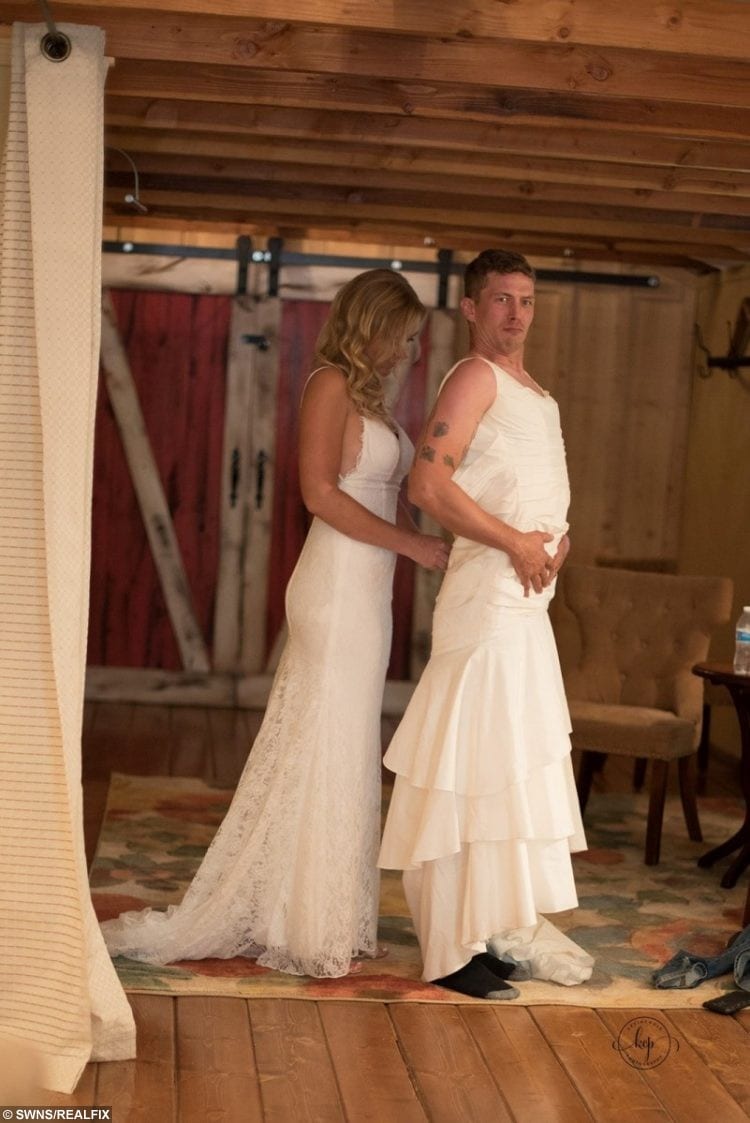 Val added: “I was so nervous and anxious but excited to see Heidi.

“I was just standing there waiting when I heard the gentlest footsteps behind me.

“I felt the softest touch on my shoulder. I had the biggest smile on my face when I turned around.

“When I saw Eric in his dress, it took me a few moments to process it.

“It definitely made all my nerves go out the window.” 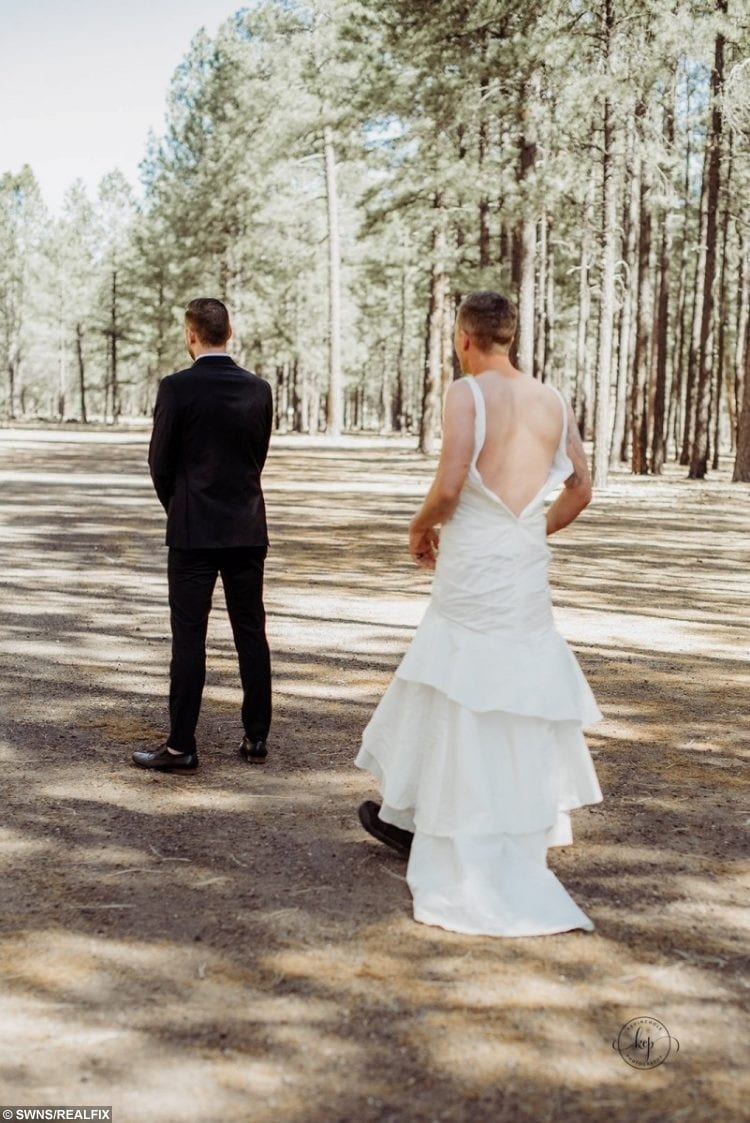 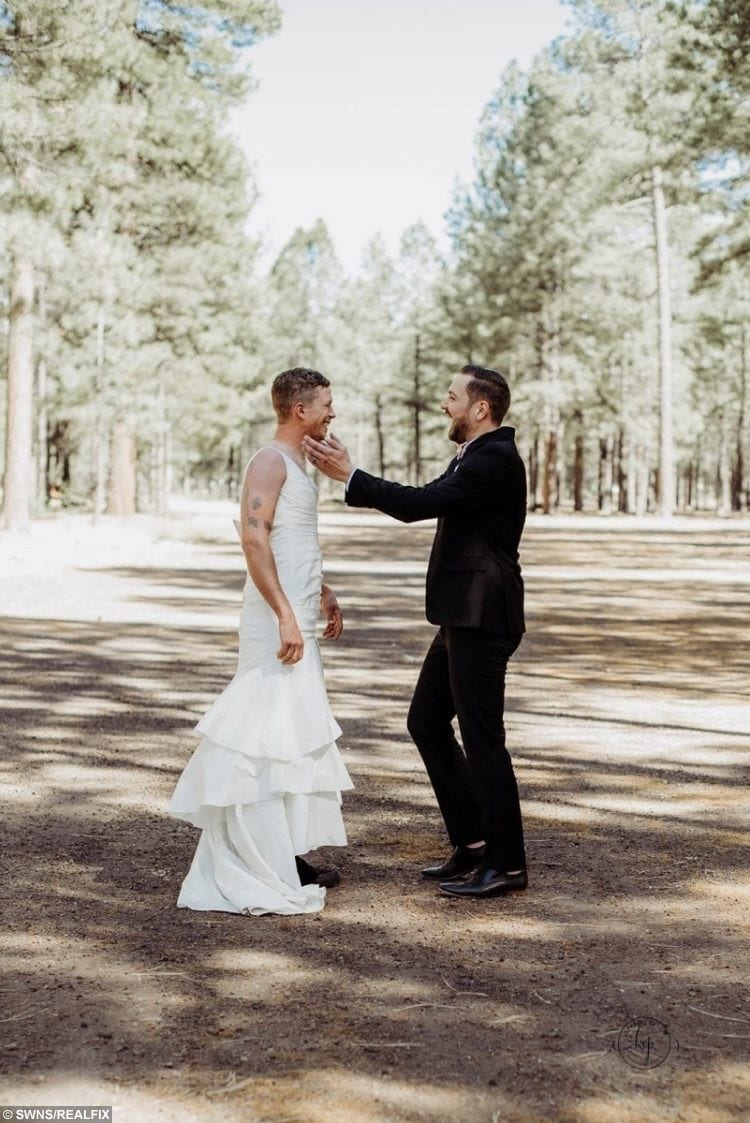 Heidi, a health sciences graduate, and Val, a navy veteran, met on the first day of their freshman year at high school and eloped in San Diego in 2013.

The pair wed without friends or family but felt like they missed out on the opportunity to have their dream wedding.

Heidi knew her husband would be nervous about exchanging vows in front of their 67 guests, which inspired her hilarious plan.

Heidi said: “My friend and I came up with the idea about five months before the wedding.

“Chelsea had her old wedding dress we could use and I knew my brother would be on board.

“He has known Val for about ten years now and they are like brothers at this point.

“I was watching everything from the window of the bridal suite.

“I was trying so hard to be quiet but I couldn’t.

“It was just too funny.

“I’m so glad we have it all caught all in photos. “ 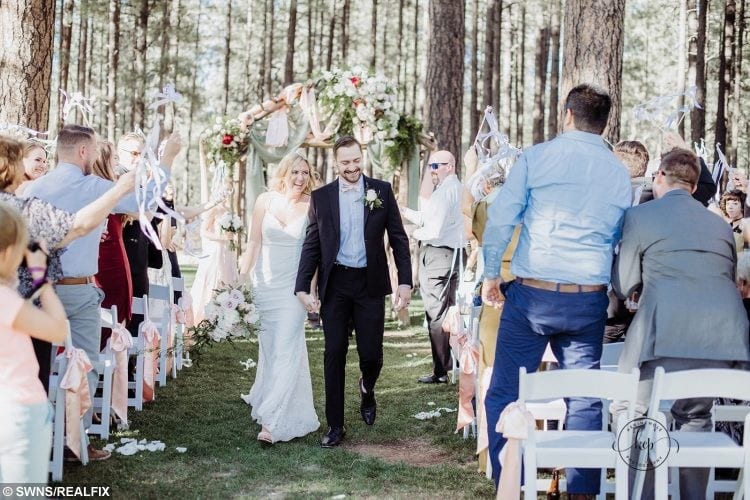 Photographer Nichole Clien said the moment was a pleasure to capture on camera and had the desired effect on nervous Val.

“The groom’s reaction was priceless. I love photographing that first moment, it’s usually such raw emotion so to twist it like this was really funny.”

Val added: “It was so funny and it set a precedent for the whole day.”

Although Eric was happy to get into the wedding dress to ease Val’s nerves, he changed into a second outfit ahead of the ceremony.