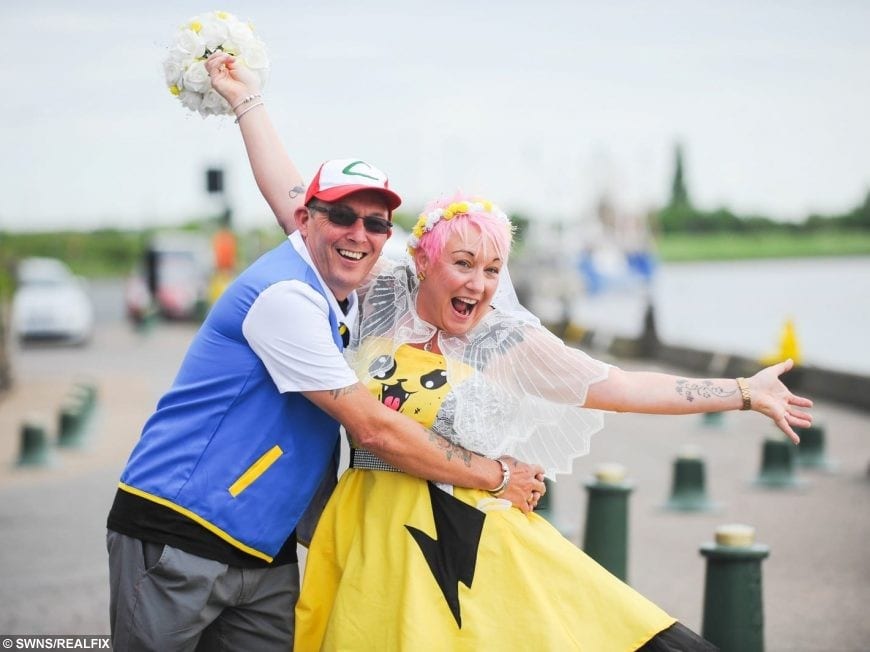 A British couple tied the knot in a Pokemon-themed wedding.

Steve, 57, and Sharon Griffin, 48, decided to theme their entire wedding around the popular Japanese anime franchise.

Steve dressed as popular main character Ash Ketchum and Sharon as the bright yellow mascot Pickachu for their nuptials.

They were also were joined by Squirtle and Charmander for their service on Thursday.

Sharon from King’s Lynn, Norfolk, said: “It was an amazing day, it was just really fun. We were laughing all the time.

“For us it was making the day fun for everyone else.”

The couple even opted for Pokémon-themed vows – but in the end decided to chose traditional ones.

Sharon’s “obsession” started when she was looking after her nephews and they would play the Pokémon game on their phone.

After getting involved, she felt that she really enjoyed the game.

She said: “My husband isn’t into it.

“It is me who is, my nephews have grown up now but haven’t.”

Sharon and Steve, who have been together for 16 years, got married yesterda at registry office in King’s Lynn.

Sharon said she asked her husband for a Pokémon wedding but he said “no”.

She adds: “We have been together for 16 years but just never got around to the wedding.

“I said to husband why don’t we have a Pokémon wedding. He said absolutely not – which made me more determined.

“It wasn’t until he walked in and saw me making the outfits, he thought this is real.

“He only got his wedding outfit last week. He just thought in for a penny out for a pound.”

The guest at the wedding ceremony had different Pokémon masks to wear for when Sharon walked down the aisle – including the celebrant.

Sharon also laid Pokémon figures on the tables at the wedding reception and had a themed hunt for the children.

Alice Stockdale, 19, bridesmaid of honour and Sharons daughter, said: “It was a lot of fun. I’m not so much of a Pokémon fan, I played Pokémon Go, but the family are massive fans.”

Pokémon, also known as Pocket Monsters in Japan, is a media franchise managed by The Pokémon Company.