Mike Wakefield's romantic beach proposal to India Stevens. See SWNS story SWBEACH. A man from Newquay has shocked his wife-to-be with 30ft sand art proposal on the beach. Mike Wakefield only decided the night before he was going to ask nurse India Stevens to marry him in that way and spent nearly two hours working on the art after getting the whole family in on the plan. They are now planning a beach wedding.

A beach-lover shocked his bride-to-be with a 30ft artistic proposal – in the SAND.

Creative Mike Wakefield spent nearly two hours with a rake preparing his impressive creation after deciding the night to go ahead only the night before.

He had to wait until the tide was out and arranged for his partner India to walk past the beach with her parents just after he had finished his piece of sand art.

The words Will You Marry Me were written in a circle while the art work sprawled for a further 30ft by 15ft – making it visible from a long way out from the scene in their home town of Newquay, Cornwall.

Stunned India Stevens, 29, who works as a nurse was left in tears after spotting the message and realising it was meant for her – and replied with her own written “YES” in the sand.

She said: “We have been together for a long time but it was still a massive surprise.

“My mum rang me the day before asking if I wanted to go for a walk with her to the doctors in the morning.

“We did not even get to the beach when I saw Mike, who was supposed to be at work.

“I then looked at the sand and saw the proposal and asked Mike if he had done it.

“He is really creative so I knew it was him. He then got down on one knee and asked me to marry him.

“Mike has loads of hidden talents. He has never done sand art before, but he can turn his hand to anything.

“I was shocked and I did have a tear in my eye. It was quite emotional.

“I was amazed at the effort he had gone to, but I knew when he eventually proposed he would do something like this.

“I know he spent one hour and 45 minutes working on it. He said he would have kept going and just making it bigger until I arrived.

“I am so excited. We are definitely going to have a beach wedding.”

Mike, 29, who works as a plumber and wedding photographer, said he had been sitting on the idea for a while, but had to wait for several factors to come together.

He said: “We are both big beach-lovers so I could think of no better place to propose.

“The hardest part was the timing as I had to work with the tides, work shifts and the weather to try to get everything matched up.

“I had been checking the tides for a couple of months but each time it was right, she was at work or the weather was bad.

“Last Sunday night I decided to go for it the next morning so I went over to see her parents and asked for their permission and their help.”

Mike said it was the first time he had ever attempted sand art – but was thrilled with the response he received. It was left in situ for around six hours until the tide washed it away.

He said: “The only thing I had planned on doing was starting with a big circle in the middle where I would write proposal and then did it a bit at a time.

“I just made up each bit as I went along with sun beams, tentacles and spirals etc.

“I could tell India was shocked but I know she loved it.

“I was confident she would say yes but I was still really nervous.

“Most people who have seen it have said how incredible the art was. Some even thought I had paid someone to do it.”

“It was the first time I had done anything like it and I really enjoyed doing it.

“We moved to Cornwall to be by the beach, so it is only fitting we got engaged and plan to get married there.”

Read about another AMAZING proposal here! 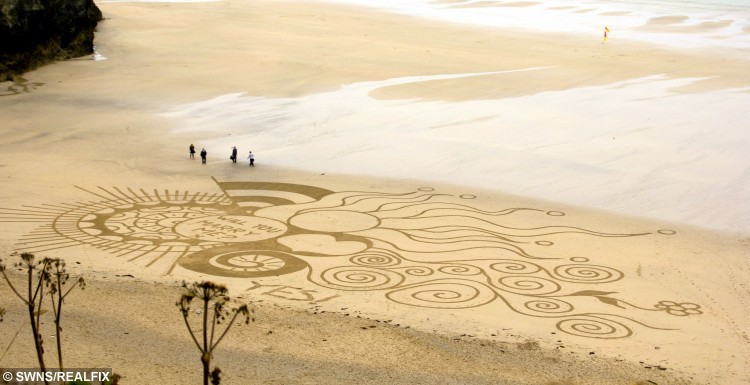