by RealFix
in Relationships, Top Stories
0

A little girl who dreamed of owning a hand-painted gypsy caravan finally got her wish 80 years later when her devoted husband bought her one.

Flo Essex, 87, and husband Jim, 91, met at a fairground as teenagers, when brightly decorated wooden caravans were still a common sight on the roads.

Now they have one in their back garden, which was built in October 1930, the same month and same year that Flo was born – fulfilling a childhood dream that her dad promised would one day come true.

It was a gift from her husband of 70 years, who spotted the wooden wagon for sale in a classifieds ad and knew it was the perfect gift.

They celebrated their platinum wedding anniversary with a party organised by friends and wellwishers in Yeovil, Somerset, where they tied the knot on October 11 1947.

Flo said: “We always work together – it’s not as if we don’t have arguments but we talk them through. I can’t believe it’s been 70 years – where has the time gone?”

They got married less than a week after Flo’s 17th birthday in a white wedding at a now defunct-church.

Jim was 21 at the time, and says the secret to long-lasting love is ‘happiness – the Lord in your heart, a lovely wife.’ 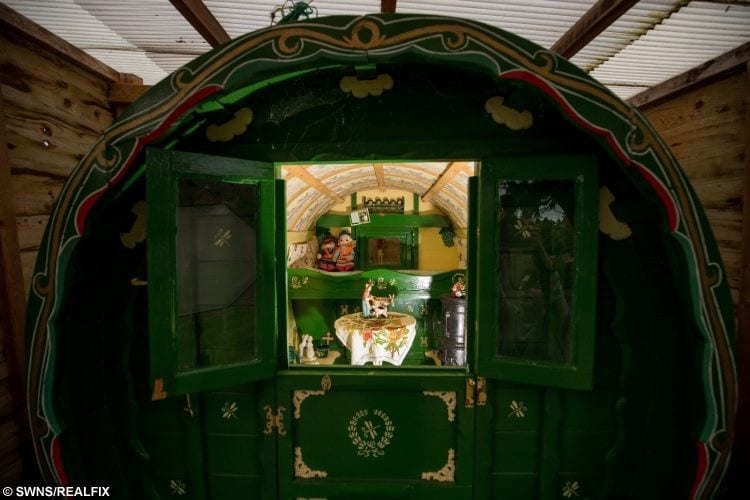 He added: “We are very happy together.

“You have got to be grateful for what you’ve got. I would wish other people the same.”

Three years ago he was flicking through a classified ad when he spotted the painted caravan that now sits in their back garden for sale, for £3,000.

Flo said: “My dad used to say to me ‘one of these days I’ll make you one,’ but he never did.

“I always loved them, when the fair came to town.

“I used to say to my dad ‘aren’t they lovely,’ and he said ‘by hook or by crook you’ll have one.’ Later I just forgot about it.

“But then Jim saw one advertised about three years ago and he said ‘it’s got to be.’

Her father, Benjamin Thorne, came from a travelling family and had 11 children with his wife, also named Florence.

Flo was the youngest child, and is receiving palliative care for stomach cancer.

Her health problems make it a struggle to climb the steps and go inside the embroidered interior into the caravan she always dreamed of but she loves to admire it.

“Jim told me ‘one day we will have that caravan and sit outside and have a cup of tea,’ but I’m a bit limited at the moment,”

“We love it now. I hope I will feel better and we can have a cup of tea in the sunshine.

“Everybody says how lovely it is we are still together.

“That was my wish, that we would be able to reach our anniversary.”

The couple first set eyes on each other in a fairground, and from that point on they were inseparable.

In their younger years they sold logs door-to-door, picked strawberries and apples and dug potatoes, and worked as painters and decorators – all in order so they could work together. 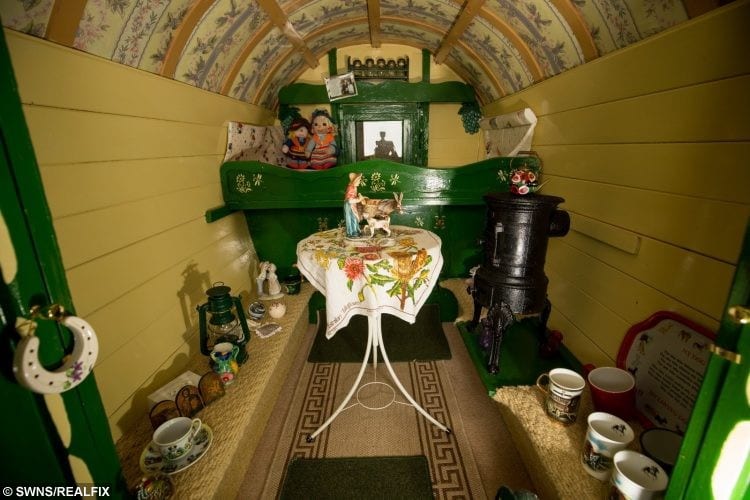 Over the years they have raised about £160,000 for Yeovil District Hospital and raised thousands of pound for other charities, leading them to be awards an MBE each as well as the Pride of Britain award.

The fun-loving couple have not let their age hinder them, and Jim became the oldest person to go on a zipwire in Cornwall just before Christmas last year.

They never had any children but took particular pride in buying the hospital’s first incubator, where twin baby boys were cared for.

Flo said: “They were so small you could put both of them in the palm of your hand, and they needed special equipment.”

Wellwishers sent cards and flowers from around the world, as far away as America, New Zealand and Australia.

Flo, who celebrated her 87th birthday on October 5, said the caravan was “the best birthday present I ever had.”

Adoring Jim said: “When I saw it advertised I said to myself ‘that caravan would do for my wife – it was the same year she was born in.’

“It is a lovely thing to have. Years ago they used to pull them along the road, I used to see them when I was a little boy working in the fields.

“They were for grown ups and children to sleep in, with a stove.