A middle-aged woman and her husband who she started going out with when he was 16 are celebrating their tenth anniversary – despite a 29-YEAR age gap. 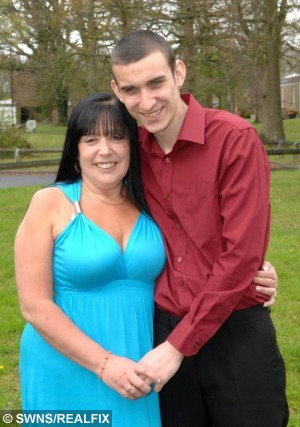 William Smith was just a teen when he fell in love with his best mate’s mum, Marilyn Buttigieg, then 44.

The pair came under fire from family and friends for the whopping age gap when they soon became an item.

But they feel they have proved their critics wrong because they’re still together.

This year marks their tenth year together – and in April they celebrated their sixth wedding anniversary.

Grandmother-of-eight Marilyn, now 54, said: “The age gap doesn’t matter. Age is just a number and it’s about time people got over it.”

William, now 25, reckons it was love at first sight when he clasped eyes on his mate’s mum – after being invited round to play computer games.

William, who unusually took his wife’s surname when they got married, said:”Three or four months went by, then another couple of months.”

“I didn’t have the courage to say anything about it, probably due to the fact of the age gap, and the fact she was my mate’s mum.”

When he finally asked her out, the mum-of-seven dumped her then husband and entered a relationship with the teen.

The couple, from Crawley, West Sussex, came under a lot of criticism from people who disapproved of the 29 year age gap and predicted the marriage was doomed to failure – and Marilyn’s children have all but cut off contact with the loved-up pair.

Marilyn, who works at a doctors’ surgery in Crawley Down, said of their marriage: “I couldn’t wish for anything better than my marriage and husband.

“We proved all critics wrong. Everybody was saying it wasn’t going to last – we’ve proved we are a real thing.”

William added: “I don’t look at Marilyn and think, ‘She’s nearly 30 years older than me.’ She’s a nice person so age doesn’t matter.”

Mum-of-seven Marilyn said she and William still had to put up with people giving them the occasional odd looks in the street.

Previously-wed Marilyn added: “I suppose we always will but people should realise by now after all these years it’s a real thing and let us be. We thought it would stop.

“We would always have the odd looks, we don’t really care to be honest.

“We’ve had so much grief over the years nothing shocks us any more. The age gap doesn’t matter.

“Age is just a number and it’s about time people got over it.”

Marilyn hates her ‘cougar’ tag, and insists there are double standards for men dating younger women.

Like many young husbands, William said he had noticed how time seemed to be flying by as he and his wife built their life together.

He said: “Everything is good in our relationship. I just cannot fathom where the time has gone. Our main goal is to make more memories.

“Hopefully time slows down a bit because it’s going too quickly.”