She was 16 and he was a Chippendale. Was their relationship doomed from the start?

As the sun shone through the window, I smiled.

“Morning,” Randy whispered, kissing me. It was how he woke me up every morning.

“Good morning,” I giggled, kissing him back.

It was just me and him against the world, which is how it had always been.

“Do you know what day it is today?” He continued, beaming.

Randy laughed. “Can you believe its 22 years today?”

“They said it would never last,” I laughed, “How wrong they were.”

I dozed dreaming about how we met.

It was August 1992, I was 16 and as the train pulled into London, I squealed with excitement.

I loved travelling from my home in Ilford, Essex to London to watch west end shows.

Donning low cut jeans, a tight top and a deep fake tan I felt amazing. “I’m going to bag myself a Chippendale,” I told my sister, Lesley, then 26.

As we approached the Strand theatre I looked at Lesley and laughed, “Here we go!”

Giddy with anticipation, we plonked ourselves right at the front. Minutes later, the lights went down and music boomed round the auditorium.

Soon, over 20 ripped men were gyrating on stage in just collar and cuffs.

Seconds went into minutes and we lost track of time as we watched men thrust in next to nothing.

Lesley leaned in, “he keeps looking at you!” She pointed at the toned man hanging from set scaffolding.

Weirdly, I’d been looking at him too. He was stacked with rippling muscles and kept smiling at me.

Every time he came on a smile crept across my face. “He is hot!” I shouted to above the music.

“I’d have them all,” Lesley replied laughing!

Before I knew it, it was the finale and we were on our feet.

Suddenly the guy I’d been watching started waving. I looked behind me, is he waving at me?

As I looked behind again he mouthed, ‘no you!’

Butterfly’s danced in my stomach and I smiled as the curtain went down.

“Come on,” I told Lesley, pulling her up.

I swooned when I heard his American accent. “I’m Randy.”

“Did you enjoy the show,” he continued, edging closer.

His frame shadowed my petite frame. “Fancy grabbing a coffee?” He asked.

I kissed Lesley goodbye and excitedly waited for Randy to change. My stomach flipped.

He was built like a Greek god and I was about to go out with him.

An Essex girl and a Chippendale, I smirked as I waited.

Suddenly the stage door opened and he looked just as good in clothes. “Right let’s go!” He said, putting his giant arm around me.

As we walked to Covent Garden we didn’t stop talking.

I had to take quicker steps to keep up with his strides.

Randy was 26, he was the all American boy from Idaho. A football golden boy, turned professional ballet dancer, turned Chippendale.

There was an age gap of 10 years, but it didn’t even enter my mind.

He was so charming and respectful. “You’re beautiful,” he said. I blushed.

On the way home I couldn’t stop thinking about him.

We had agreed to meet the next day, he was only going to be in the UK for three months.

That morning I woke up full of excitement. I rushed downstairs and into the kitchen.

“Excuse me,” my dad asked, “where do you think you’re going dressed like that?”

I looked down at the tight dress I was wearing.

I laughed and kissed him on his head. “I won’t be back late.”

Like most dads, he’d always been protective of his little girl. Imagine his reaction if he actually knew I was meeting an American stripper 10 years older than me?

The train journey into London couldn’t move fast enough. He was taking me to see the ballet and I couldn’t be more excited.

I fussed with my hair as I wanted to look perfect. I’ve not been this happy in ages.

As I got to Hyde Park I saw Randy standing with a red rose. “I couldn’t stop thinking about you,” he told me.

He leaned in and gave me a big kiss.

By the end of the day, we were smitten with each other.

“I’m glad you waved at me,” I confided, as we walked out of the theatre.

“I couldn’t see another girl in the room,” he whispered, “I want you to be my girlfriend.”

In that moment, I knew he was the one.

Randy was in London for three months, we didn’t have long together. But not everyone was ecstatic about our relationship.

“It will never last,” said my friend Amy said, “he’s older, American and a stripper!”

But I shook it off, “I think it might you know!”

I had never had a serious relationship before and the age gap was more apparent to others.

I put my hand to my mouth and gasped, I loved him?

As the days rolled into weeks, me and Randy grew stronger and stronger. Two weeks in, it was time for him to meet my parents.

“Are you worried about the age gap?” Randy asked, as we approached my house.

“No, I’m worried that you’re a Chippendale!!” I joked.

Despite my parent’s initial concerns, my mum welcomed him into our home with open arms.

“Lovely to meet you,” she said.

My dad shook his hand firmly giving him the once over. Fortunately, they were more interested in his career than his age!

“So you’re a stripper?” Dad asked, grabbing him a beer.

Everyone laughed. He was a hit.

Three months passed quickly. “I want to be with you forever!” Randy told me before he boarded the plane back to Idaho, America.

Although we were on opposites sides of the world, our love stayed strong.

That Christmas Randy took me home to meet his parents. “Don’t be nervous,” he coaxed.

Unfortunately despite Randy’s kind words, it wasn’t quite as smooth as we hoped.

“Aren’t you moving too fast?” his mum said over dinner, “You’re very young.”

“We love each other Mom!” Randy interrupted.

Over the next weeks his parents questioned our whirlwind.

“They just haven’t been around us long enough,” Randy consoled me.

Although I could tell his parents didn’t agree with the fast pace, they were kind to me.

I stayed for two months and fell even more in love.

In February, I flew back to Essex, leaving Randy behind. Thankfully we didn’t have to be apart long.

Two weeks later Randy came back for me.

“It’s our half year anniversary,” He joked, as we strolled around Valentines Park.

“How do I love Thee,” he recited and then got down on one knee, “Will you marry me?”

“Yes!” I cried, putting my hands to my mouth.

But not everyone shared our enthusiasm. “We’re worried it’s too soon,” I heard Randy’s mum say down the phone.

His face fell when he hung up the phone, “My parents can’t make it.”

“We’ll have a separate celebration with them,” I said, knowing they would be upset.

In true whirlwind tradition we married one month later in March.

“You look beautiful,” mum said, beaming, “are you happy?”

“Then that’s all that matters to me,” Mum continued, giving me a big hug. 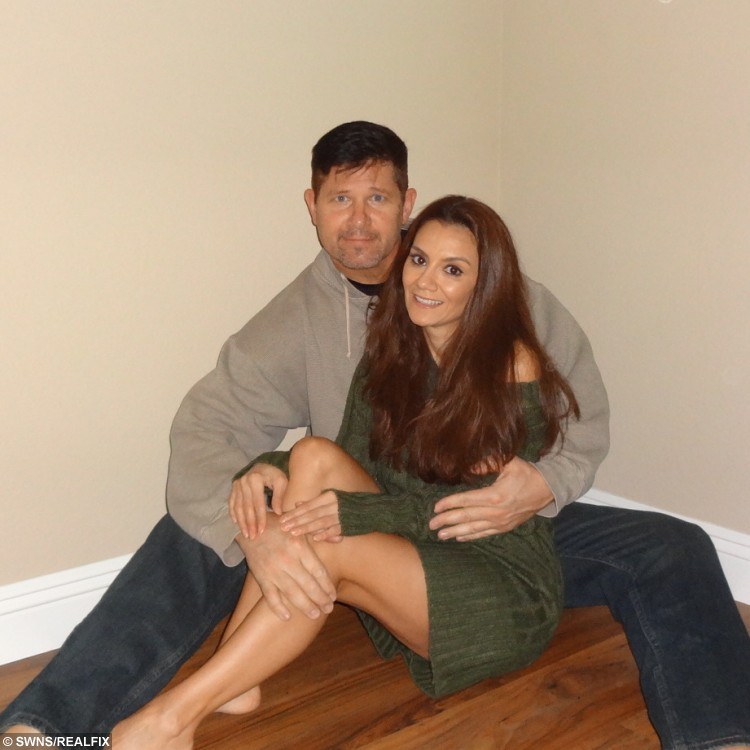 Heartbreakingly, his parents couldn’t make it. It was just my family there.

They told us it was because it was short notice, but I questioned if they disapproved.

We married in a small ceremony in Barking church.

I wore a short white dress, surrounded by friends and close family.

“I will be with you forever,” Randy said looking at me, “mark my words.”

“I hope we prove everyone wrong,” I told him.

Within the space of seven months we fell in love, got engaged and married. I’m the luckiest girl in the world.

In August, five months after marrying, I moved to Las Vegas, to be with him.

Randy hung up his stripping days and became a waiter.

I worked as an actress and we built a nice little nest.

Sadly, I found out I couldn’t have children.

Today, 23 years on, and we proved everyone wrong.

“You’re the only stripper for me.” I told him.

People often say an Essex girl and a Chippendale was a weird match. But I say it’s a match made in heaven.

‘How could they airbrush my perfect daughter?’ Mum’s fury at photography firm

The sound of whipping and spanking starts a feud in the suburbs..

The sound of whipping and spanking starts a feud in the suburbs..