An elderly couple have finally had their dream wedding almost 60 years after first tying the knot when they were too poor to do it in style.

Rose Brookman, 79, had always dreamed of walking down the aisle in a white dress with childhood sweetheart Harry, 81. 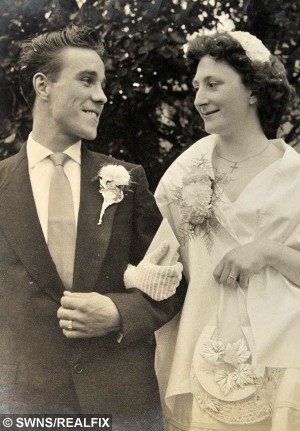 Their first wedding in 1956 was rushed

But they were forced to settle for a low-key event at a registry office in 1956 after Harry, one of 13 children, was told to leave home because his family was too big.

By then he and Rose had been dating for seven years after meeting when they were 13 and 15 outside a cinema where their respective dates stood them both up.

With nowhere else to go, Harry was told he could live with Rose’s family – as long as they married to appease local gossips.

Just 10 people attended the ceremony where Rose wore a summer dress and carried a white Bible instead of flowers and there was no reception and no honeymoon.

Now, 59 years later, Rose, who is battling leukaemia, and Harry, a retired plasterer, got their dream day thanks to a social media campaign organised by their family.

Rose walked down the aisle of a church in white supported by her SIXTEEN grandchildren and great-grandchildren.

The couple then celebrated with over 100 guests in a marquee on the lawn of their supported housing bungalow.

The big day was arranged by their daughter, Beverley, and Rose and Harry’s granddaughters who created a Facebook request asking for wedding donations. 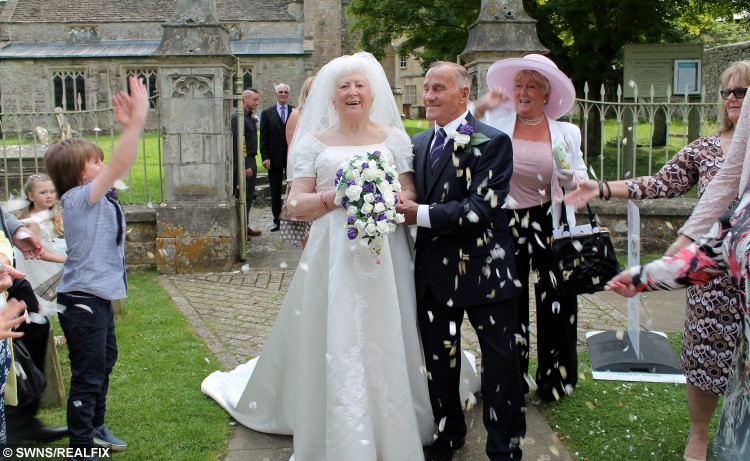 The couple had all the trimmings

The family, from Swindon, Wilts., were inundated with gifts including ring cushions, bridesmaids dresses, cake, flowers and hand-made invitations.

Mum-of-four Rose, a retired nursing auxiliary, said: “It was absolutely fantastic, it was a brilliant day.

“It was everything I wanted and more, it was so beautiful. I wouldn’t be able to pick a favourite part because it was all so amazing.”

She added: “The whole thing was Beverley’s idea. She was looking through my old wedding pictures and she said ‘mum, would you and dad like to do it again properly’.

“I’ve always missed the walking down the aisle bit and everything because we got married in a registry office because my husband was flung out to make room for siblings.”

“Beverley said ‘you’ve always wanted a big white wedding, why don’t you let me do it for you know?’ I told her I’m nearly 80 and she said ‘yeah, so what?’

“It’s incredible everything the local people have done, we just can’t believe it, we’re so grateful. The whole day was so nice and relaxed.” 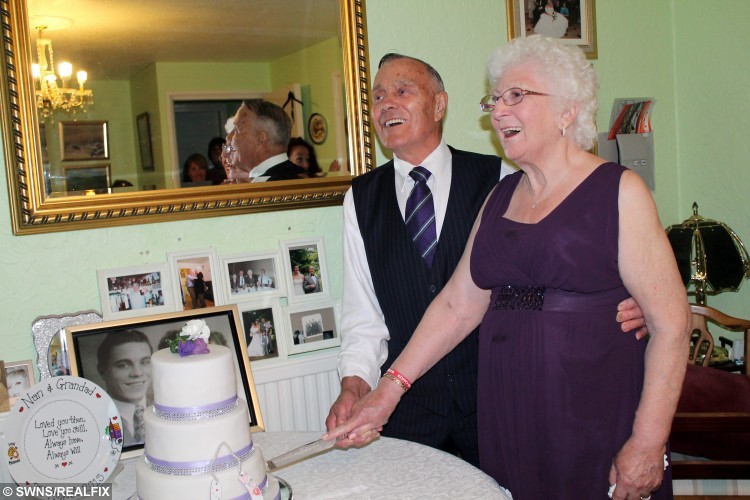 So many people donated to the special day

Rose and Harry, whose first wedding was on August 18, 1956, even stuck to tradition by spending a rare night away from each other the night before the blessing.

Rose was led down the aisle at 2pm by her son Ian and carried a bouquet adorned with photos of her late father Clarence and brother Barry.

After renewing their vows the couple served homemade beer and jellied eels at their buffet to cater for their London friends and family.

The pair enjoyed their first dance to Elvis Presley’s Love Me Tender before finishing relatively early so as not to keep their neighbours up. 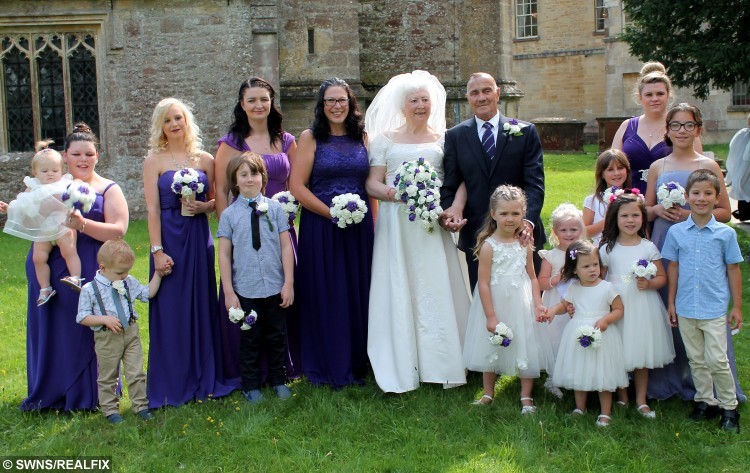 Daughter Beverley said planning the wedding blessing alongside her daughters, had been a full-time job.

She added: “It’s something that has taken over our entire lives, we’ve been staying up until three in the morning but it was worth every minute

“I think I’ve been Bridezilla in all of this, but the response has been more than we could have wished for.

“We’re so grateful to people in the community who have helped make my mum and dad so happy.”

« Previous post Would you let your 14 year old do THIS by himself?
Next article » Don't judge me! Autistic eight-year-old boy creates cards to explain behaviour to strangers