The secret to 50 years of marriage and it might just surprise you!

William aka Conrad and Doreen Joseph who have celebrated their golden wedding anniversary after meeting as bobbies on the beat. See NTI story NTIWED. It was in 1961 when serving in Walsall Borough Police that Conrad was standing with his sergeant when he saw Doreen walk by. As soon as he saw her, he said to his boss; ÃSee that girl there. Well thatÃs the girl IÃm going to marry.Ã And four years later they did!" Conrad joined Walsall Borough Police as a cadet in 1954. He was based at Walsall and Bloxwich police stations becoming a fully-fledged PC in 1954. In 1961 he joined the CID and served 25 years up until he retired in 1986. He was one of the arresting officers in the infamous Raymond Morris case - better known as the Cannock Chase murderer. His soon to be wife, Doreen Rowley, joined the force in 1961 and served as a PC until 1965 when the pair married.

A crime-fighting couple who met as serving police officers have celebrated their 50th wedding anniversary and revealed the secret to their long marriage is – having blazing rows.

Conrad Joseph, 76, and wife Doreen, 74, met as bobbies on the beat in 1961 while they both worked for West Midlands Police.

Four years later the couple married and went on to have two children and six grandchildren.

And despite attending numerous domestic incidents during their time on the force – they believe the key to a healthy marriage is to have regular arguments.

The couple said they have both used negotiation techniques they developed as police officers to resolve their blazing rows over the years.

Former detective Conrad said: “Marriage is about give and take. One partner can’t be more dominant than the other.

“She’s been very loyal and understanding over the years. We’ve had some blazing rows but every successful marriage has those.

“It helps clear the air. Most people might not think of police officers screaming and shouting at each other because we usually have to remain calm.

“But the skills we learnt in the force to defuse hostile situations have definitely come in handy over the years.”

The pair met in Bloxwich, Walsall, West Mids., while out on patrol as Pcs for Walsall Borough Police in 1961.

A “smart-looking” 21-year-old Doreen Rowley caught Conrad’s eye, who pointed her out to his sergeant and said “I’m going to marry that girl”.

He asked her out for a drink and four years later on September 25, 1965, the pair were married at St Mary’s and All Saint’s Church in Walsall.

Doreen left the force later that year to raise the first of her two children and Conrad went on to become a detective constable with West Midlands Police.

They moved to Lichfield, Staffs., after Conrad retired in 1986.

Conrad added: “When I first saw Doreen I thought she was very smart-looking and had a lovely smile. That was what drew me to her.

“We’ve had a fantastic marriage and we could not be happier.

“We shared a love of helping our community and catching crooks but now we are just devoted to one another.”

Conrad – who became a Pc in 1954 – played an integral role in the arrest of the infamous Cannock Chase murderer Raymond Morris.

Dad-of-two Morris was jailed for a minimum of 30 years in 1969 after being convicted of abducting and killing seven-year-old Christine Darby.

He was caught after Conrad and his colleagues linked him to an Austin A55 which was spotted near to where Christine’s body was found.

Conrad added: “I was very pleased when he was convicted and even happier when he died. He was a despicable, horrible man.

“Myself and another detective investigated him and put together a nine-page report of our enquiries and handed them to the inspector. He read it and said ‘go and arrest him’.

“It was the biggest theft from the Royal Mail since the Great Train Robbery in 1963.”

Doreen added: “I think tolerance and a sense of humour are the key to a lasting and happy marriage.

“The first time we met I was on the beat in Bloxwich. I don’t remember seeing him but he saw me walk past while he was talking with his sergeant.

“He did all the running, I didn’t chase him.”

“Later he came up to me while I was on duty and asked me if I wanted to go for a drink.

“I remember he was very pleasant and chatty and he was committed to his job. That impressed me.

“My fondest memories of our time together are the birth of are children and our grandchildren. This has brought us great joy.”

She added: “In those days it was rather more difficult to be in the police and have a family life. Conrad’s hours were very long.

“Having been in the police myself it made things easier because you have a fair amount of understanding of the job and why they work so hard.”

Last week they celebrated their Golden Wedding anniversary with a meal with 28 close friends and family members.

But they were stunned when police officers appeared at the The Golden Cup pub near Lichfield, Staffs., to surprise them with a bouquet of flowers.

PC Simon Bytheway and Sergeant Lee Nicholls presented them with a card signed by West Midlands Police officers, thanking them for their loyal service over the years.

Doreen added: “I was absolutely dumbstruck when the police came in. I wasn’t expecting it at all. It was a lovely surprise.”

PC Bytheway said: “I’m based at the same police station where they first met half a century ago.

“When we found out that they were celebrating such a milestone celebration, we knew such an important occasion for these former fellow officers couldn’t go unmarked.” 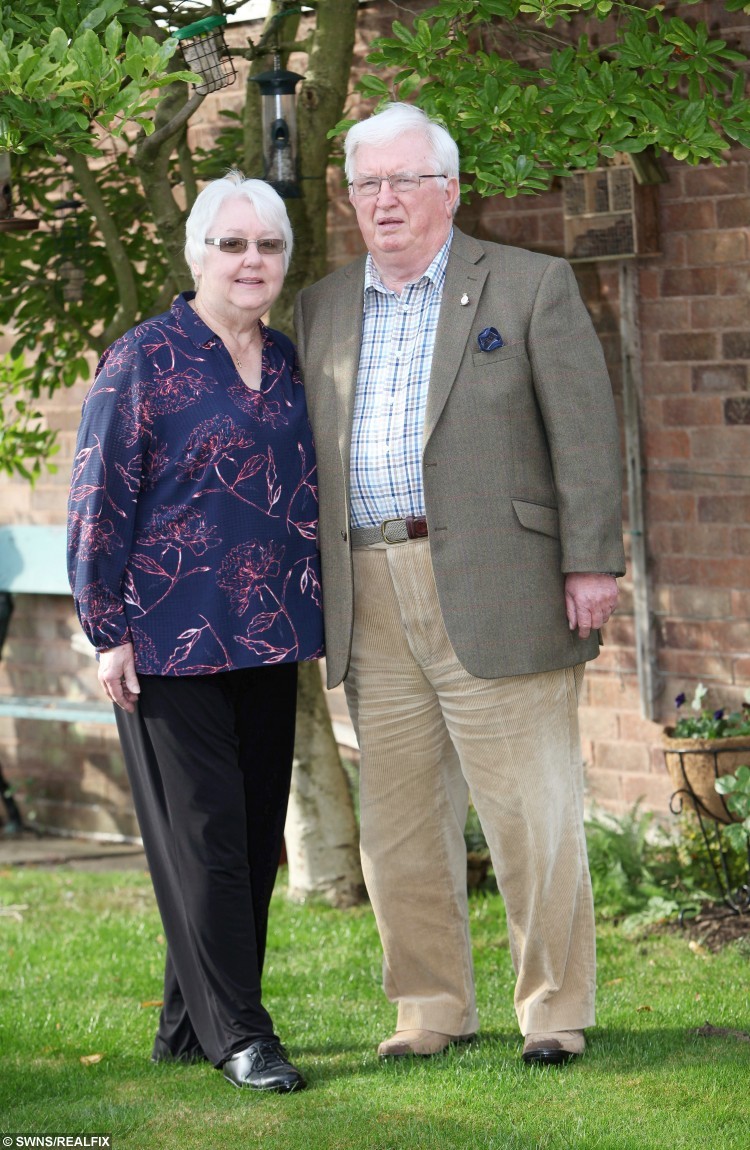