by RealFix
in Must Read, Relationships, Videos
0

This groom proves he’s head over heels for his new bride – when he picks her up during their first dance before losing his footing and crashes onto the stage.

Lawrence Satow, 30, was celebrating tying the knot with girlfriend-of-seven years Victoria, 29, when he scooped her up in his arms at their reception on Saturday (1/7).

With Macklemore’s ‘Can’t Hold Us’ playing, the over-enthusiastic entrepreneur began twirling Victoria around the dance floor.

But the manoeuvre didn’t go to plan as Lawrence span Victoria, who works in agriculture, round and round until he completely lost control.

The hilarious 28-second clip shows the couple crashing into a huge speaker before landing on top of each other on the stage.

The video of the couple’s disastrous first dance has since gone viral with more than 30,000 people viewing and sharing the clip.

The red-faced newlyweds flew out on their honeymoon to Mykonos, Greece, on Sunday (2/7) after the wedding at St Lawrence’s Church in Brookside, Hereford.

Lawrence, of Drewsteignton, near Exeter, said: “I think the video speaks for itself, the whole thing was fairly brutal.

“It wouldn’t be an over exaggeration to say that it was one of the most humiliating moments of my life so far.

“The routine was completely off-the-cuff, we hadn’t planned it at all and were just going to go with the flow.

“Victoria chose the song, and it’s not one that I’m massively familiar with, so initially I didn’t feel too confident about it.

“But as it went on, I started to feel as though we were getting the hang of it.

“The watchers-on were cheering, and I thought I might as well try something a bit ambitious – it was our first dance, after all.

“I know that Victoria isn’t at all heavy, so I decided to lift her off the ground and spin her round, like they do in Strictly Come Dancing.

“But the floor was slippery, I think some beer or maybe some limoncello had been spilled, and I was obviously wearing uncomfortable shoes.

“I lost my footing, and very quickly we were heading back towards the stage.

“As we were falling backwards, all I was trying to do was make sure that Victoria fell on top of me, rather than vice-versa.

“I would probably have crushed her.

“Thankfully neither of us were hurt at all, and everyone in the crowd found it absolutely hilarious.

“The music was still playing, and people were looking on at us and willing us to continue, so we did. 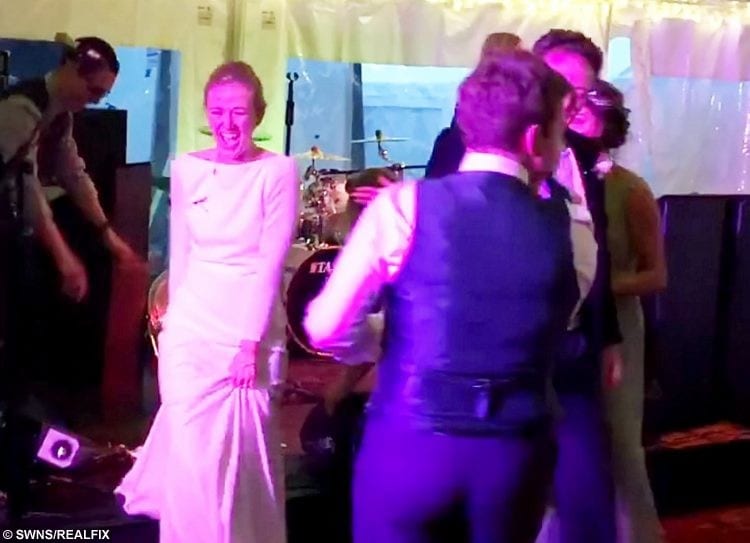 “There’s something terribly British about that, I think.

“It’s the ‘Keep calm and carry on’ spirit.

“Everyone was laughing and taking the mickey out of us afterwards, and I must say I’m very embarrassed now that video of the whole thing has surfaced.

“Fortunately we went off on our honeymoon the next day, so I was able to escape a lot of the banter.

“We’re due to come back home on Friday (7/7), but we’re both tempted to stay out there for the foreseeable future to spare ourselves a bit of embarrassment.”