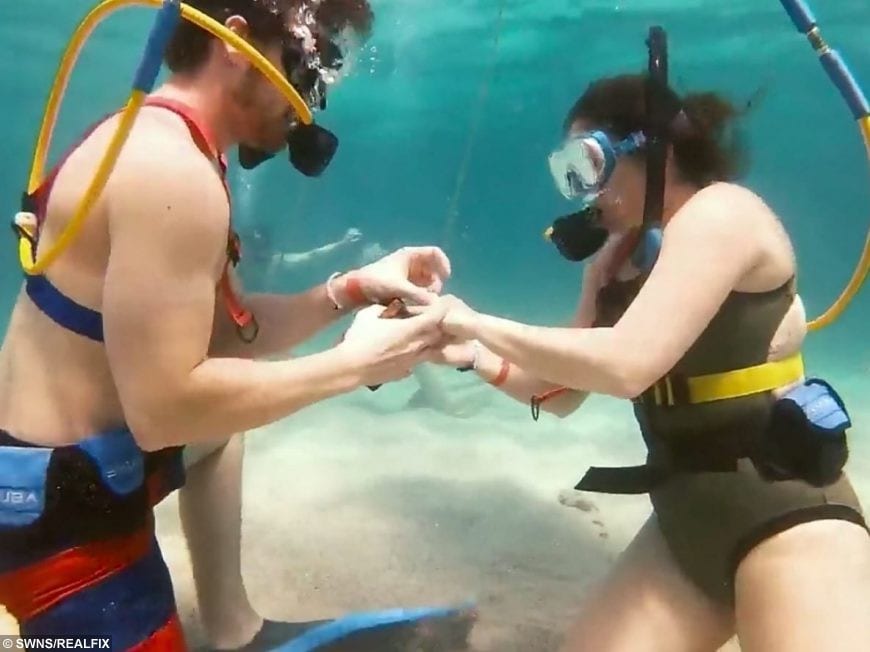 This is the touching moment a man proposed to his girlfriend – 30ft deep in the Caribbean Sea.

The motion graphics designer had taken months to devise the unique proposal, which was inspired by Kenna’s love of the ocean.

Kenna, 24, gave an effervescent “yes” and their unifying kiss was a hilarious clash of oxygen masks.

“I will never forget Travis’s proposal. It blew all of my expectations out of the water,” said Kenna, a paralegal.

Travis, of Lawrenceville, Georgia, USA, invited Kenna on a trip to Punta Cana, Dominican Republic, after he’d secretly booked a boat and prepared his GoPro camera to capture the moment.

Kenna, his girlfriend of four years, was delighted to embark on the couple’s first ‘snuba’ – a dive where the oxygen pipe connects to the boat, rather than a tank on the diver’s back.

Travis panicked about losing the expensive ring during the dive but the plan went off without a hitch, on April 27, 2019.

Kenna said: “Travis was insistent on wearing this fanny pack and I couldn’t understand why, but I just tried to forget about it.

“He even wore it into the water, which I thought was very weird, but I didn’t put two and two together.

“The snuba was incredible, it is so beautiful down there. The instructor started to gesture for us to get together for a picture on our GoPro towards the end of the dive.

“I stood up and when I looked down Travis was on his knee holding a little treasure chest. I opened the box and it was the most beautiful treasure I could have imagined.

“I started screaming. It was the most special moment. We even kissed through our masks.”

“She loves the water and she recently became scuba (corr) certified.

“I had a company work trip coming up in April and I just thought it would be a great idea to invite Kenna along and propose underwater.

“I ordered a couple of different treasure chests beforehand, to make sure the ring wouldn’t budge during the dive.

“When she saw the ring she started screaming underwater and gave me the thumbs up.

“And when we got to the surface there was even more screaming.

“Two of our friends accompanied us on the trip and it was nice to share the moment with them.”

Kenna and Travis, who first met at a beer carnival in 2015, celebrated their engagement at a beach party, right after the boat trip.

Travis said: “It was the last night of the trip and we celebrated on the beach.

“We had a lot of champagne and everyone was celebrating with us.”

Kenna added: “It was the most special day.

“I love Travis, I love his spirit, his personality and how he gets me. I can’t even put my feelings for him into words.”

Kenna and Travis plan to wed in March 2020, but the event will most likely take place on land.

Travis said: “People have definitely joked about that. They’ve asked us if we are going to get married underwater too.”

Kenna added: “I think the wedding will definitely take place on land. In fact we plan to get married on my dad’s property in Georgia.”

« Previous post Old Dog Up To The Same Old Tricks - Adopting Half A Dozen Ducklings After Their Mother Suddenly Disappeared
Next article » Mum Nearly Died After £5,000 'Mummy Makeover' In Turkey