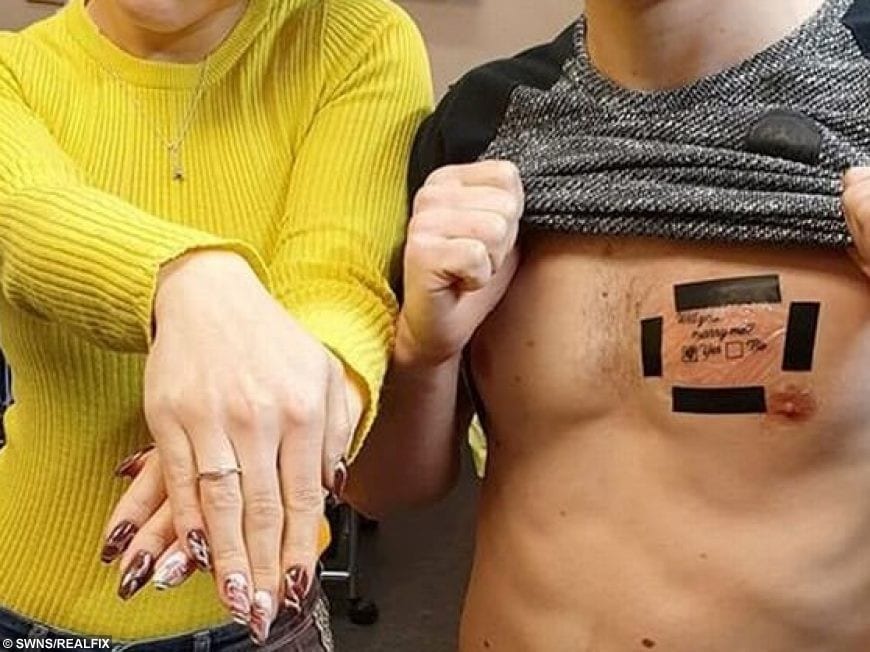 This brave man proposed to his girlfriend with a ‘will you marry me tattoo’ including a yes or no tick box for her to fill in.

The unnamed pair got engaged in the bizarre fashion in an ink parlour in Gloucester.

Luckily the woman saw the romantic side and checked ‘yes’ with a heart – which was then also inked on.

The proposal was published on Facebook by the tattoo shop, Gods of Ink.

A post said: “What an amazing way to propose. Juris’ client had ‘Will you marry me’ and 2 boxes for yes or no on his chest.”

“His girlfriend who was with him and had no idea what he was having done was shocked by his proposal and she happily ticked the Yes box.

“Congratulations to you both. The ring is on the opposite finger as they are from Bulgaria so wear the ring on the right hand.”

Several people wished the couple the best of luck on social media.

One woman said: “Such an amazing couple, so happy for you both.”

But not everybody was so sure – with the inevitable “imagine if she’d said no!” and “what a risk” comments also posted.

Juris Jurison, has worked in the tattoo parlous for two years, carried out the work.

He said that it wasn’t “a common occurrence” – but was still a fan of the idea.

He said: “It was rather unique. It reminded me of being at school when you wrote notes at school, asking your girlfriend if she wanted to go out with you.

“It was quite a random occurrence, he rung up about an hour before to ask if we could do it because either people wouldn’t do it or didn’t have space.

“When she came in the the main tattoo was already done and she said: “Oh my god I love you” and said yes of course. Then she drew in the heart and we tattooed that on.

“He was nervous at the beginning, but I think it is a really cool idea. ‘Carpe diem’, as they say.”