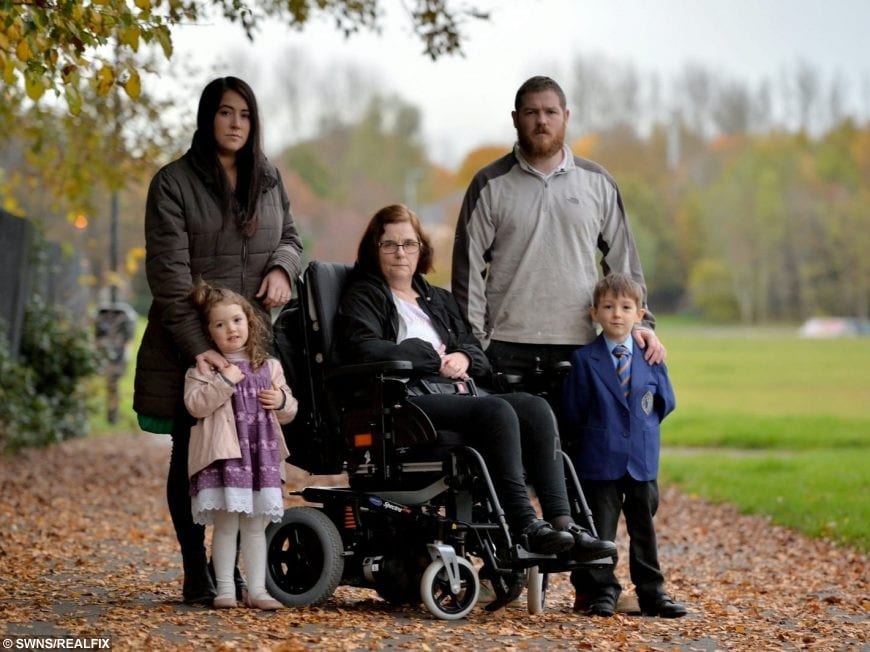 A family has been left devastated after plans to get their paralysed gran home for Christmas were put on hold as heartless thieves stole her son’s work tools for renovating a bungalow.

Agnes McElhinney, 64, suffered a spinal stroke a year ago and was left permanently paralysed.

She was due to leave The New Victoria Hospital, in Glasgow, next month to move into a new wheelchair-friendly home in Rutherglen, South Lanarkshire with her husband Patrick, also 64, who is recovering from leukemia.

Her son, Paul, 31, has been doing renovation work on it and took eight weeks off to focus on helping his mum.

The family had hoped to spend Christmas together.

But Paul, a father-of-two who runs his own business, Calma Contracts, was sickened to discover that his van had been stolen from outside his home, on November 4.

Agnes said: “Paul runs his own business and he wiped his diary for us to get work done to the house.

“We bought the house in October and there have been a lot of problems with it.

“Paul has been helping so I can get home for Christmas but that looks unlikely now – I’m devastated.”

Later on Tuesday, items from Paul’s van – including business flyers, children’s gloves and a kids car seat – were found thrown on the side of Fereneze Road in Barrhead, East Renfrewshire.

A dog walker called Paul and notified him.

Paul said: “It wasn’t just my tools, but my kids stuff too.

“To have just dumped them all in a muddy puddle and driven off, it made me sick.

“The entire family are devastated that Mum won’t be home for Christmas.

“It’s heartbreaking that the family won’t be together, even the kids are heartbroken.”

Despite nobody witnessing the theft, and Paul’s alarmed van not making a sound when it was stolen, he said neighbours were suspicious prior to the theft.

“We think they might have been scoping it out.”

Police are investigating the theft, from outside Paul’s home in Ashmore Road in Merrylee, Glasgow.

But the dad believes the culprits knew what they were doing.

He added: “I couldn’t believe it at first.

“I walked round the corner to double check, but I was sure I had parked my van there, then it slowly dawned on me that it was stolen

“There was no glass on the road or anything.

“It looks like they knew what they were doing and they’ve swiped it quickly without anyone noticing.

“We’re less than halfway through the work, we’ve just ripped out what was there so far.

“We were planning putting in a wetroom and ramps but now I’ve lost all my tools.

Paul said the theft has been upsetting for him and his fiancee Courtney Kruger, 27.

But he praised fellow tradesmen for lending him tools and helping him out.

He said: “I’ve grown up in that area my whole life.

“The guy I work with is giving me a lift about and I’m giving him a hand.

“It’s getting out of the house that’s more important right now.

“I’ve had people coming to me and saying I can borrow tools till I get back on my feet.

“It’s heartwarming the generosity of people in the industry.”

A spokesman from Police Scotland said: “A report was made to police that a transit van had been stolen from outside a house on Ashmore Road, Glasgow overnight.