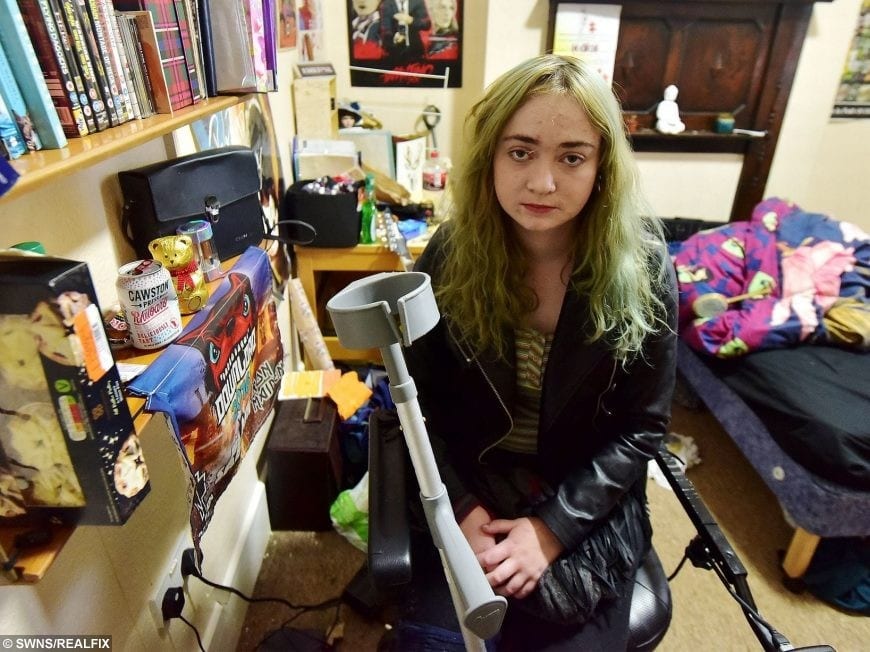 A disabled student has shed light on the alarming reality of living off Universal Credit – and revealed she had just £25-a-week to survive on.

Charlotte Elle, 20, spent two years toughing it out on the controversial benefits scheme.

She was forced to visit foodbanks, scour supermarkets for massive discounts and even forfeit washing her clothes for weeks during the hellish period.

Although her rent and bills were covered by the payment structure she was left with little else to spend on essentials – leaving her constantly anxious.

Charlotte has now started a course at the University of Bristol, so receives a student loan.

But she can still remember the desperate times – and said she even felt guilty for taking away from those more needy than her.

She said: “It made me really depressed and anxious. It was horrible. I was constantly worried I was going to run out of money.

“I felt guilty using foodbanks because there were so many families in there with children. I tried to use them only every few weeks.

“I spent a lot of time going to supermarkets buying things with reduced stickers.”

Charlotte claims that part of the problem was her year-long battle to get Personal Independent Payment (PIP) benefits – which is still unresolved.

This is despite suffering from a debilitating illness which means she has to use a wheelchair and regularly faints.

Charlotte says she has applied for dozens of jobs in retail but has experienced a lot of discrimination because of her genetic illness called Ehlers-Danlos Syndrome, which also causes muscle pain.

Her condition has deteriorated rapidly over the past 12 months and, although she used to be able to get around on crutches, now has to rely on her wheelchair most of the time.

She said: “I want to work. I have tried to get a job but employers don’t want to hire me. One employer said to me ‘you can’t work here if you have crutches’.

“I took this company to court and they agreed an out-of-court settlement – but it’s so frustrating it came to that.

“There is also not enough education on disabilities. As I use an electric wheelchair, I am often spoken to as a child. I have no mental disabilities, but people assume so.”

Charlotte is now waiting for the Department of Work and Pensions (DWP) to review her claim for PIP.

But she hasn’t heard back from the authority since November – even though she first applied for the benefit a year ago.

Charlotte said: “I want to raise awareness for other disabled people relying on PIP.

“I’m in a group on Facebook and so many people are having trouble accessing this benefit.

“Some of these people have really severe conditions and they can’t defend themselves.”

The DWP said it was were waiting for medical evidence to support Charlotte’s claim when contacted.

Charlotte has started a foundation course in Chemistry and Physics at university.

« Previous post 'I Have Inspired Her And I Can’t Help That' - Daughter Of NHS Nose Job Conwoman Carla Bellucci Asked For Botox For Christmas - Despite Only Being 14
Next article » 'I Was In Shock!' - Woman Shares Photos Of Makeover Gone Wrong