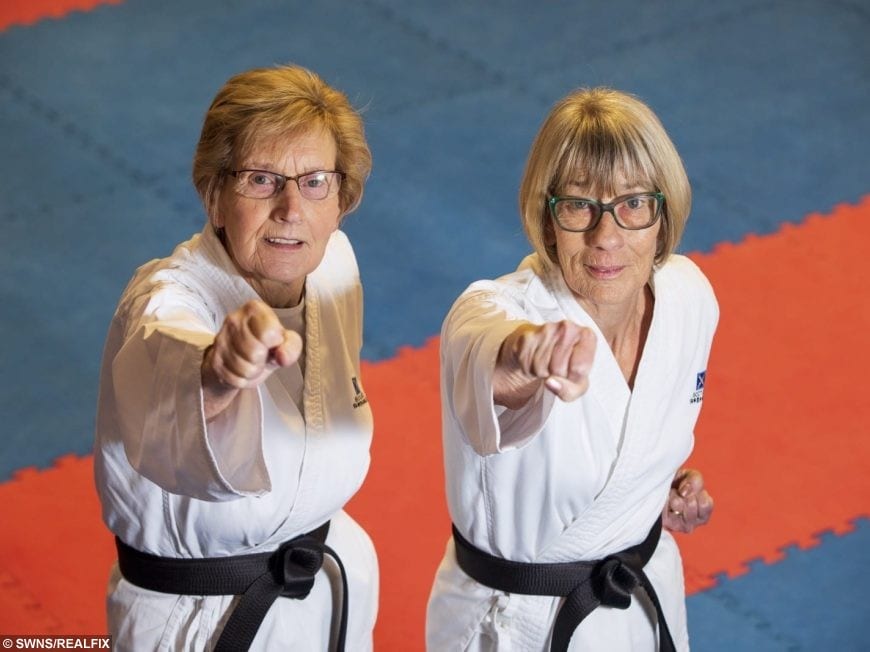 Meet the pair of pensioners who have become two of the oldest people in Britain to achieve black belts – in KARATE.

Sprightly Sheila Stewart, 72, and Isabel Murray, 77, took up the sport in 2015 when Sheila began taking her grandchildren to classes.

The fighting fit duo- both from Dalgety Bay, Fife – went through twelve grades from white belt, before being awarded their coveted black belts.

Under the guidance of fifth dan instructor Sarah Queen, who created a class for the pair to develop their skills, they have now achieved one of the highest ranks in the martial art.

The pensioners reached the rank on November 16 after four years of honing their fighting techniques at the Japan Karate Shoto Federation (JKS) Scotland headquarters in Dunfermline, Fife.

Marking the milestone, the delighted women were both given ‘special’ black belts from Japan, complete with their names embroidered on them.

Sheila, a gran-of-three and former hairdresser, said: “My grandchildren do karate and they had a fun day in Burntisland.

“I went along and Sarah was willing to do a class for seniors, so I thought I’d give it a go.

“Me and Isabel went along and the rest is history.

“We were a bit hesitant about our first grading but she [Sarah] thought we could do it and we passed, so we did the next one.

“It’s just gone on from there – it’s been amazing.

“We never ever thought we’d get to the stage we’re at now.

“Words really fail me, it was just wonderful – we were ecstatic [when given the belts]

“We couldn’t believe we’d got this far.

Isabel, a former delivery driver, said: “It was exciting, something I never thought I’d achieve, but perseverance and hard work I got there – I’m quite happy.

“Our first grading was in March 2016 and we just went on from there, but it’s been hard work.

“At our age the brain sometimes likes to go to sleep.

“It started off as fun and just a hobby, but we didn’t realise Sarah would take us further.

“It’s an achievement for her as well.”

Despite being hesitant at first about doing karate because of the combat element, mum-of-two Isabel is glad she decided to do it.

She said: “Sheila came to my door and asked if I wanted to go.

“I’ve never been into fitness like the gym but I’m into walking.

“She persuaded me and I’m glad she did – I enjoy it.

“It’s fun, exercise and a bit of self defence.

“People say ‘I don’t want to get on the wrong side of you now’.”

Despite achieving black belt status the pair show no sign of stopping.

“What we’d like to do is go over the katas again to refresh.

“It’d be nice to go through them and see how much we’ve remembered.”

Sarah, who coached Sheila and Isabel for four years, said: “They’ve been fun to teach.

“You need to encourage them to do some things but it’s been good for them and for me.

Despite their age, Sheila and Isabel only missed a handful of classes over the course of their four year training.

Sarah said: “They’re the oldest students in JKS at the moment.

“They’ve had to learn a certain group of techniques and come in and do them, which can be quite daunting at that age.

“They’ve progressed pretty quickly through it.

“They’ve missed one or two classes but we’ve encouraged them to keep going.

“Originally it was never an aim to achieve black belt but I pushed them to achieve it as quickly as they could.

“The four year period is a good time frame, as you get older it gets harder.

“We’ve got a lot of people that have trained for a long time but they didn’t start until an older age.

“One of our instructors is 67 but he’s been doing it his whole life.

“It’s not common to get someone starting karate in their late 60s-70s – it’s quite unique.”

Sixth dan Paul Giannandrea, lead instructor at JKS Scotland, said: “To see two elderly people start karate at that stage in their lives and follow through so consistently is a miracle.

“I can count on one hand how many days they’ve missed.

“That in itself is quite a challenge and a feat and the fact they’ve followed through and got their black belts is incredible.”

« Previous post 'Trying On The Dress Again Was So Surreal, It Absolutely Swamped Me!' - Shrinking Bride Lost Over 100lbs After Her Wedding
Next article » 'It's Shockingly Bad This Was Able To Happen' - Woman Suffering From Throat Infection Mistakenly Told She Had CANCER After Hospital Staff Fail To Spot Error In Letter